How Many Brown Dwarfs in the Milky Way?

Interesting news keeps coming out of the National Astronomy Meeting in the UK. Today it involves brown dwarfs and their distribution throughout the galaxy, a lively question given how recently we’ve begun to study these ‘failed stars.’ Maybe we need a better name than ‘brown dwarfs,’ for that matter, since these objects are low enough in mass that they cannot sustain stable hydrogen fusion in their core. In a murky intermediary zone between planet and star, they can produce planets of their own but straddle all our contemporary definitions.

At the NAS meeting, an international team led by Koraljka Muzic (University of Lisbon) has reported on its work on brown dwarfs in clusters. It seems a sensible approach — go to the places where young stars are forming and try to figure out how many brown dwarfs emerge alongside them. That could help to give us an overview, because the brown dwarfs we’ve already found (beginning with the first, in 1995) are generally within 1500 light years of the Sun. Cluster studies should help us gain some sense of their broader distribution.

Clusters, after all, give birth to all kinds of stars from tens of solar masses down to the brown dwarfs we’re looking for, and the so-called initial mass function (IMF) showing the distribution of the different masses in young clusters has received plenty of attention. A key figure in its earlier study was Edwin Salpeter, an emigrant from Austria to Australia who wound up teaching at Cornell University. His work on the initial mass function led to values still accepted today down to stars of about half a solar mass, but things below that get murkier. 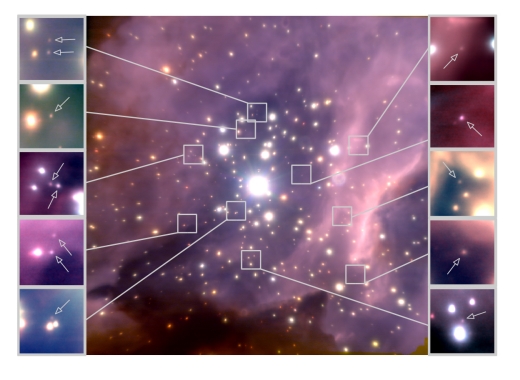 Image: False-colour near-infrared image of the core of the young massive cluster RCW 38 taken with the adaptive-optics camera NACO at the ESO’s Very Large Telescope. RCW 38 lies at a distance of about 5,500 light-years from the Sun. The field of view of the central image is approximately 1 arc minute, or 1.5 light-years across. Credit: Koraljka Muzic, University of Lisbon, Portugal / Aleks Scholz, University of St Andrews, UK / Rainer Schoedel, University of Granada, Spain / Vincent Geers, UKATC Edinburgh, UK / Ray Jayawardhana, York University, Canada / Joana Ascenso, University of Lisbon, University of Porto, Portugal, Lucas Cieza, University Diego Portales, Santiago, Chile. The study is based on observations conducted with the VLT at the European Southern Observatory.

Thus the need to update the IMF in the low mass range, a key part of what Muzic and team call Substellar Objects in Nearby Young Clusters, their survey to examine substellar populations in nearby star-forming regions. Recent studies have indicated that a single underlying initial mass function can explain the ratios of stars to brown dwarfs in the clusters studied. But most of the clusters studied to date have been loose groups of low mass stars.

Having already looked at five nearby star-forming regions, Muzic’s group chose to study brown dwarf formation in more massive, dense embedded clusters and homed in on the more distant cluster RCW 38, some 5500 light years out in the constellation Vela. This is a young cluster (less than a million years) that is twice as dense as the Orion Nebula Cluster and orders of magnitude denser than other nearby star forming regions. Packed with massive stars, it seems the ideal place to determine whether different starting conditions produce a different ratio of brown dwarfs to other types of star.

According to various BD formation theories, stellar density is expected to affect the production of very-low mass objects (high densities favor higher production rate of BDs), as well as the presence of massive OB stars capable of stripping the material around nearby pre-stellar cores until leaving an object not massive enough to form another star. In addition to the theoretical expectations, we discussed several observational hints for environmental differences in the nearby star forming regions from the literature, which, however, require further investigation. To that end, we choose to study a cluster that is several orders of magnitude denser than any of the nearby star forming regions (except for the ONC [Orion Nebula Cluster]), and also, unlike them, rich in massive stars.

Working with adaptive optics observations via the NAOS-CONICA imager at the European Space Agency’s Very Large Telescope, the researchers found values for brown dwarf formation that agreed with other young star-forming regions, even those much less dense. The results were clearcut, as the paper notes:

…leaving no evidence for environmental differences in the efficiency of the production of BDs and very-low mass stars possibly caused by high stellar densities or a presence of numerous massive stars.

In all regions studied so far, the star/BD ratio is between 2 and ∼ 5, i.e. for each 10 low-mass stars between 2 and 5 BDs are expected to be formed. This is also consistent with estimates of the star/BD ratio in the field (∼ 5; Bihain & Scholz 2016). The sum of these results clearly shows that brown dwarf formation is a universal process and accompanies star formation in diverse star forming environments across the Galaxy.

Interesting indeed! The brown dwarf population of the galaxy, based on this survey, is at least 25 billion and may range as high as 100 billion brown dwarfs, which would mean a brown dwarf for every hydrogen-burning star. The range results from the difficulty in observing such small, faint objects, raising the prospect that even the high number here may be an underestimate. Another cause for the variation: Star formation rates in the Milky Way seem to have been higher in the past. If this is the case, the 100 billion number seems more likely.

And note this: The calculations on the brown dwarf population were derived only for brown dwarfs more massive than 0.03 solar masses. Compare this to Jupiter’s mass, which is 0.00095 that of the Sun. Between the two is a wide range of possibilities.

“It seems that brown dwarfs form in abundance in a variety of star clusters,” says Ray Jayawardhana (York University), a member of the research team. “They are ubiquitous denizens of our Milky Way galaxy.”

The paper is Muzic, et al., “The Low-Mass Content of the Massive Young Star Cluster RCW 38,” submitted to Monthly Notices of the Royal Astronomical Society (preprint).

Next post: Toward a Planet Formation Model for Pulsars