All of the Juno spacecraft’s instruments — including JunoCam — were operational during its July 10 flyby, giving us a close-up look at the Great Red Spot. Now 16,000 kilometers wide, the storm has been studied since 1830 and may be considerably older than that. Juno’s orbit took it to perijove (closest to Jupiter’s center) at 2155 EDT on the 10th (0155 UTC on the 11th), when it closed to about 3500 kilometers above the cloud tops. The passage across the Great Red Spot occurred eleven minutes later at some 9000 kilometers above the clouds.

While the data are being unpacked and analyzed, we can enjoy the efforts of citizen scientists who went to work on the raw images posted on the JunoCam site and processed them, a procedure done in coordination with the Juno team.

“These highly-anticipated images of Jupiter’s Great Red Spot are the ‘perfect storm’ of art and science. With data from Voyager, Galileo, New Horizons, Hubble and now Juno, we have a better understanding of the composition and evolution of this iconic feature,” said Jim Green, NASA’s director of planetary science. “We are pleased to share the beauty and excitement of space science with everyone.” 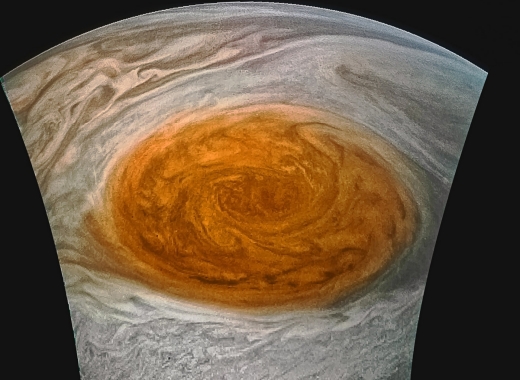 Image: This enhanced-color image of Jupiter’s Great Red Spot was created by citizen scientist Jason Major using data from the JunoCam imager on NASA’s Juno spacecraft. The image was taken on July 10, 2017 at 07:10 p.m. PDT (10:10 p.m. EDT), as the Juno spacecraft performed its 7th close flyby of Jupiter. At the time the image was taken, the spacecraft was about 13,917 kilometers from the tops of the clouds of the planet. Credit: NASA/JPL-Caltech/SwRI/MSSS/Jason Major.

And let’s go through the two others just posted by JPL.The one below was created by Kevin Gill, likewise working with raw data from the JunoCam imager.

And a final image from citizen scientist Gerald Eichstädt.

The English natural philosopher Robert Hooke (1635-1703) described what may have been the Great Red Spot in 1664, although he seems to have placed it on the wrong side of the Jovian equator, making the sighting problematic. The following year, however, Giovanni Cassini detected a ‘permanent storm’ that remained under observation into the 18th Century, although there are no observations between 1713 and 1830. The first certain record of the Great Red Spot occurs in an 1831 drawing by German amateur Samuel Heinrich Schwabe.

The red coloration of the Great Red Spot is problematic, with suggestions ranging from compounds of sulfur and phosphorus to organic material produced by high-altitude photochemical reactions or lightning discharges. The Voyager spacecraft returned spectacular imagery, including the Voyager 1 image in 1979 shown below, which revealed details as small as 160 kilometers and highlighted the spectacularly complex wave motion west of the Spot. 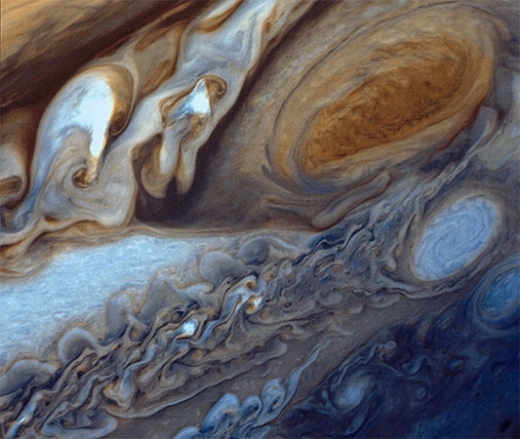 Image: Jupiter’s Great Red Spot (top right) and the surrounding region, as seen from Voyager 1 on March 1, 1979. Below the spot is one of the large white ovals associated with the feature. NASA/JPL

Since the Voyager encounters (and indeed, since the late 19th Century) the Spot has been shrinking. Voyager measured its length at 23,000 kilometers, and since 2012 it has been diminishing at a rate of about 900 kilometers per year. We’ll see what Juno can tell us about the giant storm’s energy source and its longevity as data are processed in the weeks ahead.

Next post: Laser SETI: All Sky All the Time