Frank Elmore Ross (1874-1960), an American astronomer and physicist, became the successor to E. E. Barnard at Yerkes Observatory. Barnard, of course, is the discoverer of the high proper motion of the star named after him, alerting us to its proximity. And as his successor, Ross would go on to catalog over 1000 stars with high proper motion, many of them nearby. Ross 128, now making news for what observers at the Arecibo Observatory are calling “broadband quasi-periodic non-polarized pulses with very strong dispersion-like features,” is one of these, about 11 light years out in the direction of Virgo.

Any nearby stars are of interest from the standpoint of exoplanet investigations, though thus far we’ve yet to discover any companions around Ross 128. An M4V dwarf, Ross 128 has about 15 percent of the Sun’s mass. More significantly, it is an active flare star, capable of unpredictable changes in luminosity over short periods. Which leads me back to that unusual reception. The SETI Institute’s Seth Shostak described it this way in a post:

What the Puerto Rican astronomers found when the data were analyzed was a wide-band radio signal. This signal not only repeated with time, but also slid down the radio dial, somewhat like a trombone going from a higher note to a lower one.

And as Shostak goes on to say, “That was odd, indeed.” 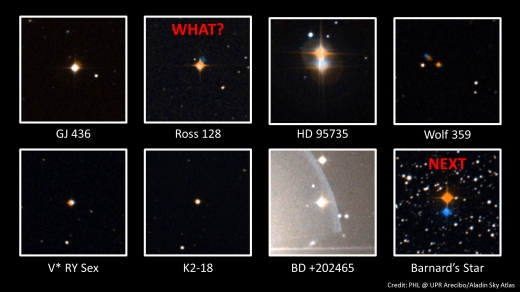 It’s this star’s flare activity that stands out for me as I look over the online announcement of its unusual emissions, which were noted during a ten-minute spectral observation at Arecibo on May 12. Indeed, Abel Mendez, director of the Planetary Habitability Laboratory at Arecibo, cited Type II solar flares first in a list of possible explanations, though his post goes on to note that such flares tend to occur at lower frequencies. An additional novelty is that the dispersion of the signal points to a more distant source, or perhaps to unusual features in the star’s atmosphere. All of this leaves a lot of room for investigation.

We also have to add possible radio frequency interference (RFI) into the mix, something the scientists at Arecibo are examining as observations continue. The possibility that we are dealing with a new category of M-dwarf flare is intriguing and would have obvious ramifications given the high astrobiological interest now being shown in these dim red stars.

Picture of the star field around #Ross128 (near center) that I generated from @AAVSO for @EliBonora pic.twitter.com/RbWBW7EmXl

All of this needs to be weighed as we leave the SETI implications open. The Arecibo post notes that signals from another civilization are “at the bottom of many other better explanations,” as well they should be assuming those explanations pan out. But we should also keep our options open, which is why the news that the Breakthrough Listen initiative has now observed Ross 128 with the Green Bank radio telescope in West Virginia is encouraging.

No evidence of the emissions Arecibo detected has turned up in the Breakthrough Listen data. We’re waiting for follow-up observations from Arecibo, which re-examined the star on the 16th, and Mendez in an update noted that the SETI Institute’s Allen Telescope Array had also begun observations. Seth Shostak tells us that the ATA has thus far collected more than 10 hours of data, observations which may help us determine whether the signal has indeed come from Ross 128 or has another source.

“We need to get all the data from the other partner observatories to put all things together for a conclusion,” writes Mendez. “Probably by the end of this week.”

Or perhaps not, given the difficulty of detecting the faint signal and the uncertainties involved in characterizing it. If you’re intrigued, an Arecibo survey asking for public reactions to the reception is now available.

I also want to point out that Arecibo Observatory is working on a new campaign to observe stars like Ross 128, the idea being to characterize their magnetic environment and radiation. One possible outcome of work like that is to detect perturbations in their emissions that could point to planets — planetary magnetic fields could conceivably affect flare activity. That’s an intriguing way to look for exoplanets, and the list being observed includes Barnard’s Star, Gliese 436, Ross 128, Wolf 359, HD 95735, BD +202465, V* RY Sex, and K2-18.

A final note: Arecibo is now working with the Red Dots campaign in coordination with other observatories to study Barnard’s Star, for which there is some evidence of a super-Earth mass planet. More on these observations can be found in this Arecibo news release.