Testing out new sail applications is part of a European project called RemoveDebris, which focuses on strategies for dealing with the enormous amount of junk that is piling up around the Earth. Run by the Surrey Space Center at the University of Surrey (UK) and the Von Karman Institute of Belgium, the work takes note of the fact that, from flecks of paint to inactive satellites to spent rocket boosters, our planet is orbited by about 7000 tonnes of material. If you want to visualize that amount, it’s the equivalent of 583 London buses, according to this SSC news release.

You may recall that in the film Gravity, a Space Shuttle is destroyed by space debris. But the issue is hardly confined to Hollywood imaginings. Jason Forshaw is Surrey Space Centre project manager on the RemoveDebris team:

“Various orbits around the Earth that are commonly used for satellites and space missions are full of junk, which is a significant danger to our current and future spacecraft. Certain orbits – which are commonly used for imaging the earth, disaster monitoring and weather observation – are quickly filling up with junk, which could jeopardise the important satellites orbiting there. A future big impact between junk in that orbit could result in a real life ‘Gravity-like’ chain reaction of collisions.”

A scary thought, but as you would imagine, my interest for Centauri Dreams is primarily in terms of that interesting sail deployment. Funded by the European Commission, the Surrey effort, called InflateSail, has demonstrated inflatable sail deployment techniques and will be testing deorbiting sail technologies from a small satellite. Launch occurred on June 23, with deployment shortly after the CubeSat carrying the sail achieved orbit.

The sail is designed to demonstrate the effectiveness of a drag sail at causing satellites to lose altitude and burn up in the atmosphere. The satellite uses a cool gas generator to inflate a one-meter long boom. After boom inflation, a motor extends four carbon booms that extract the 10-meter square sail. In future use, such a sail could be carried aboard a satellite and deployed at the end of its life, to ensure that it does not join the ranks of space debris. 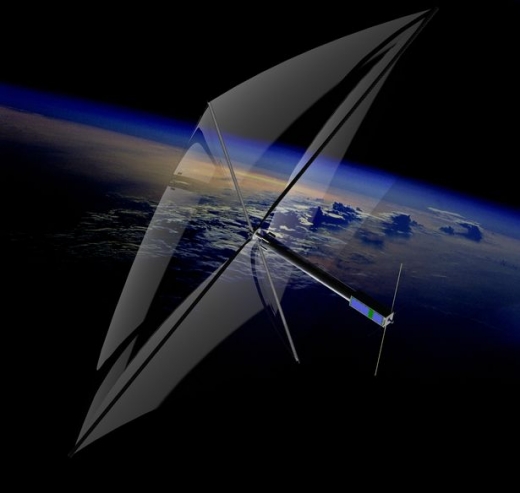 Image: The InflateSail mission has successfully tested both inflatable and ‘deorbit sail’ technologies in space from a small nanosatellite. Credit: University of Surrey.

You may recall that NASA launched a small sail called NanoSail-D2 in 2010 that eventually re-entered the atmosphere after 240 days in orbit. Its deployment from the FASTSAT satellite in which it launched did not occur on time, but the sail later ejected and deployed three days later, a follow-up to an earlier NanoSail-D that was lost during the launch attempt. In addition to testing systems for sail deployment, NanoSail-D2, like InflateSail from the SSC, was designed to explore deorbiting measures that could be applied to space debris.

The Surrey sail is in orbit and returning data to ground controllers. Drag produced by the sail will gradually lower its altitude for re-entry, causing it to burn up in the atmosphere. Craig Underwood, who is in charge of the Surrey Space Center’s environments and instrumentation group, is principal investigator for the mission. Says Underwood:

“We are getting tremendous data from the spacecraft, which have already given new insights into these key deorbiting technologies in the real space environment. InflateSail heralds yet another successful CubeSat mission for the space engineering and academic team at the SSC. It also demonstrates how we can effectively help reduce space junk, and later this year we will launch one of our flagship missions, RemoveDebris – one of the world’s first missions to test capturing of artificial space junk with a net and harpoon.”

Centauri Dreams’ take: The more experience we gain with sail deployment and operations, the better. In this case, we are looking at near-term sail applications to solve a serious problem for spacecraft near the Earth. But remember the success of Japan’s IKAROS mission at going interplanetary and testing sail deployment, navigation and data return. Early in the next decade, if all goes as planned, a new sail from JAXA spanning 50 meters to the side will deploy and head for Jupiter to study its trojan asteroids.

The future of sail technologies seems bright, particularly as we gain experience and begin to explore beamed energy possibilities. The fact that the Surrey Space Center has successfully deployed an inflatable sail from the small CubeSat in which it was contained is an encouraging nod to the continued development of sails for near-Earth use. As we master these technologies, we’ll apply them to missions deep into the Solar System and beyond.