The Voyagers’ continuing interstellar mission reminds us of how little we know about space just outside our own Solar System. We need to learn a great deal more about the interstellar medium before we venture to send fast spacecraft to other stars. And indeed, part of Breakthrough Starshot’s feasibility check re small payloads and sails will be to assess the medium and determine what losses are acceptable for a fleet of such vehicles.

The definitive work on the matter is Bruce Draine’s Physics of the Interstellar and Intergalactic Medium, and thus it’s no surprise that Draine has been involved as a consultant with Starshot. As we saw yesterday, we have only one spacecraft returning data from outside the heliosphere (soon to be joined by Voyager 2), making further precursor missions explicitly designed to study ‘local’ gas and dust conditions a necessity.

Another reminder of the gaps in our knowledge comes from an analysis of WISE data. The Wide-field Infrared Survey Explorer satellite has given us a look at objects perturbed in some fashion within the Oort Cloud and now making occasional forays into nearby space. A distribution of comets and other icy bodies beginning some 300 billion kilometers from the Sun and extending outwards perhaps as far as 200,000 AU, the Oort Cloud’s extent makes it possible that it may extend into similar clouds of icy material around the Alpha Centauri stars. 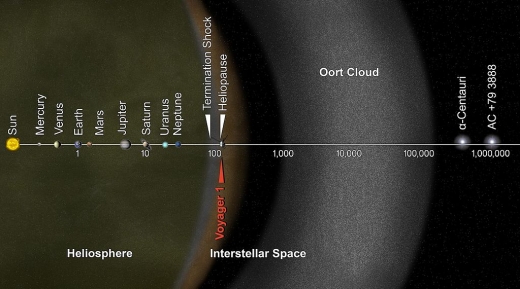 There turns out to be more of such material than we had thought. The outer Oort Cloud is only loosely bound, meaning that gravitational interactions with passing stars or ‘rogue’ planets, not to mention effects from the Milky Way itself, can dislodge comets from their orbits and bring them into the inner system. Such comets may have periods not just in the hundreds but millions of years. The WISE data were gathered during the spacecraft’s primary mission, before its recommissioning as NEOWISE, with the charter of studying near-Earth objects.

Measuring the size of long-period comets is difficult because the cloud of gas and dust around the comet — its coma — makes it difficult to measure the actual cometary nucleus. WISE was able to get around this problem by probing comets in the infrared, subtracting the glow of the coma from the signature of the nucleus. 2010 WISE observations of 95 Jupiter family comets — with periods of 20 years or less — and 56 long-period comets were used in the study.

“The number of comets speaks to the amount of material left over from the solar system’s formation,” said James Bauer, lead author of the study and now a research professor at the University of Maryland, College Park. “We now know that there are more relatively large chunks of ancient material coming from the Oort Cloud than we thought.” 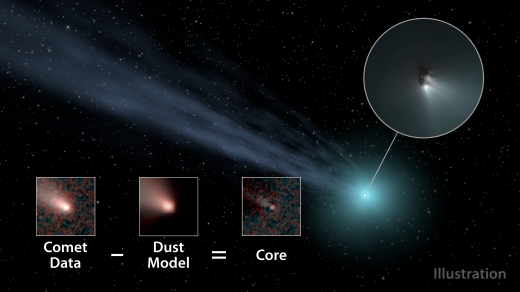 Image: This illustration shows how scientists used data from NASA’s WISE spacecraft to determine the nucleus sizes of comets. They subtracted a model of how dust and gas behave in comets in order to obtain the core size. Credit: NASA/JPL-Caltech.

The results presumably reflect the fact that, coming closer to the Sun on a much more frequent basis, Jupiter-class short-period comets lose volatiles through sublimation, along with surface materials. An observed clustering in the orbits of long-period comets also suggests that many of these could have been part of larger bodies at some point in the past. The findings may have a bearing on our estimates of water delivery to the early Earth.

Co-author Amy Mainzer (JPL), principal investigator of the NEOWISE mission, points out that, traveling much faster than asteroids, long-period comets like these, many of them quite large, have to be factored into our analyses of impact risk. We’re developing an extensive catalog of near-Earth objects, but a long-period comet dislodged from the Oort Cloud, moving faster than any near-Earth asteroid, poses a risk that is badly in need of assessment.

Next post: An Astrobiological Role for Titan’s Complex Chemistry?