An Exoplanet with a Stratosphere

We’re beginning to find stratospheres on planets around other stars. A new study based at NASA Ames has looked closely at WASP-121b, a ‘hot Jupiter’ in its most extreme form. This is a planet about 1.2 times as massive as Jupiter, but with a radius almost twice Jupiter’s. The puffy world orbits its star in a scant 1.3 days (Jupiter, by contrast, circles the Sun every twelve years). As you would imagine, temperatures on WASP-121b are extreme, reaching 2500 degrees Celsius, which is enough to cause some metals to boil.

A stratosphere is simply a layer within an atmosphere where temperature increases with higher altitudes. Exactly how do scientists determine whether a planet fully 900 light years from Earth has such a layer? The answer is in the signature of hot water molecules, observed here by examining how these molecules in WASP-121b’s atmosphere react to specific wavelengths of light. The researchers used spectroscopic data from the Hubble instrument to make the call, knowing that cooler water vapor can block certain wavelengths from warmer layers below.

The brightness of the planet changes, in other words, at different wavelengths of light. When water molecules in the upper atmosphere are warmer than the layers below, as in a stratosphere, the molecules glow in the same infrared wavelengths that would be blocked by cooler air. The Ames team, led by lead author Tom Evans (University of Exeter) found exactly this signature in the Hubble data. Co-author Mark Marley (NASA Ames) describes the significance of the finding: 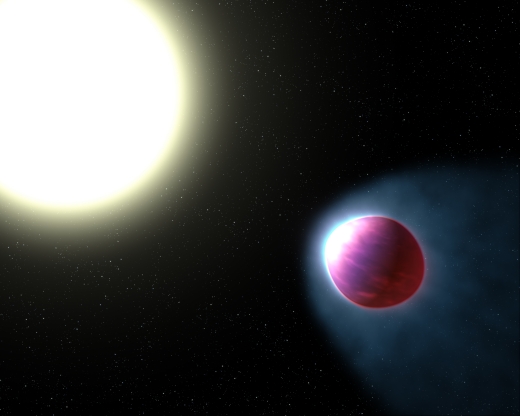 Image: This artist’s concept shows hot Jupiter WASP-121b, which presents the best evidence yet of a stratosphere on an exoplanet. Credit: Engine House VFX, At-Bristol Science Centre, University of Exeter.

Heated to the point that iron exists in gaseous rather than solid form, WASP-121b offers an extreme form of the stratospheres we’ve observed in the Solar System. Earth’s stratosphere gains a heat assist from the ozone that traps the Sun’s ultraviolet radiation. But we also find stratospheres in the outer system. Both Jupiter and Titan have stratospheres, with methane the likely source of heating. The change in temperatures in Solar System stratospheres is generally small, in the neighborhood of 55 degrees Celsius. On WASP-121b, that figure is 560° Celsius.

Researchers have found evidence for stratospheres on some exoplanets, but the WASP-121b work is the first time that water molecules have provided such clear-cut evidence. The authors point to vanadium oxide and titanium oxide gases as possible heat sources here, playing the role that ozone does in Earth’s stratosphere as they absorb starlight at visible wavelengths in the same way that ozone does in the infrared. We’ll learn more about this as the observing effort, which will study 20 different exoplanets over 800 hours of Hubble time, continues.

“This new research is the smoking gun evidence scientists have been searching for when studying hot exoplanets. We have discovered this hot Jupiter has a stratosphere, a common feature seen in most of our solar system planets.” says co-author David Sing (University of Exeter). “It’s a truly exciting find as we’re seeing dramatic differences planet-to-planet which is giving valuable clues in figuring out how planets behave under different conditions, and we’re only just scratching the surface of all the new Hubble data.”

Further Hubble data, of course, will eventually give way to follow-up by the James Webb Space Telescope, delving deeper into the question of stratosphere behavior at different longitudes on the planet. It’s likely that, given its extreme conditions (any closer to its star and WASP-121b could be torn apart), this planet will become a benchmark for atmospheric models. It’s also certainly a reminder of how we’re learning not only to detect exoplanet atmospheres but probe them, an effort we hope to continue on smaller, potentially habitable worlds soon.

The paper is Evans et al., “An ultrahot gas-giant exoplanet with a stratosphere,” Nature 548 (3 August 3 2017). Abstract available. For related work, see Haynes, “Spectroscopic Evidence for a Temperature Inversion in the Dayside Atmosphere of the Hot Jupiter WASP-33b,” Astrophysical Journal Vol. 806, No. 2 (12 June 2015). Abstract.