I’m going to miss the Cassini mission as much as anyone, but I have to say it’s fascinating to watch how mission controllers are wringing good science out of every last moment of the spacecraft’s life. We’re now in the Grand Finale phase of the mission, in which Cassini has moved between the planet and its rings in a series of weekly dives. Now we’re about to push into a new series of close passes, actually moving through Saturn’s upper atmosphere.

Notice the language that Linda Spilker, Cassini project scientist at the Jet Propulsion Laboratory, uses to describe what’s next:

“As it makes these five dips into Saturn, followed by its final plunge, Cassini will become the first Saturn atmospheric probe. It’s long been a goal in planetary exploration to send a dedicated probe into the atmosphere of Saturn, and we’re laying the groundwork for future exploration with this first foray.” 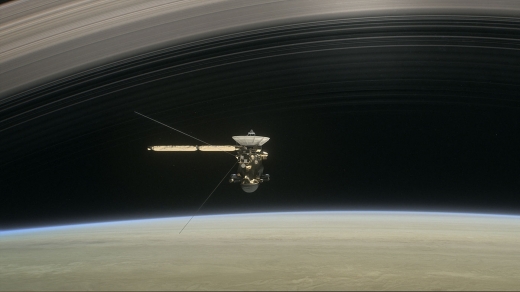 Image: This artist’s rendering shows Cassini as the spacecraft makes one of its final five dives through Saturn’s upper atmosphere in August and September 2017. Credit: NASA/JPL-Caltech.

Cassini as atmospheric probe? The mind boggles, but this will not be the first time the spacecraft has had to deal with an atmosphere. Those close flybys of Titan that produced so many spectacular findings about its atmosphere and surface required Cassini to use its rocket thrusters to maintain stability. You could consider the Titan flybys advanced preparation for this culminating act, and one in which the thrusters are being given wide margins for safety.

Consider the first atmospheric pass at Saturn, which will occur at 0022 EDT (0422 UTC) on Monday, August 14. The point of closest approach during these passes is to be between 1630 and 1710 kilometers above Saturn’s cloud tops. The built in margin is this: The thrusters are expected to operate somewhere between 10 and 60 percent of their capacity, the exact figure being determined by how stable the spacecraft remains through the procedure.

Anything beyond 60 percent means it proved harder to maintain stability than anticipated, a problem that would be corrected by a so-called ‘pop-up maneuver’ that will use the thrusters to increase the altitude of the later closest approaches by about 200 kilometers. Conversely, if no such maneuver is required, the orbit could be lowered as much as 200 kilometers on the last two orbits. In any case, a final ‘pop-down maneuver’ will occur on September 11, bending Cassini’s orbit (with the help of Titan) for the final plunge into the planet on September 15. 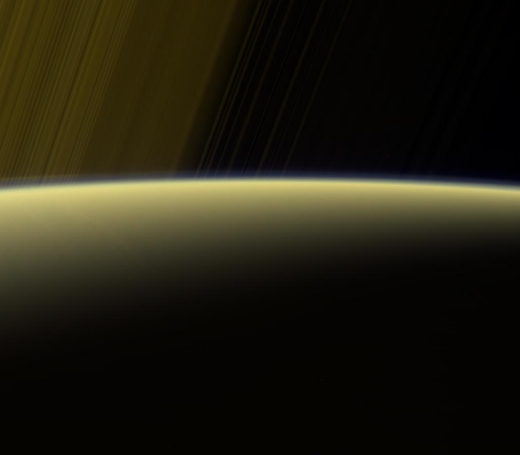 Image: This view from Cassini shows the narrow band of Saturn’s atmosphere, which Cassini will dive through five times before making its final plunge into the planet on Sept. 15. Credit: NASA/JPL-Caltech.

For now, we’ll be collecting data from Cassini’s ion and neutral mass spectrometer (INMS) to examine Saturn’s atmosphere, with other instruments producing high-resolution data on the planet’s auroras, atmospheric conditions and the vortices at the planet’s poles. Radar examination through the atmosphere should render features as small as 25 kilometers wide, about 100 times smaller than we’ve been able to obtain before the Grand Finale phase.

Cassini’s end on September 15 should be abrupt. With all seven of its science instruments reporting, the spacecraft will quickly reach an atmospheric density about twice what it should encounter during these final five passes. At that point, with the thrusters no longer able to maintain stability, Cassini’s antenna will lose its lock on Earth and we will lose contact.

Thinking about all that Cassini has given us, that’s a hard end to consider. But the spacecraft will be working until the last, augmenting the vast data flow we’ve received from Saturn. The discoveries we extract from Cassini’s mission will continue long after the probe is gone.