Knowing that he was busy in Australia, I hadn’t thought that Alan Stern would get off a new report on New Horizons quite this fast (he wrote it over the Pacific on the flight back). But there’s enough here that I want to supplement this week’s earlier post about the three occultations of 2014 MU69, the distant Kuiper Belt Object toward which the spacecraft now moves at roughly a million kilometers a day. I’m also taken with an image in Stern’s latest, seen below. What we’re looking at is the spacecraft as it approaches what we now think may be a binary object, with the dense starfield in Sagittarius stretching out behind. Nice work by artist Carlos Hernandez. 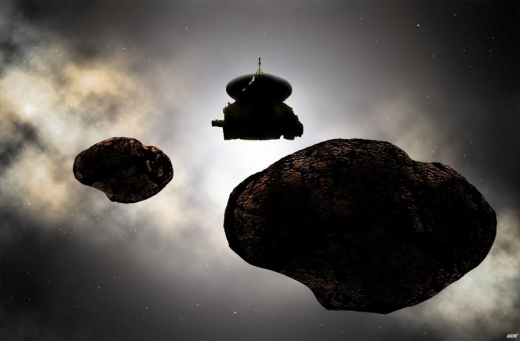 The three occultations observed in June and July were examined in particular for evidence of debris, rings or other hazards that could cripple the spacecraft during the close approach. The encounter speed will be in the neighborhood of 14.2 kilometers per second, making even tiny pebbles a potential mission-ender. The work, involving two dozen telescopes and including data from the airborne NASA SOFIA observatory, produced no show-stoppers by way of debris but did give us the information that MU69 may be not one but two objects in close proximity.

All this has interesting implications, as we discussed on Tuesday. Here’s how Stern described the findings of the occultation effort, which was led by science team co-investigator Marc Buie: 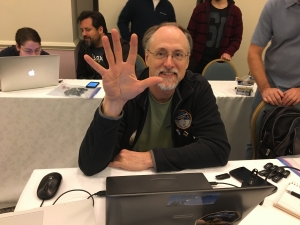 The result Buie and Co. found was surprising and spectacular and scientifically seductive: MU69 appears to be either a binary orbiting pair or a contact (stuck together) pair of nearly like-sized bodies with diameters near 20 and 18 kilometers… This means we are very likely going to a primordial binary in the Kuiper Belt, a 4-billion-year-old relic of solar system formation and an exotic building block of the small planets of the Kuiper Belt like Pluto, Ixion, Makemake, Sedna and Eris.

We also learn several new things from Stern’s report, written on his way back from the Deep Space Network (DSN) communications station outside Canberra in New South Wales. Astronomer Susan Benecchi (Planetary Science Institute) led studies with the Hubble Space Telescope this summer to examine MU69 from the standpoint of variations in brightness as it rotates on its axis, which could be an early clue to its shape and features.

The brightness variation turns out to be less than 20 percent, which implies that the object is either spherical in shape, or else is being observed with its pole pointed toward Earth. Perhaps both are true, but the finding adds to the suspense of the MU69 encounter as we try to reconcile a close binary with the Hubble brightness results. Have a look at the image below. 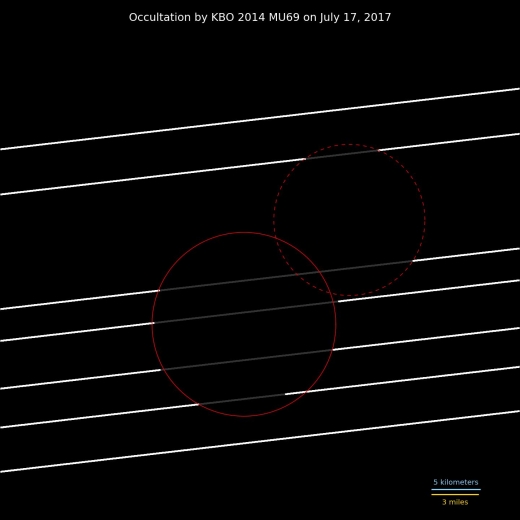 The flyby, scheduled for January 1, 2019, has now been moved forward by about an hour, an adjustment that, according to Stern, optimizes the viewing angles from the Canberra and Goldstone (CA) stations of the Deep Space Network. The team hopes to maximize the odds for measuring MU69’s mass by exquisitely precise tracking of New Horizons during the flyby. There will also be a DSN attempt to illuminate the KBO to measure its radar reflectivity.

Currently in a five-month hibernation period, New Horizons will ‘awaken’ on September 11, at which point instrument tests and observations, along with routine spacecraft maintenance, can continue. An improved suite of fault protection software, the last such upload, will be sent in early October. Stern explains the game plan going forward:

This fall, after New Horizons emerges from hibernation, we’ll craft the MU69 flyby observation plan in exquisite detail. We’ll also make more science observations of distant KBOs, and we’ll be continuously measuring the Kuiper Belt’s radiation, dust and gas environment. Near the end of this year, on Dec. 9, we’ll fire our engines to trim our course to and optimize the arrival time at MU69 as I described earlier. Then New Horizons will enter hibernation one last time, before the MU69 flyby begins late next summer. New exploration awaits us, at the very frontier of our solar system – late in 2018 and early in 2019, both of which are almost around the corner!

And let me throw in congratulations to Marc Buie and his colleagues. Remember that we are dealing with an object that is seven billion kilometers out, and no more than 30 kilometers in diameter. Imagine the faintness of the shadow thrown by these distant eclipses and consider what an extraordinary effort went into retrieving the data. Buie has truly pushed occultation science to a new level.