TRAPPIST-1: The Importance of Age

If life can arise around red dwarf stars, you would think TRAPPIST-1 would be the place to look. Home to seven planets, this ultracool M8V dwarf star about 40 light years away in Aquarius has been around for a long time. The age range in a new study on the matter goes from 5.4 billion years up to almost ten billion years. And we have more than one habitable zone planet to look at.

Adam Burgasser (UC-San Diego) and Eric Mamajek (JPL) are behind the age calculations, which appear in a paper that has been accepted at The Astrophysical Journal. We have no idea how long it takes life to emerge, having only one example to work with, but it’s encouraging that we find evidence for it very early in Earth’s history, dating back some 3.8 billion years. But we also have much to learn about habitability around red dwarfs in general. 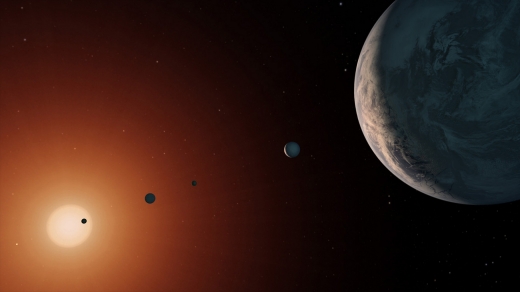 Image: This illustration shows what the TRAPPIST-1 system might look like from a vantage point near planet TRAPPIST-1f (at right). Credit: NASA/JPL-Caltech. [PG note to JPL: Please append artists’ names to such images! I want to credit the artist but have no idea who it is].

The good thing about being a somewhat older red dwarf is that flare activity should have slowed over time, a fact that the authors confirm. This doesn’t make it necessarily benign. In fact, as the paper points out, “…despite TRAPPIST-1’s modest emission as compared to other late-M dwarfs, the radiation and particle environment is still extreme as compared to the Earth.”

And because the habitable zone planets (e, f and g) around TRAPPIST-1 orbit as close to it as they do — all seven planets orbit within Mercury’s orbit around the Sun — they have long been exposed to radiation that could have destroyed their atmospheres and caused their oceans to evaporate. The orbital periods here range from 1.5 to 19 days, with orbital semi-major axes of 0.011-0.062 AU. Tight indeed!

The paper notes that based on current estimates, the high energy emissions of TRAPPIST-1 are probably enough to have evaporated an Earth’s ocean of water mass from each of the planets save the outer two over the lifetime of the stellar system. Another ominous note: The process of stripping an atmosphere can go into high gear when the magnetic field lines of a star interact with those of a planet, funneling stellar wind particles directly to the planet’s surface.

But we don’t know enough about these planets to make the call, and there are other factors that come into play, including the possibility of thick atmospheres. From the preprint:

… current estimates of the planets’ densities are generally below Earth’s average density (Gillon et al. 2017; Wang et al. 2017), suggesting volatile-rich worlds that may have ample reservoirs; while ocean evaporation and hydrogen loss could result in an oxygen- and ozone-rich atmosphere that could shield the surface from high UV fluxes (Luger & Barnes 2015; O’Malley James & Kaltenegger 2017). Transit spectroscopy measurements of the atmospheres of these planets are currently insufficient to detect the signatures of all but the lightest elements (de Wit et al. 2016), but the James Webb Space Telescope should have the sensitivity to detect Earth-like atmospheres around these planets, if they exist (Barstow & Irwin 2016).

So the key question is, will we find atmospheres on these planets when we have the technology in place to spot them? TRAPPIST-1 is close enough to the Earth that space-based assets should be able to give us an answer soon. You can see how significant the James Webb Space Telescope is as we look toward the future of characterizing Earth-mass planet atmospheres. A thick atmosphere can shield a planetary surface as well as redistributing heat from the dayside to the dark on these presumably tidally locked worlds. Too much of a good thing, of course, can lead to the kind of greenhouse effects that have so ravaged our neighboring world Venus.

Burgasser and Mamajek’s study is an important one, because age is critical for understanding the evolution of this star’s planetary system. The paper uses a variety of tools, ranging from average density to flare activity, lithium absorption, metallicity, kinematics, rotation and magnetic activity to make the call on age. Also a factor: How fast the star is moving in the galaxy.

The conclusion that TRAPPIST-1 is a far older star than previously thought has implications for the stability of the planetary system:

… N-body simulations presented in Gillon et al. (2017) showed the planetary system to be consistently unstable on timescales < 0.5 Myr, with only an 8% chance of surviving 1 Gyr. This is refuted by the much older age we infer for the TRAPPIST-1 star. However, recent simulations show that the resonant configuration of these planets is in fact highly stable through disk migration on timescales of 50 Myr (1010 orbits), with or without eccentricity dampening. That this system appears to have persisted for over 5 Gyr, despite dynamical interactions that are readily detectable through transit timing variations (Gillon et al. 2017; Wang et al. 2017), suggests that the resonant configuration is indeed inherently stable.

Addendum: I was unclear about the issue of disk migration and stability, a matter about which Dr. Burgasser was kind enough to comment in an email. He refers to a 2017 paper called “Convergent Migration Renders TRAPPIST-1 Long-lived” by Daniel Tamayo and colleagues (abstract here), and goes on to say this:

In brief, their simulations show that the T-1 system must have migrated in slowly in order to end up in its compact system, and in effect uses the disk to damp out any eccentricities that arise between the moving planets. Such systems are not “immune” to instabilities, but the authors of this paper were able to show for a range of initial conditions a planetary configuration that looks similar to T-1 and lasts for a large number of orbits (10 billion!).

The current work has been done with data from the Spitzer space telescope, the continued use of which should help to tighten up estimates of the TRAPPIST-1 planet densities, which is also a factor as we try to determine their compositions. Further work with Hubble and, of course, with JWST should help us learn whether there are indeed atmospheres in this planetary system.

The paper is Burgasser & Mamajek, “On the Age of the TRAPPIST-1 System,” accepted at The Astrophysical Journal (preprint).

Next post: Tuning Up RV: A Test Case at Tau Ceti