Tuning Up RV: A Test Case at Tau Ceti

The new work on Tau Ceti, which analyzes radial velocity data showing four planets there, looks to be a step forward in this workhouse method for planetary detection. With radial velocity, we’re analyzing tiny variations in the movement of a star as it is affected by the planets around it. These are tiny signals, and the new Tau Ceti paper discusses working with variations as low as 30 centimeters per second. It’s a good number, but we’ll want better — to detect a true Earth analog around a Sun-like star, we need to get this number into the 10 cm/s range. 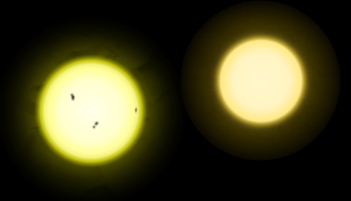 The planets detected in this work all come in at less than four Earth masses, and two of them are getting attention because they are located near the inner and outer edges of the habitable zone respectively. Tau Ceti has always drawn our attention, being relatively close (12 light years) and a solitary G-class Sun-like star. No wonder it and Epsilon Eridani were the two targets Frank Drake chose for Project Ozma when he launched observational SETI in 1960.

The idea that there are planets around Tau Ceti is not new, but the current study, led by Fabo Feng (University of Hertfordshire, UK) re-examines the star and actually eliminates two of the candidate planets identified four years ago. Radial velocity depends on picking out the faint signature of planets against ‘noise’ such as activity on the surface of the star, the rotation of the star, and uneven sampling times from observations. This is why validating some RV planet candidates can be tricky. Feng and team, however, have applied a new method.

This is the same team that did the 2013 paper on Tau Ceti, using the nearby star as a test case for its methods. The idea was to examine how activity on Tau Ceti itself differed when observed in a range of wavelengths. The thinking here is that the ‘jitter’ in variations of the radial velocity signal is dependent on wavelength, which needs to be accounted for in the analysis.

To do this, the authors introduce what they call “differential RVs.” The radial velocity signals of planets do not depend on wavelength, so differential RVs are those that contain only the noise that needs to be screened. Working with 9000 measurements of the star from the HARPS spectroscope, including new measurements, the team found four strong planet candidates.

The signals are consistent with orbits of 20.0, 49.3, 160 and 642 days. This is an interesting mix given the earlier work, as it identifies two new RV signals (20 and 49.3 days), while tightening up the precision on the previously identified candidates at 160 and 600 days, and at the same time ruling out two of the candidates identified in 2013. “But no matter how we look at the star,” says Mikko Tuomi (University of Hertfordshire), “there seems to be at least four rocky planets orbiting it.”

We’re learning something crucial here about how radial velocity methods work. Remember that we thought for a time that we had identified a planet around Alpha Centauri B, a detection that was later acknowledged to be a mistake in the analysis. When we’re dealing with planets of roughly Earth’s size, the radial velocity signals we can expect even from nearby stars are well below 1 meter per second. The complexity of the problem in relation to Tau Ceti is evident:

The planetary candidates we have identified partially overlap with the ones found by MT13 [the authors’ 2013 paper on Tau Ceti RV analysis]. We find two new planetary candidates with periods around 20 and 49 d, but fail to confirm the signals around 14 and 35 d. Although there is evidence for the existence of the signal at around 92 d, we cannot confirm it as a Keplerian candidate because it cannot be consistently identified in all data sets and solutions. The signal around 14 d becomes weak when we subtract the 20 d signal from the data. But the opposite is not true, suggesting a non-Keplerian origin of the 14 d signal. Nevertheless, the 14 d signal does exist in some Keplerian and circular solutions after accounting for the 20 d signal. In addition, by evenly dividing the data into 3 chunks, we find that the 14 d is significant in the first chunk while the 20 d is significant in the second and third chunks…

And so on. The lesson is clear enough: We have to be extremely careful when interpreting signals below 1 meter per second, the range in which we’ll need to identify Earth-class planets.

But the value of radial velocity is unquestioned. Unlike the transit technique, we don’t have to rely on a fortuitous line-up between a distant planetary system and the Earth — we can therefore extend it to all bright stars of interest. Feng and colleagues think we will be able to use new high precision spectrometers along with these emerging statistical and noise models to find a true Earth analog in the coming decade. Thus this work on Tau Ceti, modeling wavelength-dependent noise, becomes a test case of a new noise model framework that can help us filter background noise out of RV observations. 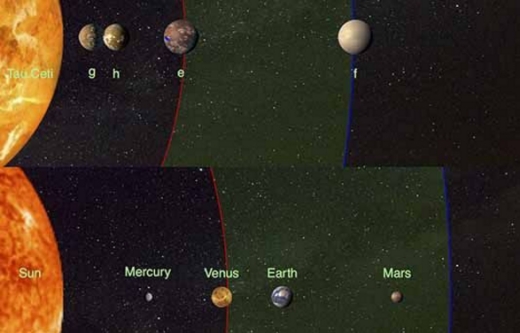 Image: The four planet candidates at Tau Ceti in comparison with our Solar System. Credit: University of Hertfordshire.

And while two of these planets (e and f) have been cited as being close to the boundaries of the habitable zone, the massive debris disk around Tau Ceti is going to be a factor in habitability in this system, leading to presumed cometary bombardment. We’ll want to learn more about the inner boundaries of the debris disk, and also whether the disk and planetary system orbit in the same plane, which would have a strong effect on the masses of these planet candidates. A co-planar disk brings the mass estimates of these four planets up sharply.