Is the Term ‘Habitable Zone’ Viable?

I’m not much for changing the meaning of words. True, languages always change, some at a faster clip than others (contrast Elizabethan English with today’s, though modern Icelandic is structurally very similar to the Old Norse of the sagas). But I love words and prefer to let linguistic variety evolve rather than be decreed. Even so, I get what Elizabeth Tasker is doing when she makes the case for exoplanet hunters to do away with the term ‘habitable zone.’

In a comment to Nature Astronomy, Tasker (JAXA) and quite a few colleagues point out just how misleading ‘habitable zone’ can be, given that when we find a new exoplanet, we usually only know the size of the planet (perhaps through radius, as in a transit study, or through minimum mass for radial velocity), and the amount of radiation the planet receives from its star. From such facts we can infer whether we’re dealing with a gas giant or a rocky world.

This is hardly enough on which to base a claim of habitability, but it gets worse. Among those planets where both radius and mass can be measured, we can work out an average density. Planets 40 percent larger than Earth are probably gaseous, but the cut-off is not definitive. And as to radiation from the star, this gets thorny indeed. Atmospheres come into play — consider that the equilibrium temperature on Earth is -18 degrees Celsius, at which temperature water is a solid. It takes our atmosphere to produce the 15 degree Celsius global average. 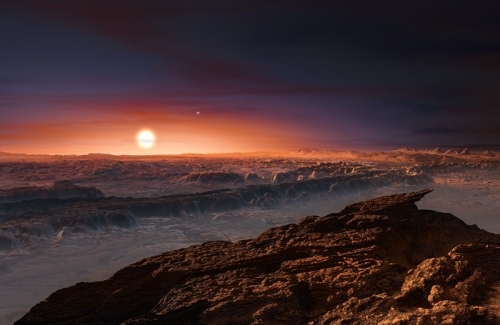 Image: An artist’s impression of Proxima Centauri b. But how much do we really know about the surface of this world? Credit: ESO/M. Kornmesser.

Equilibrium temperature is an interesting figure. It represents a surface temperature assuming a planet has no atmosphere. As Tasker and crew point out:

The heat-trapping properties of an atmosphere are highly variable, however, and depend on its thickness and gas composition. Our atmosphere raises Earth’s temperature to from below freezing to a life-friendly level. On Venus, by contrast, where the equilibrium temperature would be a comfortable 80 degrees F (about 27 degrees C), its thick atmosphere, made mostly of the greenhouse gas carbon dioxide, boosts the actual temperature to a hellish 860 degrees F (460 °degrees C), turning this Earth-size planet into an inferno hot enough to melt lead.

Arguing that ‘a quantitative measure of habitability is impossible,’ Tasker says in this Scientific American essay based on the Nature Astronomy piece that temperature and habitability don’t always go together. We can thank factors like our planet’s magnetic field for protection against the kind of solar flares that could impact the development of life. We can also thank plate tectonics, which sets up a carbon-silicate cycle, for its impact on our atmosphere. The list goes on.

Now if all this were simply a matter of lowering the expectations of headline writers, the case would be strong enough. Whenever I see a bold headline proclaiming the discovery of a ‘habitable second Earth’ or some such, I wonder how jaded the public will eventually become, especially since many such articles don’t explain how tenuous a call this really is. We want public participation in the exoplanet hunt, but we should also want the public to receive solid information. Trying to get news outlets to tone down the rhetoric, though, may not be possible.

But think ahead to the coming decade, in which we’re going to have at our disposal assets that may show us biosignatures (or not) in the atmospheres — if they are there — of planets of great interest, such as the seven worlds around TRAPPIST-1, or perhaps those interesting four planets we looked at yesterday around Tau Ceti. The reason why the astronomical community has worked so hard on the metrics for choosing which planets to look at is that these resources are going to be scarce, and we have to optimize our target list.

Thus we talk about ‘habitable zones’ where planets can have liquid water on their surface, and use such tools as the Earth Similarity Index, which lays out orbital parameters for smaller planets in a habitable zone. But again, the parameters in play come back to the two we’ve already discussed, the size of a planet and the radiation it receives from its star. A planet can be like the Earth in these two factors and still be a long way from habitability. Tasker again:

Over-interpreting these selection tools to claim they measure habitability is a dangerous game. It is absurd to suggest we can assess something as complex as life-supporting conditions based on just two properties, neither of which directly probe the relevant environment. It is equivalent to judging someone’s personality based on height and the distance between the eyes. The proliferation of such statements both in the popular media and even scientific literature risks planetary scientists being taken less seriously.

What to do? The authors of the Nature Astronomy paper want to remove the term ‘habitable zone’ altogether from the evaluation metrics astronomers use (Tasker suggests ‘temperate zone’ instead). Presumably astronomers would then stop saying they had found a planet in the ‘habitable zone,’ and the urge for misleading headlines would vanish.

I fully understand the concern these scientists are expressing and think all of us who write about these matters have an obligation to make no exaggerated claims. But as I said at the top, the pace of linguistic change over time is slow, and in this case, where hopes for finding a genuine Earth 2.0 are high, it will take more than a linguistic fiat to calm down fervid language.

By all means, go to ‘temperate zone’ within the scientific community if necessary — it makes no claims about ‘habitability’ – but I suspect our problems with foolish headlines are going to remain a part of the public experience. It takes patience to keep explaining the limitations of exoplanet science, and telling that story accurately isn’t always the way to maximize an audience. But fatigue with exaggerated headlines coupled with persistent education on these matters may eventually right the balance.

And from the standpoint of Internet commentaries, let me point out that Andrew Le Page, on his Drew ex Machina site, has proven the gold standard at analyzing each new claim. His ‘habitable planet reality checks’ are long on analysis and utterly devoid of hype. Slow and persistent, that’s the way to proceed, and at each step of the process, Drew gets it right.