Whether or not life can emerge on the planets of red dwarf stars remains an unknown, though upcoming technologies should help us learn more through the study of planetary atmospheres. Tidal locking always comes up in such discussions, an issue I always thought to be fairly recent, but now I learn that it has quite a pedigree. In a new paper from Rory Barnes, I learn that astronomers in the late 19th Century had concluded (erroneously) that Venus was tidally locked, and there followed a debate about the impact of synchronous rotation on surface conditions.

As witness astronomer N. W. Mumford, who in 1909 questioned whether tidal friction wouldn’t reduce half of Venus to a desert and annihilate all life there. Or E. V. Heward, who speculated that life could emerge on Venus despite tidal lock, and wrote in a 1903 issue of MacMillan’s Magazine:

…that between the two separate regions of perpetual night and day there must lie a wide zone of subdued rose-flushed twilight, where the climatic conditions may be well suited to the existence of a race of intelligent beings.

In terms of exoplanets, as Barnes (University of Washington) points out, Stephen Dole was writing about tidal interactions between exoplanets and their host stars in his book Habitable Planets for Man as early as 1964. It was his view, based upon his own calculations, that all potentially habitable planets orbiting stars smaller than 72% of the Sun’s mass would be in synchronous rotation, circling the star just as the Moon does our Earth. 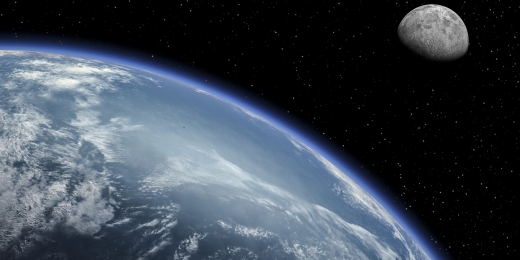 Image: Tidally locked bodies such as the Earth and Moon are in synchronous rotation, each taking as long to rotate around its own axis as it does to revolve around its host star or gravitational partner. New research from UW astronomer Rory Barnes indicates that many exoplanets to be found by coming high-powered telescopes also will probably be tidally locked — with one side permanently facing their host star, as one side of the Moon forever faces the Earth. Credit: NASA.

That would make tidal lock ubiquitous, given the high percentage of stars that are red dwarfs. The work since, beginning with James Kasting in the early 1990s and carrying through until today, has looked at how planets come into synchronous rotation, and just how this situation would affect planetary conditions. We’ve seen a shift from pessimism — such planets could not be habitable — to relative optimism, as new climate models emerged and were adjusted. Barnes’ paper gives all the particulars in a rather fascinating overview of the scholarship.

A brief look through the archives here will show that Barnes’ name comes up frequently and often on matters of tidal effects, giving him an expertise that draws my attention whenever he publishes something new on the matter. The latest paper takes a systematic look at tidal locking to arrive at the conclusion that many exoplanets — and not just those orbiting close to red dwarf stars — will be found to be tidally locked. For it turns out that earlier models used a rapidly rotating early Earth to delve into how a similar exoplanet might become tidally locked.

What Barnes did was to consider the possibility of different initial rotation periods, both slower and faster, examining conditions on planets of different sizes, including those in eccentric orbits. Widening the parameter space suggested that more exoplanets than we once thought could be tidally locked. If Earth had formed with no Moon and its initial rotation period was four days, Barnes’ calculations show one model in which it is tidally locked to the Sun by this point in its evolution. Tidal locking, then, may be a major factor in our analysis of planetary habitability.

Let me quote from the paper:

As astronomers develop technologies to directly image potentially habitable planets orbiting FGK dwarfs (e.g. Dalcanton et al. 2015), they must be prepared for the possibility that planets orbiting any of them may be tidally locked. Such a rotation state can change planetary climate, and by extension the reflected spectra. 3D models of synchronously rotating habitable planets should be applied to planets orbiting K and G dwarfs in addition to Ms. While not explicitly considered here, habitable worlds orbiting brown dwarfs and white dwarfs are even more likely to be synchronous rotators, but their potential habitability is further complicated by the luminosity evolution of the central body (Barnes and Heller 2013).

Thus we extend the quantitative assessment of tidal lock and its effects on habitability to G- and K-class stars as well as M-dwarfs. As the paper notes, “…a systematic survey of the rotational evolution of potentially habitable exoplanets using classic equilibrium tide theories has not been undertaken.”

And it has implications. We are setting about putting assets like the Transiting Exoplanet Survey Satellite (TESS), the James Webb Space Telescope (JWST) and Planetary Transits and Oscillations of stars (PLATO) into space. At the same time, we are working on Earth-based telescopes with apertures in the tens of meters. Our first targets for atmospheric characterization are going to be planets orbiting close to their host star, in the ‘habitable zone’ (or as we said yesterday, ‘temperate zone’) of the host.

The role of tidal locking is thus a crucial factor. Proxima Centauri b is most likely tidally locked, and the worlds around the highly interesting TRAPPIST-1 most likely are as well. We should learn a great deal by studying planetary rotation rates for any temperate exoplanets we find, which should give us clues as to their tidal evolution. Indeed, Barnes simulates the planets the TESS mission will examine and finds that the vast majority of these become tidally locked within a billion years, while about half the isolated (i.e., with no planetary companions) and potentially habitable Kepler candidates could be locked, assuming tidal properties like Earth’s.

A UW news release quotes Barnes on the significance of the findings:

“These results suggest that the process of tidal locking is a major factor in the evolution of most of the potentially habitable exoplanets to be discovered in the near future… I think the biggest implication going forward is that as we search for life on any exoplanets we need to know if a planet is tidally locked or not.”