The Future of Eclipse Science

Talk about transit depth! Those of you in the path of totality are fortunate indeed as we see just how deep a light curve can get. I’ve never experienced totality and won’t this time, but we’ll get plenty of good science out of this event and a spectacular 160 seconds for those in the path.

As the Sun’s corona is revealed, think about the solar wind — the stream of charged particles flowing from the corona out to the heliosphere — and how we might one day use similar stellar winds to brake the onrush of an interstellar probe with a magsail as it nears destination.

160 seconds of totality is a fleeting but, so I’m told, haunting experience. For scientists, though, we’d like a good bit more. Thus it’s welcome news that the European Space Agency is working on Proba-3, a duo of small satellites designed to interact with each other to block the solar disk over and over again. The camera satellite and disk satellite engage in precision flying, creating artificial eclipses of six hours each time the two craft make one 19.6 hour orbit.

You would think that using a coronagraph to block out the direct light of the Sun would be sufficient, and such techniques are in use both on the ground and in space — the Solar and Heliospheric Observatory (SOHO) has been working with a coronagraph since 1996. But inserting a disk into the instrument to block out sunlight has its limitations. Andrei Zhukov (Royal Observatory of Belgium) is principal investigator for Proba-3’s coronagraph.

“The inner extent of the view afforded by standard coronagraphs is limited by stray light. Stray light is a sort of light pollution inside an instrument. In coronagraphs it is a kind of bending of the sunlight around the blocking disc. This problem can be minimised by extending the coronagraph length, the distance between the camera and the disc, as far as possible – but there are practical limits to coronagraph size. Instead, Proba-3’s coronagraph uses two craft: a camera satellite and a disc satellite. They fly together so precisely that they operate like a single coronagraph, 150 m long.” 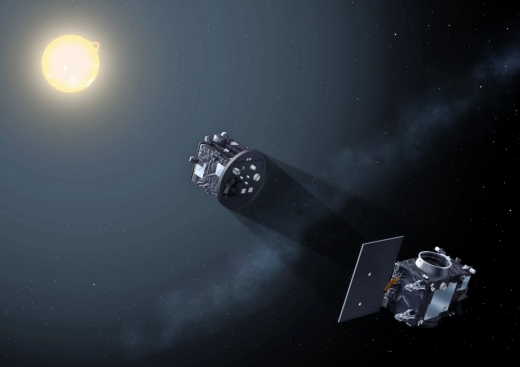 Does this kind of precision flying remind you of anything? The use of an occulter craft flying in formation with a second satellite brought the ‘starshade’ concept to mind when I first encountered it. The 150-meter distance between the two Proba-3 craft is much smaller, of course, as 50,000 kilometers separate starshade and telescope in some concepts.

But the idea is similar — to find a way of blocking out the light of a star so as to reveal nearby space. A starshade would give us the opportunity to actually see exoplanets around nearby stars, light which we can then analyze to understand the composition of their atmospheres. In both concepts, the key is precise positioning and maintenance of the geometry through sensors and software. Missions like Proba-3 thus become not only useful scientific probes but likewise early tests of the kind of hardware we will one day use for close-up views of exoplanets. 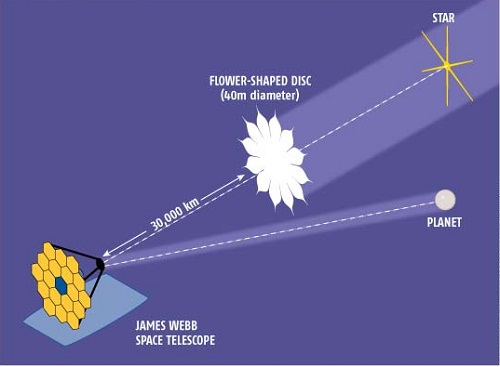 Image: A starshade blocks out light from the parent star, allowing the exoplanet under scrutiny to be revealed. Credit: University of Colorado/Northrup Grumman.

For more on starshades, see Ashley Baldwin’s WFIRST: The Starshade Option, which looks at how we might use the technology with NASA’s Wide-Field Infrared Survey Telescope. Ponder this: The superb coronagraph that will fly aboard WFIRST will be a thousand times more powerful than anything now in operation, according to an essay by JPL’s Jason Rhodes.

But WFIRST with a starshade could reach contrast ratios 10,000 times greater still. Let me quote Rhodes on the matter:

The Starshade would have to be large, about 25–40 m across for a telescope the size of WFIRST, and even larger for a bigger space telescope that could follow WFIRST, and would fly 30,000-50,000 km away from the telescope. Building a structure that large and doing the precision flying needed to align the telescope and Starshade are no small tasks, but some of our best minds are on it. The peculiar ‘flower with petals’ shape of the Starshade is to deal with the diffraction of light. A circular Starshade would cause some of the star’s light to be bent (via diffraction) directly into the telescope. However, the petals are designed to diffract the light away from the telescope, allowing us to reach that magic 10 billion to 1 contrast ratio.

The artificial eclipses made possible through a starshade are very much on the mind of the astronomical community as the idea matures. So as you enjoy today’s eclipse, consider how critical ‘eclipse science’ will become as we analyze the atmospheres of distant worlds.