Looking at recent headlines about ‘diamond rain’ on Neptune provoked a few thoughts about headline writers, though the image is certainly striking, but then I recalled that Carl Sagan used to enjoy pulling out the stops with language as much as anyone. Listen, for example, to the beginning of his 1973 title The Cosmic Connection: 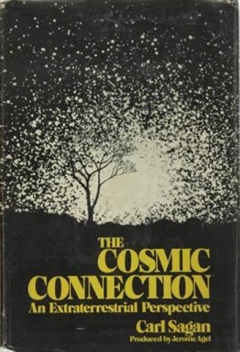 There is a place with four suns in the sky — red, white, blue and yellow; two of them are so close together that they touch, and star-stuff flows between them.

I know of a world with a million moons.

I know of a sun the size of the Earth – and made of diamond.

There are atomic nuclei a mile across that rotate thirty times a second.

There are tiny grains between the stars, with the size and atomic composition of bacteria.

There are turbulent plasmas writhing with X- and gamma rays and mighty stellar explosions.

There are, perhaps, places outside our universe.

And so on. The Cosmic Connection was long on language and imagination, and in its day, ideal for bringing the findings of astrophysics to the attention of the general public. Back in 1973, when I wasn’t poring over medieval texts, I kept the book nearby and re-read various chapters, enjoying Sagan’s effusive enthusiasm. I can see him adding a line or two about the latest findings on the interior of ice giants like Neptune and Uranus, with his own poetic twist.

And diamonds raining down from a high-pressure ‘sky’ deep in Neptune’s atmosphere to the dark core beneath certainly create a striking image. They’re suggested by a new paper looking at the chemical processes going on inside such worlds, which has demonstrated a way of creating what the researchers call ‘nano-diamonds,’ carbon atoms compacted into useful objects we may one day use in everything from medical procedures to industrial cutting needs. Nano-diamonds are likely paralleled by much larger diamonds in planetary interiors.

Having a magical image translated into practical science — and with real-world applications to boot — makes this story the kind of attention-grabber Sagan would have loved. The work involves an international team led by Dominik Kraus (Helmholtz Zentrum Dresden-Rossendorf), with experiments taking place at the SLAC National Accelerator Laboratory in Menlo Park, CA.

Image: By conducting experiments at the Linac Coherent Light Source — one of the world’s most powerful X-ray lasers — an international team of researchers led by HZDR physicist Dr. Dominik Kraus was able to demonstrate that hydrocarbon compounds split into carbon and hydrogen inside ice giants such as Neptune, shown here. The carbon turns into a “diamond shower.” Credit: Greg Stewart / SLAC National Accelerator Laboratory.

The ice giants of our outer system – and doubtless in other systems – contain solid cores thought to be surrounded by different ices — hydrogen molecules connected to lighter elements. What Kraus and colleagues wanted to do was to simulate the environment 8000 kilometers down, where high pressure produces diamonds that fall as precipitation deep into the interior.

The environment inside an ice giant was simulated by creating shockwaves in plastic using an optical laser beam at the Matter in Extreme Conditions (MEC) instrument at SLAC’s Linac Coherent Light Source (LCLS). Carbon atoms in the original plastic emerged as part of nanometer-scale diamond structures. On Uranus or Neptune, the researchers believe, such diamonds would be considerably larger and would eventually sink to the planet’s core.

The polystyrene used in the experiments is made from a mixture of hydrogen and carbon, and is used to simulate compounds formed from the methane that gives Neptune its distinctive color. Deep below the clouds of the ice giants, methane forms carbon and hydrogen chains that respond to the high pressure further down by forming the kind of diamond rain observed.

At SLAC, the optical laser created pairs of shock waves in the plastic which, when overlapping, produced the pressure needed to form the diamonds. At this point, the reaction could be probed with 50 femtosecond X-ray pulses from the LCLS, a kind of X-ray snapshot of the reaction.

“For this experiment, we had LCLS, the brightest X-ray source in the world,” said Siegfried Glenzer, professor of photon science at SLAC and a co-author of the paper. “You need these intense, fast pulses of X-rays to unambiguously see the structure of these diamonds, because they are only formed in the laboratory for such a very short time.”

The phenomenon is fascinating enough on our own ice giants, but the work has interesting implications for exoplanets because better models of planetary interiors can change the way we evaluate the relationship between mass and radius. The researchers believe the infall of diamond rain could also prove to be an additional heat source as it approaches the core.

The SLAC work goes beyond earlier attempts to simulate the formation of diamonds in ice giants by capturing measurements in real time, a feat made possible here through the combination of the optical lasers at MEC combined with X-ray pulses from the LCLS. We wind up with a glimpse of high-pressure diamond formation that agrees with theory and gives us further insight into the conditions inside planets like these. And conceivably, the clumping behavior of matter observed in this and other matter compression studies could give us better insight into the fusion of forms of hydrogen into helium, a process we’ve yet to master.

Sagan’s diamond star? “Some white dwarfs are largely carbon,” he writes in The Cosmic Connection. “We may speak of a star made of diamond.” Not quite the same phenomenon as a rain of diamonds on Neptune, though he does go on to quote Bob Dylan’s “To dance beneath the diamond sky / With one hand waving free,” a poetic stretch we can still enjoy whether it’s raining or not.