I don’t usually talk about spacecraft close to our own Sun, but exceptions invariably arise. Centauri Dreams took a close look at the Parker Solar Probe back in June, because its operations close to the Sun (within about 10 solar radii) have implications for how we might build the kind of spacecraft that can perform ‘sundiver’ maneuvers, approaching the Sun before deploying a solar sail for maximum effect (see Parker Solar Probe: Implications for Sundiver). Sundivers are one way to maximize acceleration for future interstellar missions.

And then there’s Venus, a planet I’ve written little about in these pages. The Automaton Rover for Extreme Environments (AREE) concept study now being funded by the NASA Innovative Advanced Concepts program is intriguing because it looks at spacecraft design from a fresh angle, actually one that harkens back to generations of mechanical devices that have had little part in space exploration. At least, until now. For while the environment on Venus challenges all our surface rover concepts, a hybrid mechanical/electronic design might save the day. The implications for other extreme environments in the outer system are quite interesting.

AREE grows out of ideas first proposed in 2015 by JPL engineer Jonathan Sauder, who drew on his knowledge of mechanical computers, the sort of calculating machines that use levers and gears instead of microchips. Think of Charles Babbage’s Difference Engine, which was designed in the 19th Century, or the Greek Antikythera mechanism, which could tell the Hellenistic world in ancient times about upcoming astronomical events like eclipses. 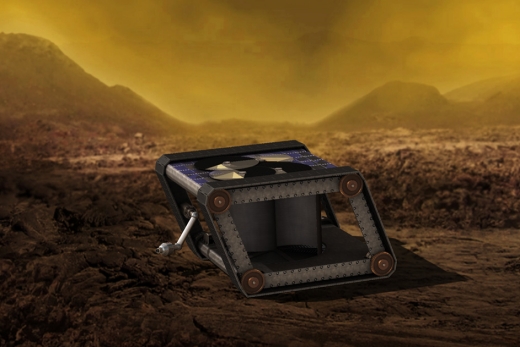 Image: AREE is a clockwork rover inspired by mechanical computers. A JPL team is studying how this kind of rover could explore extreme environments, like the surface of Venus. Credit: NASA/JPL-Caltech.

Sauder likes the idea of using analog technologies on Venus because electronics don’t last long under its extreme pressure and temperatures. If we can limit the use of electronics to the bare essentials and do the rest with analog techniques, we change the paradigm.

The power source? Wind turbines in the center of the rover, storing energy in a constant force spring. Tank treads, or something similar, would replace wheels, while communications would be handled by a rotating shutter placed in front of a bright radar target. The idea would be to turn the bright reflection on and off. Venus rover, meet the Royal Navy circa 1800 communicating with flags and signal lamps.

Build AREE right and you get long-duration in-situ mobility, a rover that might last on Venus’ hellish surface for a year or more (Soviet Veneras lasted for minutes or hours). Sauder considers it an automaton, ‘a mechanical device capable of performing a series of complex actions to achieve a specific result.’ I like the way AREE is described on this NIAC page:

[Automatons] have long been explored as art forms but remain unexplored for space applications. The automaton rover is designed to reduce requirements on electronics while requiring minimal human interaction and based on the subsumption architecture from robotics, where simple reactions of the rover lead to complex behavior. AREE combines steampunk with space exploration to enable science measurements unachievable with today’s space technology.

And the Phase 1 report notes: “High temperature electronics are incorporated where they have sufficient maturity and application, such as instrumentation.”

In other words, we are looking at a hybrid rover heavily dependent on mechanical methods but using electronics where needed. I hasten to add that this concept is maturing and may change substantially as a result of the Phase II work.

Consider the history of Venus exploration to see why alternate approaches are interesting. Venus’ surface reaches 460 degrees Celsius, hot enough to melt lead, while the surface pressures are high enough to crush the hull of a nuclear submarine at 90 bar. The Soviets attempted 14 landings in their Venera and Vega programs, nine of these being a success, but the sturdy probes lasted no more than two hours or so before being rendered inoperative.

“When you think of something as extreme as Venus, you want to think really out there,” said Evan Hilgemann, a JPL engineer working on high temperature designs for AREE. “It’s an environment we don’t know much about beyond what we’ve seen in Soviet-era images.”

The plan, then, is to bake mechanical prototypes of AREE to see how thermal expansion affects their moving parts. Phase 1 of the NIAC study compared mechanical rover technologies to electronics-based rovers using RTG cooling systems and designed to handle high temperatures, finding that current technologies were costly and not yet up to speed. The study also demonstrated the kind of passive signaling that would be deployed on AREE.

Phase II, now in progress, will set about finalizing the locomotion and signaling systems for the mechanical rover and creating a final rover design, a prototype that could perform initial testing. If AREE can work, it could change the game. One recent proposal for a Venus mission used a liquid gas cooling system that despite a price tag between $2 and $3 billion, could survive for less than a day on the surface. Sampling from multiple sites and developing longer-term weather data would be rendered impossible for this kind of device. AREE, with a sharply reduced electronics package, is a relatively low-cost mechanical alternative.

So we may one day be using levers and gears to produce calculations on this hellish world. We can only wonder what Charles Babbage might have made of the idea. Another reference is Pierre Jaquet-Droz, who along with his son produced mechanical automata in the 18th Century of extraordinary complexity. One of these, called The Writer, consisted of 6000 pieces, a mechanical boy with a primitive programmable memory who writes upon paper with real ink.

Mechanical computers experienced major growth in the early 1940s, and as Sauder’s Phase 1 report points out, were at their zenith by the 1940s. Nor were they simple affairs: They had gone from solving arithmetical problems to guiding bomb trajectories and aiming shipboard guns, taking atmospheric conditions into account. Sauder points to the Globus mechanical computer, an automaton that provided trajectory data for every Soviet launch until 2002. At the other end of the scale, mechanical watches and clocks can operate for decades — the oldest mechanical clock has been operated for 700 years. Throw in modern advances and we are now talking about a 10,000 year clock designed to function with minimal maintenance.

Clever mechanisms can be combined with high temperature electronics to enable a platform that is more capable than either technology by itself. For example, one may consider simple addition. An electronic adder requires 576 transistors to combine two 16-bit numbers. To add numbers larger than 16 bits, multiple iterations through software would be required. However, a mechanical analog differential adder can solve the same problem using only 5 gears.

The goal, then, is to look critically at rover design to minimize the electronics package:

By finding these areas where mechanical solutions are relatively simple, the load on the computer can be reduced, thereby enabling a mission. Of course, a differential adder can only perform the adding operation, whereas a processor made up of many transistors can perform many other functions. But for an automaton, where the system is designed to carry out a specialized series of actions, this flexibility is not required. 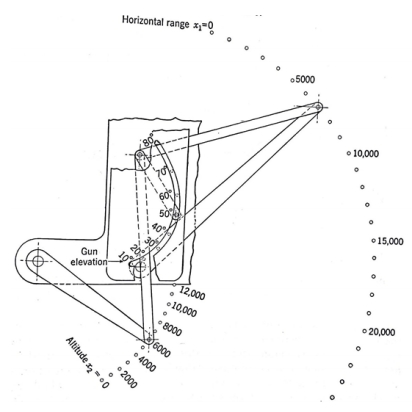 Image: Figure 9 from the Phase I report. A simple example of an analog mechanical computer with multiple inputs. Credit: Jonathan Sauder.

Note that the ability to make science measurements is what Sauder considers one of the greatest weaknesses of a purely mechanical system. We can think, then, of hybrid rovers in which electronics are reduced sharply in complexity by using mechanical analog systems where possible, but still deployed if necessary for high-resolution data. Back to the Phase I report:

Additional study is necessary to leverage the existing suite of high temperature electronics to make critical science measurements targeted towards the mission context. Furthermore, in the coming months it is expected several specific high temperature electronic technologies will be announced for further development through the Hot Tech program. The selection will define what scientific measurements will become the most relevant with soon to be released technology. Therefore, instead of focusing on instrument development, this [Phase 1] study focuses on developing a mobile platform for Venus and other extreme environments which could host various instrument payloads.

And now we move on to the Phase II study. A comeback for automata may prove useful not only on Venus but in any number of difficult environments where the data collection may be basic but persist for long periods of time. Operations near Jupiter, for example, produce significant radiation problems and demand extensive shielding for electronics, just as high pressure environments beneath planetary atmospheres (the interior of a gas giant) challenge the survivability of our best electronic probes. Venus could turn out to be an interesting test case for how we add mechanical methods into our toolkit of deep space exploration.