We’re going to eventually get to know the seven planets of the TRAPPIST-1 system well. That’s because they present the ideal targets for upcoming attempts to probe the atmospheres of Earth-sized rocky planets. Orbiting an M-dwarf some 39 light years out, all seven of the planets here transit. Because of the faintness of their star and the size of the planets themselves, they present excellent candidates for transit spectroscopy, in which we look at the light from the star through planetary atmospheres to deduce their constituents.

Using the Space Telescope Imaging Spectrograph on the Hubble instrument, an international team led by Vincent Bourrier (Observatoire de l’Université de Genève) has been studying the ultraviolet radiation received by each of the planets in the system. The more we know about the star’s output, the more we can plug values into the atmospheric escape processes that can occur in its planets, with huge consequences for surface conditions. The team in particular was looking for the signature of an extended atmosphere for TRAPPIST-1 c. 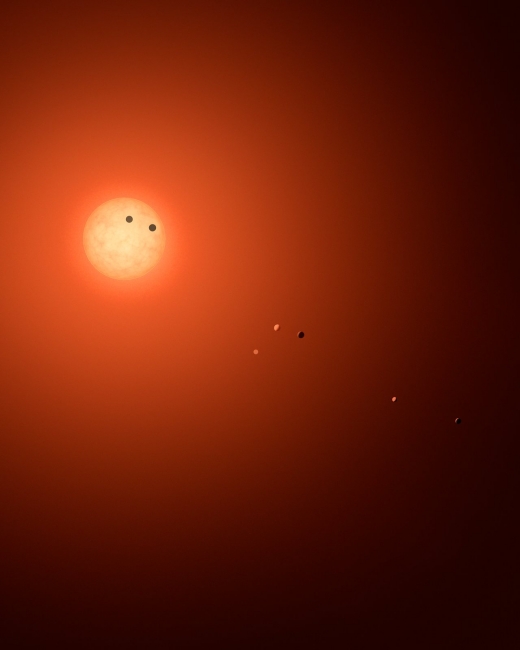 Image: This is an artist’s impression of the TRAPPIST-1 system, showcasing all seven planets in various phases. When a planet transits across the disk of the red dwarf host star, as two of the planets here are shown to do, it creates a dip in the star’s light that can be detected from Earth. During such transits astronomers are able to study the potential atmospheres of these planets. Credit: NASA.

How would such an atmosphere be found? Low-energy ultraviolet radiation can break down water molecules, producing oxygen and hydrogen — the process is known as photo-dissociation. By heating the upper atmosphere, stronger ultraviolet (XUV) radiation as well as X-rays can play a role in letting the hydrogen and oxygen escape into space.

We wind up with hydrogen that can theoretically be detected in the exosphere of the planet, which can be seen as a possible marker for water vapor in the atmosphere. We’ve had hints in earlier transits of planets b and c, also studied by Bourrier, that “could either indicate extended atmospheres of neutral hydrogen or intrinsic stellar variability.” The current work, however, was unable to detect a hydrogen exosphere during a transit of c. We may still be able to find such hydrogen in future observations with the James Webb Space Telescope.

In the absence of such a detection, this paper focuses on the irradiation of the star and the wide range of consequences for water on its planets. We learn that the amount of ultraviolet radiation TRAPPIST-1 is putting out could lead to significant water loss over the history of the system. Based on their measurements, the researchers arrive at an estimate of present XUV radiation and go on to calculate the possible water loss.

This gets interesting because it covers the entire planetary system and describes markedly different rates of water loss. From the paper:

With our current knowledge of the TRAPPIST-1 system, the major uncertainty on the water loss estimates comes from the uncertainty on the planet masses, rather than on the XUV luminosity. Setting the masses to their nominal estimates from Gillon et al. (2017) we found that planets g and closer-in could have lost more than 20 Earth oceans through hydrodynamic escape, if the system is as old as 8 Gyr. Planets b, c, and possibly d could still be in a runaway phase, but if water loss drops down significantly within and beyond the HZ, planets e, f, g, and h might have lost less than 3 Earth oceans.

Image: This artist’s impression shows the view from the surface of one of the planets in the TRAPPIST-1 system. At least seven planets orbit this ultracool dwarf star 40 light-years from Earth and they are all roughly the same size as the Earth. Several of the planets are at the right distances from their star for liquid water to exist on the surfaces. Credit: ESO/N. Bartmann / spaceengine.org.

We would expect planets b and c, the two innermost worlds, to have the highest water loss over the eight billion years this system has been in existence, but it’s notable that planets e, f and g — the three thought to be in the habitable zone — could have lost a good deal less. That would imply the possibility that these perhaps temperate worlds still have water on their surfaces.

The authors point out that their estimates of water loss should be considered as upper limits, because their assumptions probably maximize the rate of the XUV interaction with the atmosphere. All planets except TRAPPIST-1 b and c could, they argue, harbor significant amounts of water, perhaps aided by outgassing, depending on planet formation models that include water content. But this is a tough calculation, and it depends on mass:

The amount of water outgassed after a few hundred Myr (after which TRAPPIST-1 h to e, and possibly d, have entered the HZ), is greater for planets with more massive refractory parent bodies. Improving our constraints on the planet masses of the TRAPPIST-1 system will therefore significantly improve our understanding of the variable outgassing capabilities of the TRAPPIST-1 planets and hence the current state of their atmospheres.

Are there other physical mechanisms that could affect the loss of atmospheres and, possibly, their replenishing? Other gases might slow the outflow, while stellar flares could increase it. On flares, however, Bourrier and team note that they observed no flaring activity in their observations at X-ray and far ultraviolet wavelengths, while earlier observations in the optical and infrared have shown a low rate of flares, with weak flares every few days but stronger flares once every two to three months, a rate the authors consider low.

We also have to take into account the possible effects of the stellar wind from TRAPPIST-1, which can likewise erode atmospheres, especially in the earlier phases of the system’s evolution. Our lack of knowledge of possible magnetic fields, which can affect the rate of atmospheric loss, is due to our lack of information about the composition and structure of the planets here. No wonder, then, that Bourrier is careful about his assessment:

“While our results suggest that the outer planets are the best candidates to search for water with the upcoming James Webb Space Telescope, they also highlight the need for theoretical studies and complementary observations at all wavelengths to determine the nature of the TRAPPIST-1 planets and their potential habitability.”

So much depends on JWST, which may be able to nail down our estimates on any hydrogen exospheres in TRAPPIST-1 planets. The paper is Bourrier et al., “Temporal evolution of the high-energy irradiation and water content of TRAPPIST-1 exoplanets,” accepted at the Astronomical Journal (preprint).

Next post: Red Dwarf UV: Too Little to Spark Life?