On Gas Giants and TRAPPIST-1

You would think that seven planets around TRAPPIST-1 would be more than enough, but Alan Boss and colleagues at the Carnegie Institution for Science are asking whether this system might not also contain one or more gas giants. It’s a theoretical question given weight by the desire to learn more about planet formation, for if we can find gas giants here, it would give credence to a model of gas giant formation championed by Boss. The team has now put constraints on the mass of any gas giants that might lurk here, a prelude to further study.

The core accretion model is widely accepted as a way to create planets like our Earth. Here, the gas and dust disk surrounding a young star shows slow accretion as small particles begin to clump together, gradually forming into planetesimals and, via collisions and other interactions, eventually assembling planets, along with a great deal of leftover debris.

Core accretion can be modeled and seems to fit what we see in other infant planetary systems, but gas giants continue to raise questions. For a gas giant to form this way, it would have to accrete as a solid core that gradually gained enough mass to attract its dense envelope of surrounding gas. One problem with this is that in the lengthy time required for core accretion, the gaseous disk is also depleted. Unless they form relatively quickly, which core accretion rules out, how would gas giants manage to produce such dense atmospheres?

The theory that Boss has long championed holds that there is a process called disk instability in which the circumstellar disk begins to take on a formation something like the spiral arms of a galaxy. Increasing in mass and density, the largest clumps formed in this way would coalesce — on relatively short timescales — into gas giants. Here’s how he explains disk instability in his 2009 book The Crowded Universe:

Most of the mass contained in gas giant planets is hydrogen and helium gas, with only a minor fraction coming from the iron and silicate rocks that form the bulk of the terrestrial planets. These rocks can take their time in forming a planet such as Earth, but the gas needed for forming gas giant planets is known to disappear from young stars on time scales of a few million years or less. Hence, if a gas giant planet is going to form at all, it must do so before the planet-forming disk’s gas disappears through a combination of being eaten by the voracious young protostar and being blown back out into space by winds and radiation from the protostar or other nearby young stars.

All of that demands a rapid gas giant formation process. TRAPPIST-1 comes into play because it’s a low mass star, some twelve times lower in mass than the Sun. If it can produce a gas giant or two, the onus would be on the core accretion model to explain how the system could have produced it. Boss believes disk instability offers an answer. This is why his team, which includes Proxima Centauri b discoverer Guillem Anglada-Escudé, has made such a close study of TRAPPIST-1, one that may eventually let us make the call on the presence of gas giants. 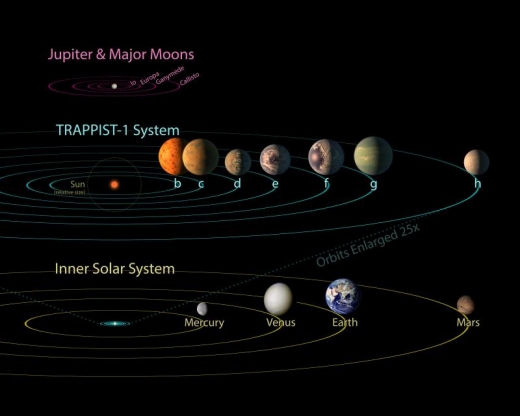 Image: All seven TRAPPIST-1 planets could easily fit inside the orbit of Mercury, our own Solar System’s innermost planet. Alan Boss and his colleagues investigated whether it’s possible that the TRAPPIST-1 system could contain gas giant planets on much longer-period orbits than the seven known terrestrial ones. Credit: NASA/JPL-Caltech.

Boss and colleagues studied the star with astrometric methods, which measure the position of a star in the sky with accuracy great enough to see the slight changes in motion caused by its planets. Astrometry is hard to do, but its rewards are potentially great, as it can provide accurate estimates of a planet’s mass, a value that challenges other planet detection methods. Unlike radial velocity techniques, astrometry works best at planets on long orbital periods, which makes it ideal for trying to locate gas giants like Jupiter in outer system orbits.

If gas giants are eventually discovered at TRAPPIST-1, would this vindicate disk instability in the formation of such worlds? The paper doesn’t go deeply into the matter:

There is work suggesting that core accretion is less likely as a gas giant formation model around M-dwarfs because core accretion operates more slowly in M-dwarf systems, which would mean an outer gas giant is hard to explain without disk instability — core accretion doesn’t give the gas giant enough time to form. Alan Boss was kind enough to go into the problem more fully in an email this morning:

All of this would make any gas giants found around TRAPPIST-1 a likely result of disk instability. Further work on the star using astrometric methods is ongoing and should eventually be able to give us a definitive answer. The team is working to improve its techniques “…with the goal of reducing sources of systematic errors, such as those caused by differential chromatic refraction, and by distortions of the entire optical system that might change with time.”

Next post: Juno: Auroral Activity on Jupiter Up Close