While we track hurricane Irma and its path of devastation in the Caribbean, another kind of storm is affecting the skies over more northerly areas. A strong geomagnetic storm watch continues in effect, making it possible that the aurora borealis — northern lights — will be visible further south than usual, in Scotland and southern Scandinavia but perhaps into the continental United States as well, while the aurora australis could be active for those in the more southerly latitudes below the equator. All of this is due to sunspot AR2673, which is the source of a flare and coronal mass ejection hurled out of the Sun on Monday.

I’ve seen the northern lights in Iceland on one spectacular October night, but only once — in Iowa, in 1970 — have I seen them in the US. The phenomenon results from electrons accelerated as they encounter the Earth’s magnetosphere, following the magnetic field lines to the polar regions, where from 500 kilometers down to 80 kilometers up, they collide with oxygen and nitrogen in the atmosphere. People have described the resulting effect as a rippling curtain, sometimes white, sometimes in shifting colors, which is what I saw in Iceland.

The segue here is to the Juno spacecraft, which is giving us data about the powerful energies swirling around Jupiter’s polar regions, contributing to that planet’s own auroral patterns. Juno made its seventh science flyby on September 1 at 21:49 UTC, with perijove (the point in its orbit when it is closest to the center of the planet) at about 3500 kilometers above the cloud tops.

Juno’s ultraviolet spectrograph and energetic-particle detector instruments are showing us how powerful electrical potentials aligned with the planet’s magnetic field are accelerating electrons into the atmosphere at energies of up to 400,000 volts. This turns out to be 10 to 30 times higher than the largest auroral potentials we’ve ever observed in Earth’s auroras. 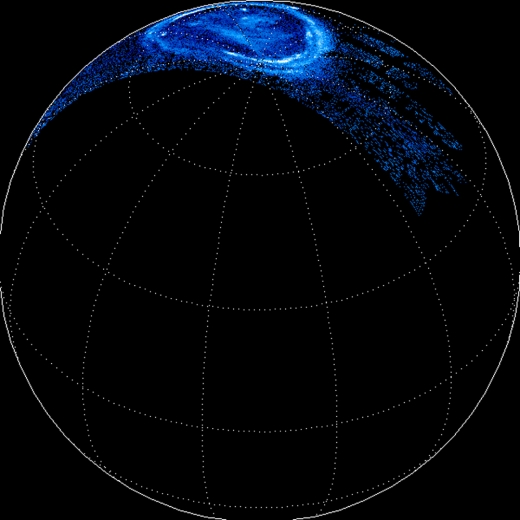 Image: This is a reconstructed view of Jupiter’s northern lights through the filters of Juno’s ultraviolet imaging spectrometer (UVS) instrument on Dec. 11, 2016, as the Juno spacecraft approached Jupiter, passed over its poles, and plunged towards the equator. Such measurements present a real challenge for the spacecraft’s science instruments: Juno flies over Jupiter’s poles at 50 kilometers per second, speeding past auroral forms in a matter of seconds. Credit: NASA/JPL-Caltech/SwRI.

Given that Jupiter was already known to generate the most spectacular auroras in the Solar System, this comes as no surprise. What does raise the eyebrows is that despite the size of these electrical potentials, they do not appear to be the source of the most intense auroras, as they are at the Earth. Barry Mauk (Johns Hopkins University Applied Physics Laboratory) leads the team handling the spacecraft’s Jupiter energetic particle detector Instrument:

“At Jupiter, the brightest auroras are caused by some kind of turbulent acceleration process that we do not understand very well,” said Mauk. “There are hints in our latest data indicating that as the power density of the auroral generation becomes stronger and stronger, the process becomes unstable and a new acceleration process takes over. But we’ll have to keep looking at the data.” 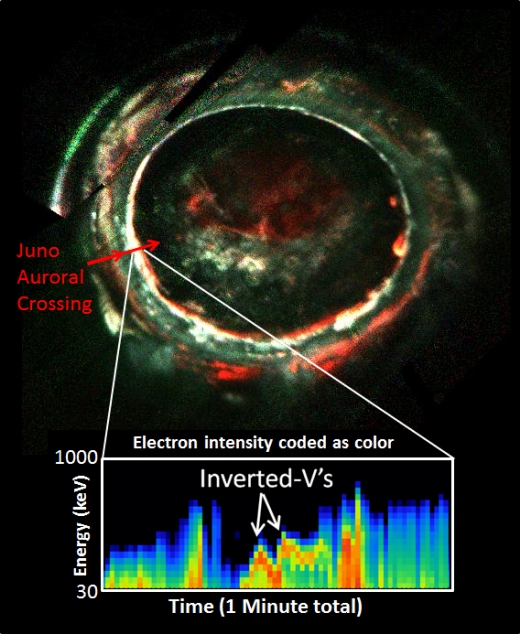 Image: This image, created with data from Juno’s ultraviolet imaging spectrometer, marks the path of Juno’s readings of Jupiter’s auroras, highlighting the electron measurements that show the discovery of the so-called discrete auroral acceleration processes indicated by the “inverted Vs” in the lower panel. This signature points to powerful magnetic-field-aligned electric potentials that accelerate electrons toward the atmosphere to energies that are far greater than what drive the most intense aurora at Earth. Scientists are looking into why the same processes are not the main factor in Jupiter’s most powerful auroras. Credit: NASA/JPL-Caltech/SwRI.

We can take advantage of the extreme conditions at Jupiter to study what happens when charged particles are accelerated to the immense energies on display in Juno’s data, which gives us insights into how distant astrophysical systems operate. But understanding Jupiter’s radiation belts is likewise a key challenge for the near-term, because spacecraft operating in the vicinity of the giant planet, as we want to do when we examine its Galilean moons, face the problem of engineering solutions to withstand these radiation levels.

Space weather, in other words, turns out to be valuable for the lessons it provides on protecting instruments and future astronauts in conditions as harsh as these. So if you do see the aurora borealis or australis tonight, or if you did last night, keep in mind that the comparative study of Earth and Jupiter’s magnetosphere seems to be showing new processes at work at the highest energy levels. That’s all to the good for planetary physics and the health of future missions.