The recent reminder of spacecraft longevity that the Voyagers have given us on their 40th anniversary keeps the memory of their famous Golden Records fresh. After all, only the passage of time — and a lot of it — can degrade these human artifacts, and they carry sights and sounds of our planet specifically chosen to represent us.

Now Jon Lomberg, who was design director for the Golden Record, has thoughts of doing something similar with another long-haul spacecraft, the outer system explorer New Horizons, and has launched a Kickstarter campaign to make it happen.

Clearly the method has to change, given that New Horizons launched without artifacts designed to carry information about our species, other than the obvious message implicit in its own technology. The plan is to take advantage of the spacecraft’s computer memory, or in this case, a few hundred megabytes out of a 4 GB memory chip, which was state of the art in the days when the New Horizons design was finalized. What Lomberg is calling the One Earth Message would be uploaded to the spacecraft through the dishes of the Deep Space Network. 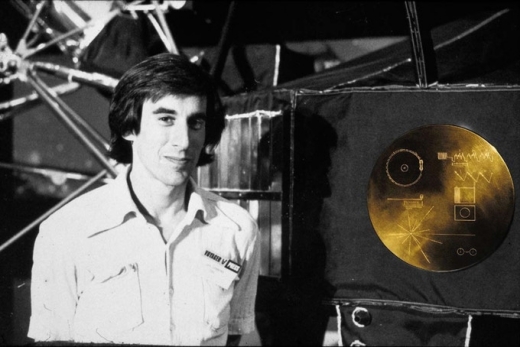 Image: Jon Lomberg, with the Golden Record he and Frank Drake designed for the Voyager probes. Credit: Jon Lomberg.

Like the Pioneer plaque and the Voyager Golden Record, we are talking about a spacecraft carrying a message comprising our own view of our species and our civilization. To say that Lomberg has experience at this kind of thing is to remind us not just of the Voyager work but also the Visions of Mars DVD, a project Lomberg led for the Planetary Society, and one that is now on Mars aboard the Phoenix lander. He is also a co-designer of the Mars sundials that three Martian rovers have carried to the Red Planet.

And I think we can put out of our minds the idea that Lomberg sees the One Earth Message as a form of METI — Messaging to Extraterrestrial Intelligence. Like the Golden Record, the OEM is really about perspective on ourselves:

“I am confident that NASA will seize this opportunity to follow the lead of all four previous spacecraft that have left the solar system and include a message from humanity. We will never know if there is an ET audience, but for the human audience that participates it can be a profoundly moving experience to seriously contemplate communicating with the Cosmos. I now pursue this project as a legacy to my mentors Carl Sagan and Frank Drake.”

The One Earth Message has to fit within the memory constraints available to New Horizons, and obviously would be uploaded after the mission’s science objectives have been met. But images and sounds of the kind found on the Golden Record are in play, and conceivably software or other kinds of digital information, depending on what the crowd-sourced message will become after it has been developed through a collaboration around the globe. The prospect of contributors sending original photography or music is an added enticement for their participation.

Global interaction is what Lomberg’s Kickstarter campaign is meant to support. The campaign seeks the funds to design and launch a platform on the Internet that will be the fulcrum of the One Earth Message project, with submissions to begin in 2018. The plan is for the various images and sounds to be freely submitted over the Net and then chosen through a process of online voting, to create what Lomberg calls ‘a self-portrait of Earth in the second decade of the 21st Century.” The proposed upload date, assuming NASA agrees, is 2020, but none of that can occur without the website development to create the message itself.

Image: New Horizons’ current position along its full planned trajectory. The green segment of the line shows where New Horizons has traveled since launch; the red indicates the spacecraft’s future path. Positions of stars with magnitude 12 or brighter are shown from this perspective, which is slightly above the orbital plane of the planets. Credit: JHU/APL.

New Horizons is currently moving at 14.24 kilometers per second, enroute to Kuiper Belt Object 2014 MU69. The craft is 3.96 AU from its KBO target and 39.01 AU from the Earth, with a round trip light time of 10 hours, 48 minutes as of 13 September at 1100 UTC. For those who, like me, are obsessed with deep time, New Horizons is headed in the direction of Sagittarius, a route that points it toward the center of the galaxy.

Will another spacecraft carry what Arthur C. Clarke called “The Songs of Distant Earth”? There are those who believe that all missions that leave the Solar System should carry some kind of compilation reflecting their builders, and we now have an opportunity to craft a digital message for a mission that left home without one, assuming NASA formally approves the project. Creating the website mechanism and producing the actual message described in the Kickstarter campaign, Lomberg believes, will be the best way to gain NASA’s nod.