Cassini mission engineers are referring to its final pass by Titan as ‘the goodbye kiss,’ a phrase that sounds like something from a Raymond Chandler novel. Maybe it’s the juxtaposition of intimacy and death that Chandler exploited so well. In any case, what counts in the last of Cassini’s hundreds of passes over Titan in its 13-year exploration of the system is the gravitational nudge that is sending the spacecraft into Saturn’s atmosphere tomorrow.

“Cassini has been in a long-term relationship with Titan, with a new rendezvous nearly every month for more than a decade,” said Cassini Project Manager Earl Maize at NASA’s Jet Propulsion Laboratory in Pasadena, California. “This final encounter is something of a bittersweet goodbye, but as it has done throughout the mission, Titan’s gravity is once again sending Cassini where we need it to go.”

Closest approach for the final pass at Titan occurred at 1504 EDT (1904 UTC) on September 12, at an altitude of 119,049 kilometers, with data streaming back to Earth containing science and trajectory information that confirms Cassini’s course for the Saturn atmosphere entry. 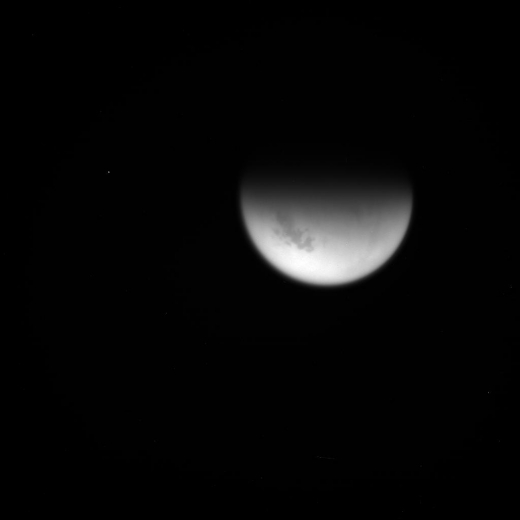 Loss of contact comes on September 15 at 0755 EDT (1155 UTC), about a minute after Cassini’s entry into the atmosphere at an altitude of 1915 kilometers above the cloud tops.

Moving at 113,000 kilometers per hour, Cassini will enter Saturn’s sky on the day side near local noon at about 10 degrees north latitude. Although the spacecraft’s attitude thrusters will begin firing to keep its high-gain antenna pointed at Earth, they’ll go from 10 percent to 100 percent of capacity within about a minute, fighting for stability and the maintenance of the all-important data link. Communications will end when the antenna loses its lock on the Earth, and the spacecraft should begin breaking apart within 30 seconds after the loss of signal.

Image: NASA’s Cassini spacecraft is shown during its Sept. 15, 2017, plunge into Saturn’s atmosphere in this artist’s depiction. Cassini will use its thrusters to keep its antenna pointed at Earth for as long as possible while sending back unique data about Saturn’s atmosphere. Credit: NASA/JPL-Caltech

Coverage of the end of Cassini’s mission will be available live on NASA TV beginning at 0700 EDT (1100 UTC) tomorrow, the 15th — check here for information on coverage. And bear in mind with regard to the signal loss time I cited above that what we receive on Earth will have actually happened 83 minutes earlier, as JPL’s Maize reminds us:

“The spacecraft’s final signal will be like an echo. It will radiate across the solar system for nearly an hour and a half after Cassini itself has gone. Even though we’ll know that, at Saturn, Cassini has already met its fate, its mission isn’t truly over for us on Earth as long as we’re still receiving its signal.” 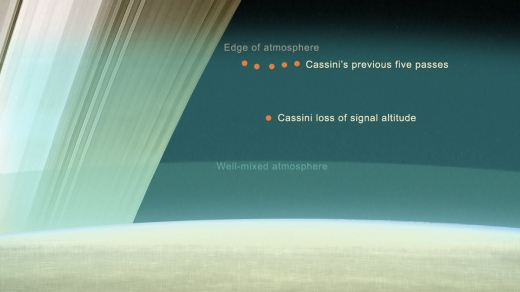 Image: Graphic showing the relative altitudes of Cassini’s final five passes through Saturn’s upper atmosphere, compared to the depth it reaches upon loss of communication with Earth. Credit: NASA/JPL-Caltech.

The spacecraft will be using eight of its 12 science instruments during the final approach, including all of its magnetosphere and plasma science instruments as well as its infrared and ultraviolet spectrometers. JPL is noting the importance of the Ion and Neutral Mass Spectrometer, which will be sampling the composition and structure of the atmosphere while being oriented in the direction of motion to produce the best possible sample.

A final set of views from Cassini’s imaging cameras will be transmitted to Earth today, with posting in unprocessed form beginning on the mission website around 2300 EDT (0300 UTC). 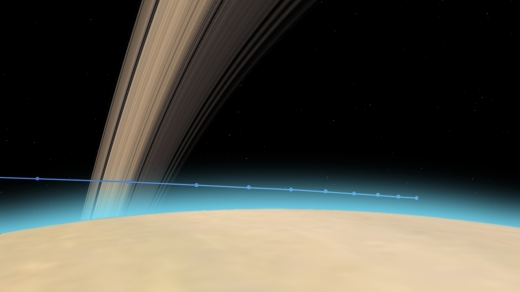 We’ve been talking about the end of this mission for a long time, but I do want to be sure you’re armed with the video link as well as the online toolkit for the final plunge. Social media addresses are https://twitter.com/CassiniSaturn and https://www.facebook.com/NASACassini, and you can keep an eye on #GrandFinale on Twitter as well.