Sara Seager often describes the distribution of exoplanets as ‘stochastic,’ meaning subject to statistical analysis but hard to predict. A good thing, then, that Kepler has given us so much statistical data to work with, allowing us to see the range of possible outcomes when stars coalesce and planetary systems emerge around them. We’re not seeing copies of our own Solar System when we explore other stellar systems, but a variegated mix of outcomes.

Thus finding a planet with an albedo as dark as fresh asphalt goes down as yet another curiosity from a universe that yields them in great abundance. The planet is WASP-12b, a ‘hot Jupiter’ of the most extreme kind. Previous work on this heavily studied world has already shown that due to its proximity to its host star, the planet has been stretched into an egg shape, while its day-side temperatures reach 2540 degrees Celsius, or 2810 Kelvin.

94 percent of incoming visible light here is trapped in an atmosphere so hot that clouds cannot form to reflect it. Hydrogen molecules are broken into atomic hydrogen, while alkali metals are ionized. The atmosphere resembles that of a low mass star instead of a planet, composed of atomic hydrogen and helium. Using Hubble’s Space Telescope Imaging Spectrograph, the international team that produced this result, led by Taylor Bell (McGill University), has now measured an albedo of 0.064 at most, two times less reflective than our Moon. 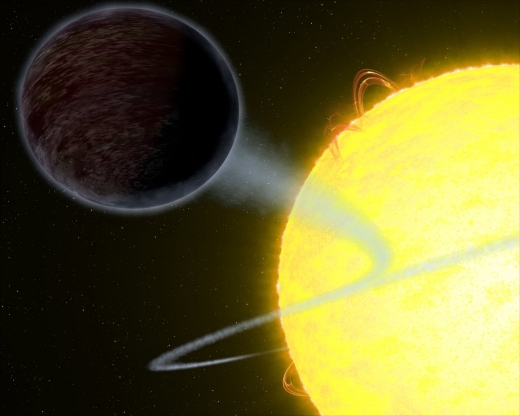 Image: Twice the size of Jupiter, WASP-12b has the unique capability to trap at least 94 percent of the visible starlight falling into its atmosphere. Credit: NASA, ESA, and G. Bacon (STScI).

The planet’s radius is about twice Jupiter’s. The average hot Jupiter will reflect about 40 percent of incoming starlight, making WASP-12b a statistical outlier. But bear in mind that this planet’s proximity to its host star keeps it tidally locked, with one side always facing the star, the other always turned to space. That drops nightside temperatures well over 1000 degrees Celsius cooler, so that molecules can survive, producing possible clouds and hazes in the atmosphere.

Bell notes that the planet, orbiting about 3.2 million kilometers from its star, demonstrates that even among hot Jupiters the range of possibilities is surprisingly large:

“This new Hubble research further demonstrates the vast diversity among the strange population of hot Jupiters,” Bell said. “You can have planets like WASP-12b that are 4,600 degrees Fahrenheit and some that are 2,200 degrees Fahrenheit, and they’re both called hot Jupiters. Past observations of hot Jupiters indicate that the temperature difference between the day and night sides of the planet increases with hotter day sides. This previous research suggests that more heat is being pumped into the day side of the planet, but the processes, such as winds, that carry the heat to the night side of the planet don’t keep up the pace.”

1400 light years away in the constellation Auriga, WASP-12b circles a G-class star not dissimilar to the Sun, in an orbit lasting little more than a day. In addition to Hubble, the Spitzer Space Telescope and the Chandra X-ray Observatory have examined the system. Bell’s work with Hubble’s STIS examined the world by analyzing the combined light of star and transiting planet as WASP-12b passed behind the star. The scientists measured the albedo of WASP-12b at several different wavelengths. The lack of reflected light in the latter observations indicated that the day-side of the planet is absorbing almost all the starlight that falls onto it.

Back to that word ‘stochastic,’ which is reminding us that even when we look at a seemingly well-defined category of planet, our observations can yield wide differences. As the paper notes:

Our results are in stark contrast with those for the much cooler HD 189733b, the only other hot Jupiter with spectrally resolved reflected light observations (Evans et al. 2013); those data showed an increase in albedo with decreasing wavelength. The fact that the first two exoplanets with optical albedo spectra exhibit significant differences demonstrates the importance of spectrally resolved reflected light observations and highlights the great diversity among hot Jupiters.

Notice that reference to another well studied planet, HD 189733b. Results for the latter suggest that the planet has a deep blue color, while Bell’s team has shown that WASP-12b reflects no light at any wavelength. It does, however, emit light because of its high temperature. Think of a red hue, as this HST news release suggests, similar to hot glowing metal.

I might also note how, once again, we have a planetary system far different from our own. In addition to that hot Jupiter, WASP-12b’s host star is orbited by two M-dwarf companions that are bound in a binary system.