When we think about the markers of possible life on other worlds, vegetation comes to mind in an interesting way. We’d like to use transit spectroscopy to see biosignatures, gases that have built up in the atmosphere because of ongoing biological activity. But plants using photosynthesis offer us an additional option. They absorb sunlight from the visible part of the spectrum, but not longer-wavelength infrared light. The latter they simply reflect.

What we wind up with is a possible observable for a directly imaged planet, for if you plot the intensity of light against wavelength, you will find a marked drop known as the ‘red edge.’ It shows up when going from longer infrared wavelengths into the visible light region. The red-edge position for Earth’s vegetation is fixed at around 700–760 nm. What we’d like to do is find a way to turn this knowledge into a practical result while looking at exoplanets. Where would we find the red edge on planets circling stars of a different class than our own?

Led by Kenji Takizawa, researchers at the Astrobiology Center (ABC) of National Institutes of Natural Science (NINS) in Japan have taken up the question with regard to M-dwarfs. These stars have lower surface temperatures than the Sun and emit more strongly at near-infrared wavelengths than at visible wavelengths. Assuming vegetation in such an environment evolves to use the most abundant photons for photosynthesis, shouldn’t we expect the red edge to shift accordingly? Perhaps not, argue the authors, as only blue-green light penetrates beyond a few meters of water. Visible light, in other words, may play a larger role than we imagine.

This is a useful study, because we will begin our observations of possible biosignatures on exoplanets around stars like these, using not only upcoming space missions but ground observatories like the European Extremely Large Telescope, the Thirty Meter Telescope, and the Giant Magellan Telescope. The question is, what effect does the radiation of the star itself have on the red edge? 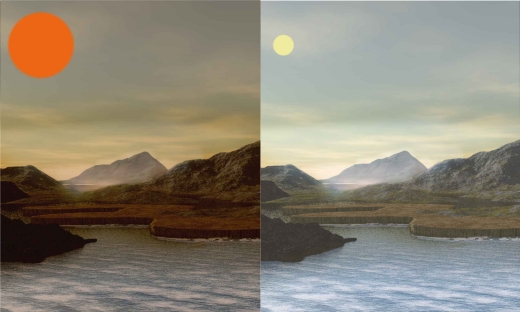 The authors believe that the first oxygenic phototrophs would have evolved underwater, using light at visible wavelengths. The star AD Leonis (AD Leo), an M-dwarf located 16 light years away, served as their model, with Takizawa and team plugging in a hypothetical planet of Earth’s size and insolation in orbit in the habitable zone there, allowing light conditions on the planet to be estimated and compared with solar irradiation on the Earth. The paper predicts ‘photosynthetic machineries’ that could emerge underwater and on land, and goes on to examine the question of land phototrophs evolving in the direction of infrared use from marine phototrophs that evolved in visible light.

After comparative investigations of light environments on the hypothetical habitable exoplanet around AD Leo and on the Earth, we conclude that two-photon reactions using visible radiation may first evolve in an M-dwarf planet’s ocean as oxygenic phototrophs. Reactions using NIR radiation may then evolve on the land surface. The first oxygenic phototroph is most likely to be established underwater about 10 m or deeper, and may expand its habitat to shallow water after the formation of an ozone layer and/or the cessation of UV emission from the active M-dwarf.

At depths of one meter and less, the authors believe, the abundance of near-infrared radiation may stimulate its evolutionary use, though notice what happened on Earth:

…phototrophs using NIR radiation are exposed to drastically changing light conditions in shallow water, which may be an obstacle to using NIR radiation before land colonization. The formation of the ozone layer on the Earth prior to the emergence of land plants enabled them to quickly colonize the land, safe from the effects of UV. A rapid transition from aquatic algae to land plants was accomplished without a change in the photosynthetic machinery. 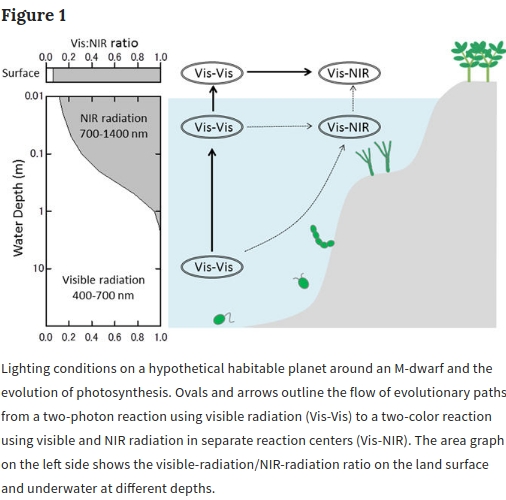 …oxygenic photosynthesis could be driven by low-energy NIR radiation by improving the redox energy conversion efficiency and/or employing multi-photon reactions.

Thus it is possible that a ‘first wave’ of land plants could exhibit a red-edge position at 700–760 nm, as on the Earth. Using near-infrared radiation underwater would expose phototrophs to strong changes in light intensity and quality when they approach the water’s surface. That makes it more likely that adaptation to near-infrared would occur once on land, where the radiation spectral change is smaller.

To take these possible changes into account, astronomers need to look in a broad range when considering biomarkers on red dwarf planets:

…future missions should prepare to record surface spectra of habitable exoplanets at wavelengths from shorter than 700 nm to longer than 1,100 nm so that they have the capability to address the possibility that the red-edge position may change as the host M-dwarf ages.