A Fleet of Sail-driven Asteroid Probes

One of the great values of the Kepler mission has been its ability to produce a statistical sample that we can use to analyze the distribution of planets. The population of asteroids in our own Solar System doubtless deserves the same treatment, given its importance in future asteroid mining as well as planetary protection. But when it comes to main belt asteroids, we’re able to look up close, even though the number of actual missions thus far has been small.

Thus it’s heartening to see Pekka Janhunen (Finnish Meteorological Institute), long a champion of intriguing ‘electric sail’ concepts, looking into how we might produce just such an asteroid sampling through a fleet of small spacecraft.

“Asteroids are very diverse and, to date, we’ve only seen a small number at close range. To understand them better, we need to study a large number in situ. The only way to do this affordably is by using small spacecraft,” says Janhunen.

The concept weds electric sails riding the solar wind with a fleet of 50 small spacecraft, the intent being that each should visit six or seven asteroids, collecting spectroscopic data on their composition and taking images. Dr. Janhunen presented the idea at the European Planetary Science Congress (EPSC) 2017 in Riga on Tuesday September 19. 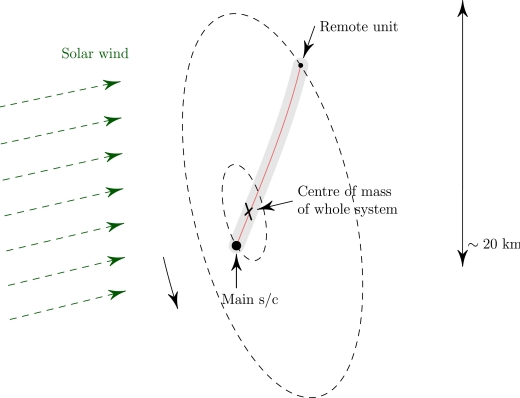 Electric sails ride the solar wind, that stream of charged particles that flows constantly out of the Sun. While solar sails take advantage of the momentum imparted by photons on the sail, and beamed energy sails are driven by microwave or laser emissions, electric sails use the solar wind’s charged particles to generate all the propulsion they need without propellant. What Janhunen envisions is a tether attached to one end of a spacecraft, to which is attached an electron emitter and a high-voltage source, all connected to a remote unit at the other end.

The tether makes a complete rotation every 50 minutes, creating a shallow cone around a center of mass close to the primary spacecraft. Each small craft can change its orientation to the solar wind, and thereby alter its thrust and direction. Janhunen’s presentation at the EPSC made the case that a 5 kg spacecraft with a 20 kilometer tether could accelerate at 1 millimeter per second squared at the Earth’s distance from the Sun. Coupled with the boost provided by the launch itself, this is enough to complete a tour through the asteroid belt and return within 3.2 years. 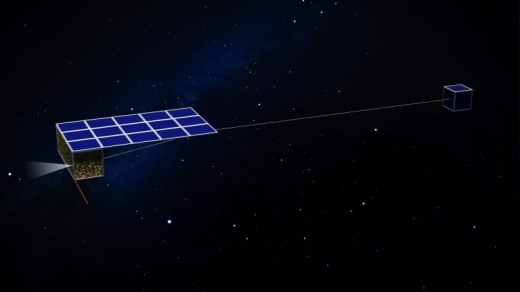 These spacecraft are small enough (Janhunen refers to them as ‘nanosats’) that they cannot carry a large antenna. Instead, the mission concept calls for each spacecraft to make a final flyby of the Earth to download mission data. The financial numbers are compelling. Billions of Euros would be involved in attempting a flyby of 300 asteroids with conventional methods, while Janhunen’s fleet of nanosats could, he believes, fly this mission for 60 million Euros.

The payoff could be substantial:

Working with ever smaller payloads is a recurring theme in deep space exploration, the ultimate example being Breakthrough Starshot’s study of a laser-beamed sail mission to Proxima Centauri’s planet, one that would deploy a fleet of sails just meters to the side, each carrying a payload as small as a microchip. In Janhunen’s concept, the spacecraft are capable of carrying a 4-centimeter telescope capable of resolving asteroid surface features, along with an infrared spectrometer that can analyze reflected light to determine the object’s mineralogy.

With flybys at a range of about 1000 kilometers, the spacecraft would be able to image features to a resolution of 100 meters or better, and with multiple targets for each, the catalog of main belt asteroids that we have seen up close would suddenly mushroom. The mission, being referred to as the Asteroid Touring Nanosat Fleet, would help us catalog the various types of asteroids and provide valuable analysis of their composition and structure, all of which would add to our expertise if and when we ever have to nudge an asteroid into a new trajectory.

200,000 Euros per asteroid is a strikingly efficient use of resources, and the engineering involved in deploying Janhunen’s fleet of electric sails would give us priceless experience as we work with other mission concepts that involve the solar wind. But can we ride a wind as mutable and unpredictable as this one while ensuring the kind of pinpoint navigation we need? Questions like these will need answering in space through the necessary precursors.