The paper in Nature covering an object known as 288P lays out the case in its title: “A Main Belt Comet.” But what makes this story stand out is the fact that 288P is also a binary.

A team of scientists led by Jessica Agarwal (Max Planck Institute for Solar System Research) discovered when 288P neared perihelion in September of 2016 that it was not one but two objects, asteroids of roughly the same mass and size, in a binary separated by about 100 kilometers. Moreover, they have verified that the small system is not quiescent.

Using the Hubble instrument, Agarwal and colleagues discovered that the increased solar heating due to perihelion was producing sublimation of water ice, in much the same way that the tail of a comet is created. Here’s how the paper describes the process on 288P:

Repeated activity near perihelion is a strong indicator of the sublimation of water ice due to increased solar heating. A model of the motion of the dust under the influence of solar gravity and radiation pressure suggests that the activity began with a brief release of comparatively large (millimetre-sized) grains in July, while from mid-September until at least the end of January 2017 (the last of our observations), the dominant grain size fell to ∼10 µm… This indicates that the developing gas production first lifted a layer of large, loosely connected grains, possibly deposited around the end of the previous period of activity in 2011/12. After their removal and with decreasing heliocentric distance, the gas drag became sufficiently strong to lift also smaller particles. 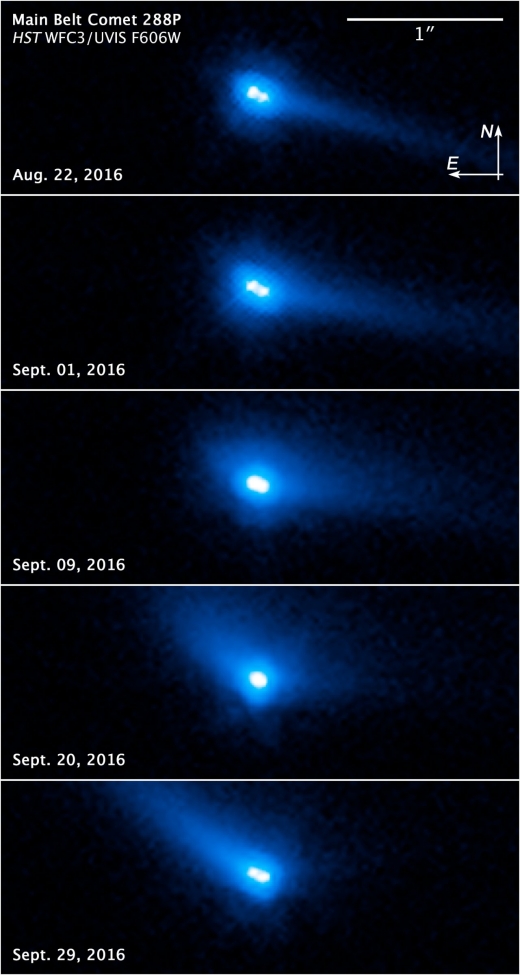 Image: This set of images from the ESA/NASA Hubble Space Telescope reveals two asteroids with comet-like features orbiting each other. These include a bright halo of material, called a coma, and a long tail of dust. The asteroid pair, called 288P, was observed in September 2016 just before the asteroid made its closest approach to the Sun. These images reveal ongoing activity in the binary system. The apparent movement of the tail is a projection effect due to the relative alignment between the Sun, Earth, and 288P changing between observations. The tail orientation is also affected by a change in the particle size. Initially, the tail was pointing towards the direction where comparatively large dust particles (about 1 millimeter in size) were emitted in late July. However, from 20 September 2016 onwards, the tail began to point in the opposite direction from the Sun where small particles (about 10 microns in size) are blown away from the nucleus by radiation pressure. Credit: NASA, ESA, and J. Agarwal (Max Planck Institute for Solar System Research).

288P’s activity gives us clues to its history. For surface ice cannot survive for billions of years in the main belt. As Agarwal notes, it would have to be protected by several meters of dust mantle, which makes 288P as a binary a relatively recent system, perhaps one that has existed for no more than 5000 years. We then factor in the growing interest in asteroids as delivery vehicles for water to the inner system to see why this system may become something of a benchmark.

A decisive factor for the subsequent development of the system is whether the sublimation will last longer than the time required to tidally synchronise the spin and binary orbital periods, which is 5000 years for equal-mass components but orders of magnitude longer for lower mass ratios. Sublimation-driven activity can last longer than 5000 years, such that for high-mass ratio systems it is conceivable that activity prevails after tidal synchronisation. In this case, the recoil force from the local sublimation of water ice can drive binary evolution.

288P is unusual in another way. Asteroid binaries are not uncommon, but most are discovered by radar (when close to Earth) or by analysis of the mutual eclipses revealed in their light curves, assuming a relatively small separation between the two components. Wide binaries like 288P rarely align to produce such eclipses and are too distant to be revealed by radar.

Indeed, it was the evident sublimation of water ice that drew the attention of the researchers. Although a larger sample of wide binaries is needed, Agarwal and team believe the sublimation activity played a decisive role in the evolution of this young binary, affected by the fact that the two components were of nearly equal size, distinguishing 288P from other asteroid pairs.