A Statistical Look at Exoplanet Atmospheres

Comparative exoplanetology? That’s the striking term that Angelos Tsiaras, lead author of a new paper on exoplanet atmospheres, uses to describe the field today. Kepler’s valuable statistical look at a crowded starfield has given us insights into the sheer range of outcomes around other stars, but we’re already moving into the next phase, studying planetary atmospheres. And as the Tsiaras paper shows, constructing the first atmospheric surveys.

Tsiaras (University College, London) assembled a team of European researchers that examined 30 exoplanets, constructing their spectral profiles and analyzing them to uncover the characteristic signatures of the gases present. The study found atmospheres around 16 ‘hot Jupiters,’ learning that water vapor was present in each of them. Says Tsiaras:

“More than 3,000 exoplanets have been discovered but, so far, we’ve studied their atmospheres largely on an individual, case-by-case basis. Here, we’ve developed tools to assess the significance of atmospheric detections in catalogues of exoplanets. This kind of consistent study is essential for understanding the global population and potential classifications of these foreign worlds.” 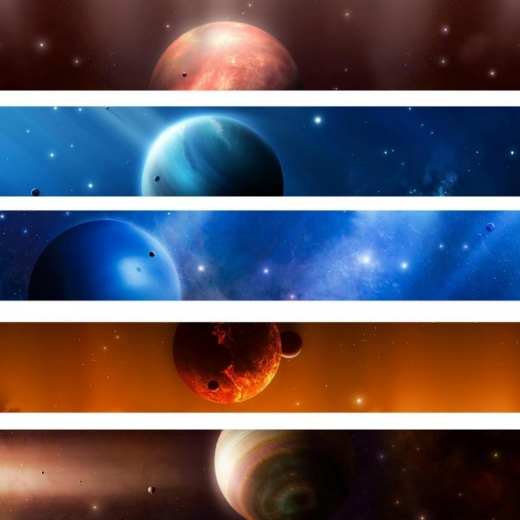 Image: An artist’s impression of the kind of systems studied by the UCL team. Credit: Alexaldo.

Presented at the European Planetary Science Congress (EPSC) 2017 in Riga, the study used archival data from the Hubble telescope’s Wide Field Camera 3 (WFC3), finding that most of the detected atmospheres show evidence for clouds, although the two hottest planets, with temperatures exceeding 1700 degrees Celsius, evidently have clear skies at least at high altitudes. Both of the latter show indications of water vapor, titanium oxide and vanadium oxide.

The authors have defined a metric they call the Atmospheric Detectability Index (ADI) to measure the statistical significance of an atmospheric detection, meaning that while we have 16 planets with atmospheres the metric finds significant, other less detectable atmospheres are present in the rest of the sample. The paper explains the 14 spectra without significant atmosphere detection as the result of opaque, high-altitude clouds or low water abundances. It is highly unlikely, in other words, that gas giant planets will fit any no-atmosphere models.

What jumps out of this work is the fact that the detectability of ‘hot Jupiter’ atmospheres through the ADI metric appears to be dependent on planetary radius rather than planetary mass.

“These results,” the paper adds, “indicate that planetary surface gravity is a secondary factor in identifying inflated atmospheres,” though we should also note that the paper identifies an outlying group of five planets with large radii and no detectable atmospheres. The other planets show the correlation between atmosphere and planetary radius. And it turns out that very hot planets produce strong results with this method. From the paper:

Very hot and highly irradiated planets, with atmospheric temperatures above 1800 K feature high ADI atmospheres. Our quantitative retrievals suggest that the cloud top-pressures in these planets are significantly high, meaning clouds are deep in the atmosphere, if present at all…, while retrieved water abundances are constant within the errors… We can conclude that planets with temperatures higher than 1800 K feature clear atmospheres, confirming that most of the element-carriers are present in a gaseous form at such hot temperatures.

We’ll see how the Atmospheric Detectability Index fares as it is applied to future, larger-scale surveys. For we’ll certainly need such surveys as we enter the era of extremely large telescopes on the ground and new missions that will produce huge numbers of new planet detections. The Tsiaras team’s work is important because it shows we are developing the tools and models that will be applied in the future to much larger samples of planetary atmospheres.

The paper is Tsiaras et al., “A population study of hot Jupiter atmospheres,” submitted to the Astrophysical Journal (preprint).