Just how do you go about building a ‘super-Earth’? One possibility may be emerging in the study of young debris disk systems with thin, bright outer rings made up of comet-like bodies. Three examples are under scrutiny in work discussed at the recent American Astronomical Society’s Division for Planetary Sciences meeting in Provo, Utah. Here, Carey Lisse (JHU/APL) described his team’s results in studying the stars Fomalhaut, HD 32297 and HR 4796A.

What the scientists are finding is that dense rings of comets can become a construction zone for planets of super-Earth size. The makeup of the material in these ring systems varies, from two that are rich in ice (Fomalhaut and HD 32297) to one that is depleted in ice but rich in carbon (HR 4796A). Take a look at the image below, showing the ring surrounding HR 4796A, and you’ll see how strikingly tight the band of dust around this relatively young stellar system is. 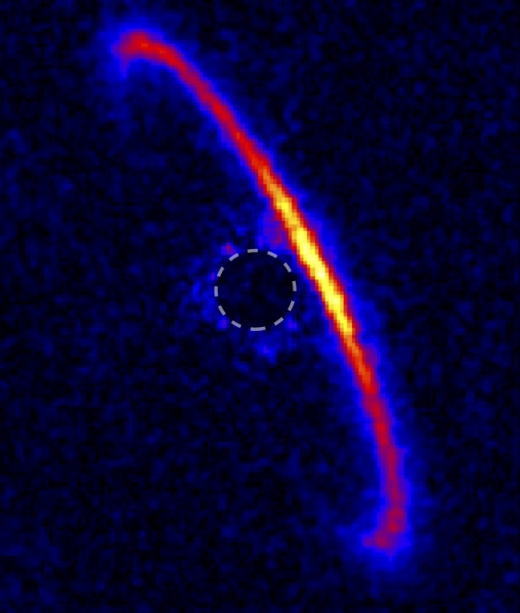 What causes the dust ring here? Lisse believes its red color is the result of the burnt-out rocky remains of comets, with the ring system close enough to the central star that the original materials have largely boiled off. At Fomalhaut and HD 32297, cometary dust containing ices is found, the ring systems being far enough from the central star that their comets remain cold and stable.

But the tight structure of these three ring systems is still problematic, because in young systems we would expect to see a much less orderly situation as the early era of planet formation proceeds. We also see little circumstellar gas in these systems.

Here we might think of what Cassini showed us at Saturn in the form of small ‘shepherding’ moons that preserve ring structure. Could something similar be happening around these stars, varying according to temperature, as emerging planets begin to take shape? Lisse believes this to be the case:

“Comets crashing down onto these growing planet surfaces would kick up huge clouds of fast-moving, ejected ‘construction dust,’ which would spread over the system in huge clouds. The only apparent solution to these issues is that multiple mini-planets are coalescing in these rings, and these small bodies, with low kick-up velocities, are shepherding the rings into narrow structures — much in the same way many of the narrow rings of Saturn are focused and sharpened.” 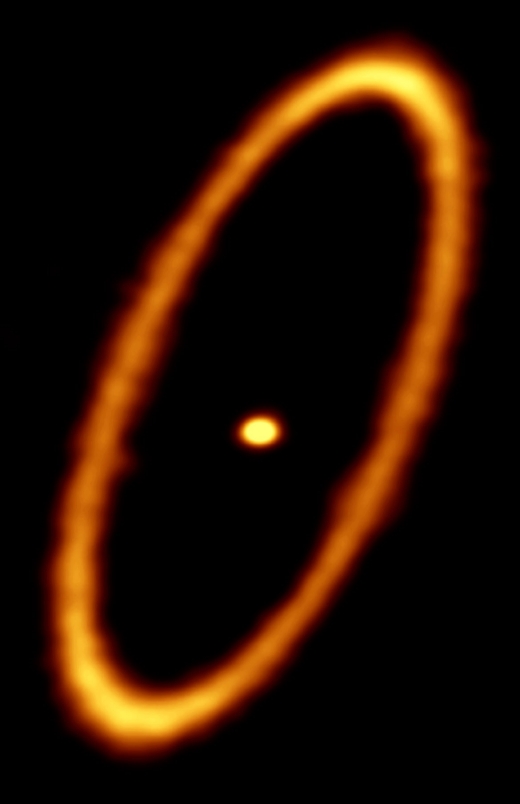 Image: ALMA image of the debris disk in the Fomalhaut star system. The ring is approximately 20 billion kilometers from the central star and about 2 billion kilometers wide. The central dot is the unresolved emission from the star, which is about twice the mass of our Sun. Credit: ALMA (ESO/NAOJ/NRAO); M. MacGregor.

This is an interesting model because it distributes planet formation into a series of small processes within the ring structure. Lisse and team believe that in Fomalhaut and HD 32297, they are seeing the formation of planets out of materials supplied by millions of comets, with planetary cores emerging similar to those of the ice giants Uranus and Neptune. But in this case, the gas disks that would contribute to atmospheres are gone. In HR 4796A, with a warmer dust ring, the core building materials are reduced to leftover carbon and rocky debris.

From a recent Lisse et al. paper on this star:

Our results are consistent with an HR 4796A system consisting of a narrow sheparded belt of devolatilized cometary material associated with multiple rocky subcores forming a planet, and a small steady stream of dust inflowing from this belt to a rock sublimation zone at ~1 AU from the primary. These subcores were built from comets that have been actively emitting large, reddish dust for > 0.4 Myr at ~100K (the temperature at which cometary activity onset is seen in our Solar System).

The potential result: The kind of ‘super-Earth’ planets we do not see in our own Solar System (unless we find such in the conjectured ‘Planet Nine’). The Kepler results showed us super-Earths in abundance. Now this cometary ring theory gives us a way to account for their formation. Still to be resolved: The amount of time it is taking for these planets to finish their formation, a period that has been long enough to see the primordial gas in the stellar disks stripped away. Even Lisse concludes that the issue remains ‘a big mystery.’