An object called A/2017 U1, whether it is an asteroid or a comet, is drawing attention because it seems to be an interstellar wanderer. Discovered on October 19 by the University of Hawaii’s Pan-STARRS 1 telescope on Haleakala, the object was quickly submitted to the Minor Planet Center by Rob Weryk (University of Hawaii Institute for Astronomy, IFA). Weryk was subsequently able to identify the object in Pan-STARRS imagery from the previous night.

Image: This animation shows the path of A/2017 U1, which is an asteroid — or perhaps a comet — as it passed through our inner solar system in September and October 2017. From analysis of its motion, scientists calculate that it probably originated from outside our Solar System. Credit: NASA/JPL-Caltech.

Thus a nightly search for near-Earth objects may have uncovered an object whose origins lie much further away. A/2017 U1 is about 400 meters in diameter and on a highly unusual trajectory, one that fits neither an asteroid or comet from our own Solar System. Davide Farnocchia (JPL) is a scientist at NASA’s Center for Near-Earth Object Studies (CNEOS):

“This is the most extreme orbit I have ever seen,” said Farnocchia. “It is going extremely fast and on such a trajectory that we can say with confidence that this object is on its way out of the Solar System and not coming back.”

Thus we seem to be looking at an object unattached to any star. That such objects exist is hardly a surprise, as we already know there is a robust population of planets that have been ejected from their own stellar systems and wander alone through interstellar space. But if confirmed as such a wandering object, A/2017 U1 would be the first ever observed coming through our own Solar System.

“We have long suspected that these objects should exist, because during the process of planet formation a lot of material should be ejected from planetary systems. What’s most surprising is that we’ve never seen interstellar objects pass through before,” said Karen Meech, an astronomer at the IfA specializing in small bodies and their connection to Solar System formation.

Coming from the direction of the constellation Lyra and moving at 25.5 kilometers per second, A/2017 U1 evidently entered our Solar System from above the ecliptic, crossing the ecliptic plane inside the orbit of Mercury and reaching perihelion on September 9. As the illustration above makes clear, its trajectory was deflected by the Sun’s gravity and it passed ‘under’ the Earth’s orbit on October 14 at a distance of some 24 million kilometers. It is now back above the plane of the planets, moving at 44 kilometers per second, heading toward Pegasus. 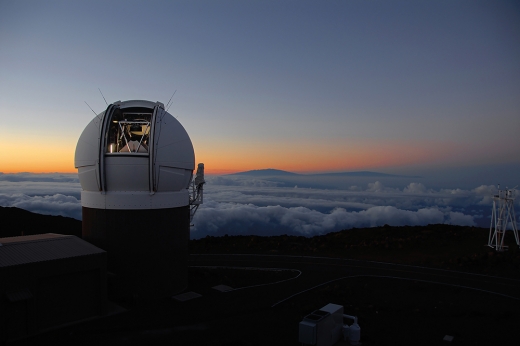 Image: The Pan-STARRS1 Observatory on Halealakala, Maui, opens at sunset to begin a night of mapping the sky. Credit: Photo by Rob Ratkowski.

We’ll have to see what naming conventions come into play if this object is indeed confirmed as an interstellar traveler, putting the onus on the International Astronomical Union to come up with something interesting. You may remember that asteroid 31/439 wound up getting named ‘Rama’ in Arthur C. Clarke’s fine tale Rendezvous with Rama (1973), though we’re unlikely to find that A/2017 U1 is as intriguing as Clarke’s mysterious starship bound for the Magellanics.

Meanwhile, we’re reminded of yet another reason why wide-field surveys of the sky make sense. While we engage in the great task of planetary protection, we also make discoveries like this one, following up with the kind of detailed observations now underway. Compiling the necessary data will help us pin down the origin of this intriguing visitor.