To See a Habitable World

Video presentations from the recent Tennessee Valley Interstellar Workshop are beginning to appear online. It’s welcome news for those of us who believe all conferences should be available this way, and a chance for Centauri Dreams readers to home in on particular presentations of interest. I published my Closing Remarks at TVIW right after the meeting and will watch with interest as the complete 2017 videos now become available. There are a number of these I’d like to see again.

All of this gets me by round-about way to Project Blue, the ongoing attempt to construct a small space telescope capable of directly imaging an Earth-like planet around Centauri A or B, if one is indeed there. For the other talk I gave at TVIW 2017 (not yet online) had to do with biosignatures, and the question of whether we had the capability of detecting one in the near future with the kind of missions now approved and being prepared for launch. This was delivered as part of a presentation and panel discussion with Greg Benford and Angelle Tanner (Mississippi State), one of the conference’s ‘Sagan Meetings.’

The answer is yes, though a highly qualified yes, and Project Blue could be a part of that. When we talk about biosignatures, we are presuming the ability to analyze a planet’s atmosphere, and that is something we’re fully capable of doing today. The fact that such analyses have involved hot gas giants should not deter us, for we’re shaping the methods that will eventually get us down to Earth-mass worlds. These planets won’t necessarily be Earth-like, for the first ones we’ll see in this range will be orbiting red dwarf stars in the immediate neighborhood. 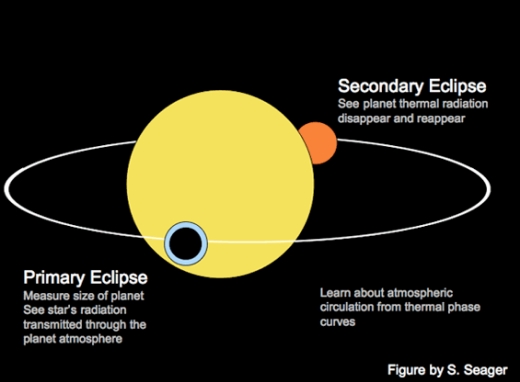 Image: Transmission spectroscopy illustrated. If we can find a transiting world, we can study both the primary eclipse as it moves across the face of the star and the secondary eclipse as the planet’s thermal radiation disappears behind it. Credit: Sara Seager (MIT).

There are reasons for that, most specifically the deep transit depth that an Earth-size planet would present when passing, in a habitable zone orbit, across the face of a nearby red dwarf. In the primary eclipse, some of the starlight we detect has passed through the planet’s atmosphere, giving us the chance to study its components. A biosignature gas is one that is produced by life and accumulates at detectable levels within an atmosphere. We’re especially interested in gases that are out of equilibrium, such as oxygen in the presence of methane.

The point here is that oxygen is unstable over geological timeframes, and would be depleted through reactions with volcanic gases and oxidation unless there existed a source to replace it. A combination of oxygen and methane would indicate a steady source of both, as James Lovelock noted in 1975. The combination is simply out of balance from what would occur through natural processes. Detecting it would indicate the probable presence of life on the planet.

False positive issues abound here, but let’s get into them tomorrow. Because I want to circle back to Project Blue at this point, to discuss the fact that beyond transmission spectroscopy, we have the capability of looking at planets through direct imaging. Coronagraphs are one way of suppressing the light of a central star, and so are starshades, the latter a possibility for the WFIRST mission, which could be constructed so as to be ‘starshade ready’ and thus capable of being joined in space by a later starshade mission that would fly tens of thousands of kilometers away and offer the prospect of detecting planets within 1 AU even of G-class stars like the Sun. In any case, WFIRST is being adapted for a coronagraph whether or not the starshade flies. 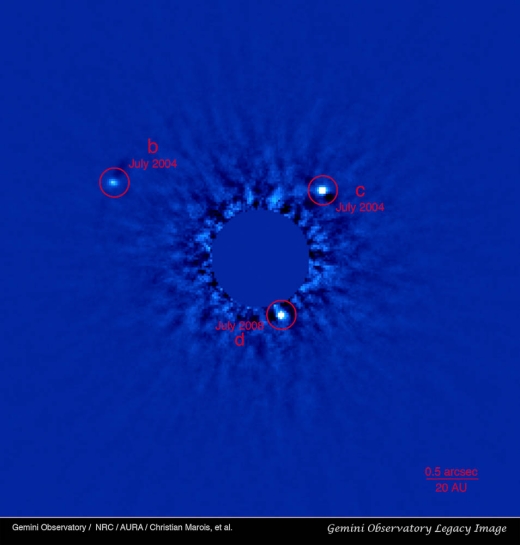 Image: Direct imaging at work. HR 8799 is a star a bit more massive than the Sun, and far younger, about 60 million years old. We see not one but three planets orbiting it. This is the first portrait of an exosolar system. It was announced at the same time as the Fomalhaut candidate, too, giving this system a tie as the first ever seen orbiting a Sun-like star. The planets, labeled b, c, and d, are about 7, 10, and 10 times the mass of Jupiter, respectively, and orbit their star at 68, 38, and 24 times the distance of the Earth from the Sun. It’s possible planets c and d are massive enough to qualify as brown dwarfs. Credit: Gemini Observatory.

I provided the background for Project Blue at the end of September, describing the small telescope originally called ACEsat that, in the hands of Eduardo Bendek and Ruslan Belikov (NASA Ames) later morphed into the crowd-funded Project Blue design. The designers believe that this telescope would be fully capable of photographing a ‘pale blue dot’ around one or both of the primary Alpha Centauri stars, and that would mean we could dispense with transmission spectroscopy and deal with light directly from the planet in question to study its atmosphere.

The Project Blue campaign has a week to run in its attempt to reach a $175,000 goal (it’s 73 percent of the way there as of this morning). Giving the campaign an additional boost is the action of a donor who has pledged to match contributions until the goal is reached, making every dollar people contribute turn into two. Check the project’s Indiegogo page for further information about its light suppression techniques, which include not only a coronagraph but a deformable mirror, low-order wavefront sensors and software control algorithms to manipulate incoming light, as well as post processing methods that substantially enhance image contrast. 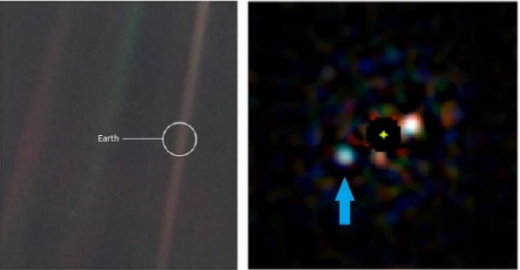 Image: (L) Voyager’s ‘pale blue dot’ photo of Earth from the edge of our Solar System; (R) A simulated image of a photo Project Blue aims to take of exoplanets around one of the stars in the Alpha Centauri system. (Credit: NASA JPL / Jared Males).

Have a look at the Project Blue page and help if you can. The goals involved are to set the science requirements for the mission, complete the opto-mechanical design and request industry letters of interest, while developing a mission performance simulator to analyze different configurations (the latter will eventually become available online).

A mission like Project Blue could conceivably move the timetable forward in terms of biosignature detection, if absolutely everything falls into place and the right kind of planet is indeed orbiting Centauri A or B. Thus, between upcoming red dwarf investigations using the James Webb Space Telescope (aided by data from the Transiting Exoplanet Survey Satellite), and possible direct imaging of an Earth-like planet around the nearest star system, we could conceivably detect biosignatures within the next ten to fifteen years. It’s a stretch, and I’ll explain why tomorrow, but add a decade or two to the timeline and the odds begin to climb.