How likely are we to find a definitive biosignature once we begin analyzing the atmospheres of nearby rocky exoplanets? We have some ideal candidates, after all, with stars like TRAPPIST-1 yielding not one but three potentially life-bearing worlds. The first thing we’ll have to find out is whether any of these planets actually have atmospheres, and what their composition may be.

‘Habitable zone’ is a fluid concept, and that’s not just a reference to liquid water on the surface. A relatively dry terrestrial planet, one with little surface water and not a lot of water vapor in the atmosphere, might avoid a runaway greenhouse and manage to stay habitable in an orbit closer to a G-class star than Earth. A planet with an atmosphere dominated by hydrogen could maintain warm temperatures even at 10 AU and beyond. So we’ll need to find out what any exoplanet atmosphere is made of, and weigh that against its orbital position near its star. 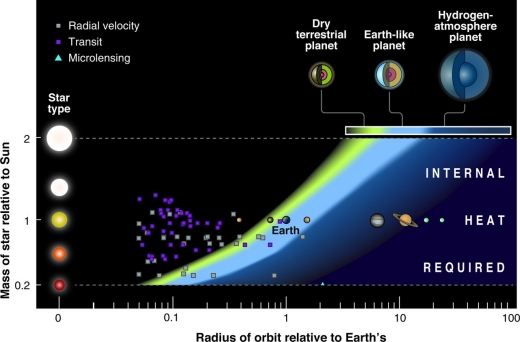 When we use terms like ‘Earth-like’ in relation to atmospheres, we’re talking about nitrogen, oxygen and carbon dioxide, but we also have to remember that atmospheres develop and change over time. The early Earth would have begun with abundant hydrogen and helium, but volcanic eruptions could later supply carbon dioxide, water vapor, sulphur and more. We needed a huge oxygenation event two and a half billion years ago to bring oxygen levels up. Exactly where would an exoplanet be in its development during the time we are able to observe it?

So assume we start examining those interesting transiting worlds around TRAPPIST-1 and find that one of them shows traces of oxygen. Cause for celebration? Certainly, but we’re still a long way from determining whether life is present. Because there are models for oxygen-rich atmospheres that are completely abiotic. TRAPPIST-1 is an M-dwarf, and we know that ultraviolet light from the star can break down carbon dioxide, adding oxygen to the mix.

Water vapor in a planetary atmosphere can likewise be broken down into hydrogen and oxygen through UV radiation, so oxygen by itself is not enough. We saw yesterday that a simultaneous detection of methane would be a much more satisfactory signature. Here we’re looking at two gases that should remove each other from the atmosphere in short order unless there were something there to sustain them. Let me quote Stephen Reinhard (NASA GSFC, and a project scientist on the Transiting Exoplanet Survey Satellite mission) on the matter:

“There are a couple of things we like to see as a potential for habitability — one of them is water, which is probably the single most important, because as far as we know, all life that we’re familiar with depends on water in some way. The other is methane, which on our Earth is produced almost entirely biologically. When you start seeing certain combinations of all of these things appearing together — water, methane, ozone, oxygen — it gives you a hint that the chemistry is out of equilibrium. Naturally, planets tend to be chemically stable. The presence of life throws off this balance.”

Now that sounds pretty straightforward, and surely a simultaneous detection of oxygen and methane would make a strong case for life. But even here, we have to be careful. If there are abiotic sources of oxygen, there are also abiotic sources of methane, even if most of the methane found in our own planet’s atmosphere is associated with living processes. Volcanism is one methane source, and we’ve learned recently that carbon-rich micrometeoroids can produce methane as they burn up upon entry into a planet’s atmosphere.

Systems with larger amounts of dust than our own could conceivably produce a high enough methane signature in a planetary atmosphere to be noted by our space observatories, further complicating the search for life. Here again we’ll have to pay particular attention to the age of the system we’re studying, for systems with dense debris disks are those likely to produce this effect, with planets perhaps undergoing their own version of our Late Heavy Bombardment, when some 3.9 billion years ago our world was pummeled by millions of collisions.

When I said yesterday that it was possible we might get a biosignature detection within as little as ten years, what I was really saying was that we might get some evidence of biology, but very likely it would be ambiguous and hotly contested. Rather than a sudden announcement that life has been found in another star system, the news is likely to emerge as a battle of competing analyses, trying to determine whether what we see could be explained without implicating life.

We also need to pay attention, as Sara Seager and colleagues are doing, to what other gases might be involved in biosignatures. Indeed, life on our planet produces thousands of different gases, most of them in small quantities that accumulate little in the atmosphere. Most are produced for reasons specific to the organism they support, and they do so guided by little more than evolutionary selection. The point here is that life on another world may have surface and atmospheric conditions that produce chemistries profoundly different from Earth’s.

Hence Seager’s interest in studying all the molecules that exist in gas form in a planetary atmosphere in conditions similar to the temperature and pressure of Earth. A recent paper on this work presents results from an examination of 14,000 molecules, about 2500 of which are hydrocarbons, with the goal of eventually producing a truly comprehensive list of biosignature gases and the false positives that accompany them. If there is one thing we can probably state with some confidence, it is that early exoplanet atmospheric studies will produce surprises.

Getting ready for them is what studies like Seager’s are all about. What we’re going to need as we begin to detect ambiguous evidence for biosignatures is a large space telescope well beyond WFIRST in capabilities, one capable of pulling in atmospheric data from enough exoplanets that we can begin to develop a statistical understanding of what we’re seeing. Designs like LUVOIR (Large UV/Optical/Infrared Surveyor) and HabEx (Habitable Exoplanet Imaging Mission) are under study, even as we look beyond them to the kind of mirror technologies that may allow still bigger instruments and more comprehensive analysis.

The Seager paper is Seager, Bains and Petkowski, “Toward a List of Molecules as Potential Biosignature Gases for the Search for Life on Exoplanets and Applications to Terrestrial Biochemistry,” Astrobiology 16(6) (June 201), 465-485 (abstract).