The Next Generation Transit Survey has come up with an interesting catch. A gas giant close to the size of Jupiter (about 20 percent less massive) has turned up orbiting a red dwarf some 600 light years away, with an orbital period of 2.6 days. With a temperature calculated at 800 Kelvin, NGTS-1b stands out not because it is a ‘hot Jupiter’ but because stars as small as this one are not normally associated with gas giants. The new planet is, in fact, the largest planet — compared to the size of its companion star — ever discovered. 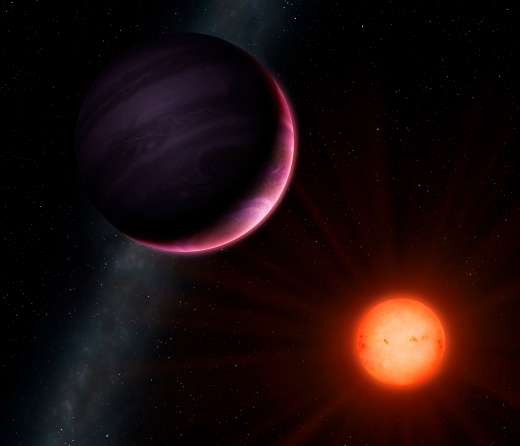 The Next Generation Planet Survey is a wide-field photometric survey designed to find transiting exoplanets of Neptune-class and smaller around bright stars, using an array of fully-robotic small telescopes operating in the 600-900nm band. The survey is thus sensitive to K and early-M class stars, the goal being to provide targets for instruments ranging from the upcoming European Extremely Large Telescope to the James Webb Space Telescope.

Sited at the European Southern Observatory’s Paranal site in Chile, the survey now has its first catch, about which lead author Daniel Bayliss (Geneva Observatory) comments:

“The discovery of NGTS-1b was a complete surprise to us – such massive planets were not thought to exist around such small stars. This is the first exoplanet we have found with our new NGTS facility and we are already challenging the received wisdom of how planets form.”

We only have three transiting gas giants around M-dwarfs, which are the most common type of star in the galaxy. The two previously discovered planets are Kepler-45b and HATS-6b, the latter a warm transiting ‘Saturn.’ The radius of NGTS-1b has proven tricky to determine because this is a ‘grazing’ transit at the edge of detection — not all of the planet transits the host star’s disc. The authors believe that further data from the upcoming Transiting Exoplanet Survey Satellite will improve their models of the system.

We can hope that surveys like NGTS will eventually monitor enough M-dwarfs to give us statistics on the frequency of hot Jupiters around this class of star — the plan calls for approximately 20000 early-type M-dwarfs per year to be monitored. This will be useful information as we continue to learn about planet formation. We would expect gas giants to be rare around M-dwarfs because protoplanetary disk mass decreases with stellar mass, so there is less material to work with and longer, slower process of planet formation at work.

There is also the question of metallicity, about which we have much to learn. Remember that to an astrophysicist, a metal is any element heavier than helium. The paper comments:

It has long been known that for solar-type host stars the incidence of giant planets increases very sharply with increasing host star metallicity (Fischer & Valenti 2005), and very few giant planets have been detected around stars with significantly sub-solar metallicity. However, the same correlation is not seen for Neptunes or super-Earths, whose incidence appears largely independent of metallicity (Sousa et al. 2008; Buchhave & Latham 2015; Jenkins et al. 2017). By robustly determining the metallicity of NGTS-1 and systems like this we will be able to probe if the correlation between metallicty and giant planet frequency remains true for low mass stars.

The paper is Bayliss et al., “NGTS-1b: A hot Jupiter transiting an M-dwarf,” accepted for publication at Monthly Notices of the Royal Astronomical Society (preprint).

Next post: Cold Trap in a Hot Jupiter’s Atmosphere