The other day I looked at how we can use transit spectroscopy to study the atmospheres of exoplanets. Consider this a matter of eclipses, the first occurring when the planet moves in front of its star as seen from Earth. We can measure the size of the planet and also see light from the star as it moves through the planetary atmosphere, giving us information about its composition. The secondary eclipse, when the planet disappears behind the star, is also quite useful. Here, we can study the atmosphere in terms of its thermal variations.

In my recent post, I used a diagram from Sara Seager to show primary and secondary eclipse in relation to a host star. The image below, by Josh Winn, is useful because it drills down into the specifics. 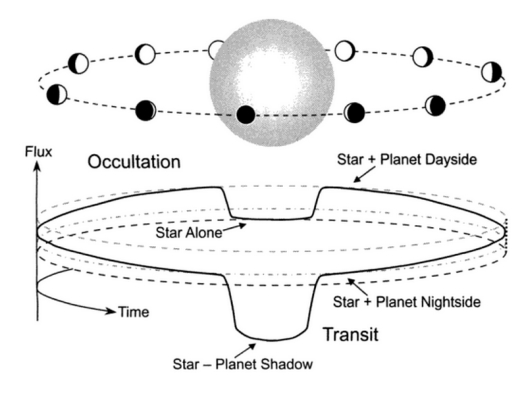 Image: A comparison between transits and secondary eclipses (also sometimes called occultations). In a planetary transit, the planet crosses in front of the star (see lower dip) blocking a fraction of the star’s brightness. In a secondary eclipse, the planet crosses behind the star, blocking the planet’s brightness (see dip in the middle). The latter dip in brightness is fainter due to the faintness of the planet. Credit: Josh Winn. See A New Discovery of a Secondary Eclipse for more background as it applies to the HAT-P-11 system.

Secondary eclipses have been significant in the study of Kepler-13Ab, a world where conditions could not be more different on the planet’s nightside vs. its dayside. A ‘hot Jupiter’ some 1730 light years from Earth, this is a world close enough to its parent star that it is tidally locked. Researchers led by Thomas Beatty (Pennsylvania State) have used the Hubble Space Telescope to determine that that the dayside here can surpass a blistering 3000 Kelvin.

By contrast, the nightside of Kepler-13Ab, turned forever away from the star, is a place where titanium oxide snow can fall. The process is intriguing: Any titanium oxide gas on the star-facing side is carried by strong winds around to the nightside, where the gas condenses into clouds and eventually falls as snow. A gravitational tug six times greater than Jupiter’s pulls the titanium oxide into the lower atmosphere, forming a ‘cold trap’ — an atmospheric layer that is colder than the layers both below and above it. Ascending gases drop back into the trap. 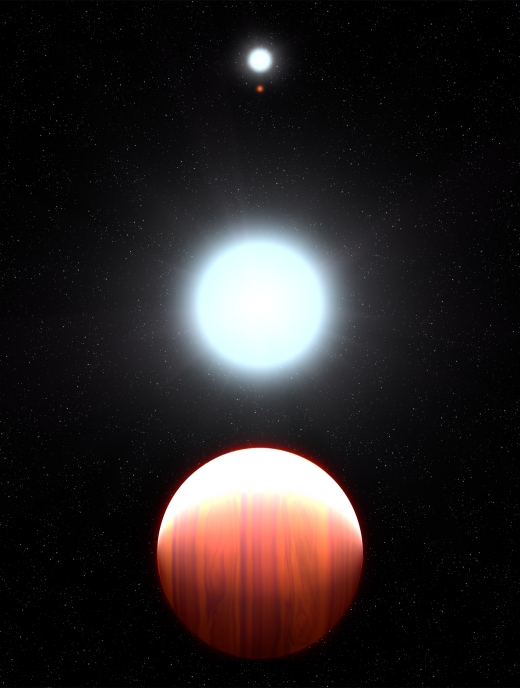 Image: This illustration shows the seething hot planet Kepler-13Ab that circles very close to its host star, Kepler-13A. Seen in the background is the star’s binary companion, Kepler-13B, and the third member of the multiple-star system is the orange dwarf star Kepler-13C. Credit: NASA, ESA, and G. Bacon (STScI).

These Hubble observations are the first time a cold trap has been detected on an exoplanet. The secondary eclipse data reveal that the atmospheric temperature on the dayside actually grows colder with increasing altitude, lacking titanium oxide to absorb light and re-radiate it as heat. Normally, titanium oxide in a hot Jupiter makes the atmosphere warmer at higher altitudes. But larger hot Jupiters possess the characteristics needed for cold traps to form.

We contend that the dual facts that Kepler-13Ab possesses a decreasing temperature–pressure profile and a relatively high surface gravity support the hypothesis of Beatty et al. (2016) that both surface gravity and temperature play a role in determining the presence of a stratospheric temperature inversion in hot Jupiters. Specifically, in high-surface-gravity planets such as Kepler-13Ab, the characteristic freefall time within the atmosphere is substantially shorter (Equation (11)). This should, in turn, substantially increase the efficiency of a day–night (Parmentier et al. 2013) cold-trap process, thereby sequestering the TiO/VO molecules available to cause an inversion in the interior of the planet.

In other words, many of the hot Jupiters we’ve observed likely have precipitation like this, but in those with lower surface gravity than Kepler-13Ab, the titanium oxide snow doesn’t fall far enough to form a cold trap before being drawn back to the dayside of the planet. Note how much information we’re teasing out of secondary transits of a planet we cannot actually see and it should be clear that Beatty is right in referring to the current studies of hot Jupiters as testbeds for how we are going to analyze the atmospheres of terrestrial planets in the future.