How to explain the water vapor and ice blown off in the form of geyser-like jets from Enceladus? It’s a question we need to answer, because we’re learning just how interesting the icy moons of gas giants can be, with the potential for biological activity far from the Sun.

In the case of Enceladus, though, the average global thickness of the ice is thought to be 20 to 25 kilometers. What has thinned the ice at the south pole, where warm fractures expel mineral-rich water into space? An unusual amount of heat is demanded to sustain this ongoing activity, along with a mechanism to explain what is happening within the moon.

The heat in question is likely the result of friction, according to a new study published in Nature Astronomy. The work of Gaël Choblet (University of Nantes, France) and colleagues, the investigation involved modeling by Cassini researchers in Europe and the U.S., tapping the abundant data that the Saturn orbiter returned to Earth in its 13 years at the planet. It was Cassini that first showed us the jets of water vapor and simple organics. 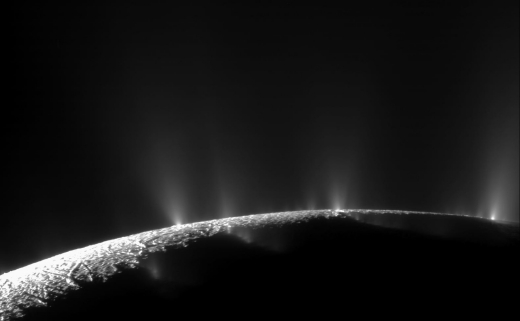 Image: Dramatic plumes, both large and small, spray water ice out from many locations along the famed “tiger stripes” near the south pole of Saturn’s moon Enceladus. The tiger stripes are fissures that spray icy particles, water vapor and organic compounds. More than 30 individual jets of different sizes can be seen in this image and more than 20 of them had not been identified before. At least one jet spouting prominently in previous images now appears less powerful. This mosaic was created from two high-resolution images that were captured by the narrow-angle camera when NASA’s Cassini spacecraft flew past Enceladus and through the jets on Nov. 21, 2009. Credit: NASA/JPL/Space Science Institute.

The authors find evidence in the Cassini data that hydrothermal activity takes place on the seafloor under Enceladus’ ice. Rock grains thought to be the result of this activity show chemistry occurring at temperatures of at least 90 degrees Celsius. What’s intriguing here is that Choblet and team believe the energy required to produce these temperatures exceeds what could be expected from the decay of radioactive elements within Enceladus. Says Choblet:

“Where Enceladus gets the sustained power to remain active has always been a bit of a mystery, but we’ve now considered in greater detail how the structure and composition of the moon’s rocky core could play a key role in generating the necessary energy.”

The result: An Enceladus whose core is relatively loose and rocky, with 20 to 30 percent empty space. The orbiting moon would experience tidal forces that cause rock in the relatively porous core to flex and abrade against adjacent rock, generating the required heat. This internal scenario also accounts for the rise of heated water from the ocean, moving upward and interacting chemically with the rocks. From the paper’s abstract:

Water transport in the tidally heated permeable core results in hot narrow upwellings with temperatures exceeding 363 K, characterized by powerful (1–5 GW) hotspots at the seafloor, particularly at the south pole. The release of heat in narrow regions favours intense interaction between water and rock, and the transport of hydrothermal products from the core to the plume sources. We are thus able to explain the main global characteristics of Enceladus: global ocean, strong dissipation, reduced ice-shell thickness at the south pole and seafloor activity.

If Choblet’s models are correct, we should expect maximum activity from this process at the moon’s poles, with mineral-rich water thinning the ice shell to as little as 1 kilometer at the south pole, and being expelled into space through fractures in the ice. This analysis would explain why Enceladus has thinner ice at the south pole, but it does not explain why north and south poles are so utterly different. Unlike the south pole, Enceladus’ north pole is cratered and ancient.

The circulation of the global ocean over millions of years would mean that the entire volume of the ocean passes through the moon’s core, an amount estimated to equal 2 percent of the volume of Earth’s oceans. The new study goes past earlier work in modeling tidal friction at a higher level of complexity — earlier models found that tidal heating would be insufficient to keep the ocean liquid. The porous core model thus accounts for the plumes we see today, which may result from thinner ice in the south to begin with, causing runaway heating over time.