At 10.89 light years from Earth, Ross 128 is the twelfth closest star to the Solar System, a red dwarf (M4V) first cataloged in 1926 by astronomer Frank Elmore Ross. Now we have news that a team working with the European Southern Observatory’s HARPS spectrograph (High Accuracy Radial velocity Planet Searcher) at the La Silla Observatory in Chile has discovered an Earth-sized planet orbiting Ross 128 every 9.9 days, a world whose orbit could conceivably place it in the habitable zone, where liquid water could exist on the surface. That gives us a second nearby world in an interesting orbit, the other of course being Proxima Centauri b.

What gives the Ross 128 b detection a wrinkle of astrobiological interest is that the star the planet orbits is relatively inactive. Red dwarfs are known for the flares that can flood nearby planets with ultraviolet and X-ray radiation. Compounded with the fact that habitable zone planets must orbit quite close to a parent M-dwarf (given the star’s small size and low temperature compared to the Sun), such flares could act as a brake on the development of life.

Ross 128 b may thus have a higher likelihood for astrobiological activity than Proxima b, assuming that it actually is in the habitable zone. Right now the team behind this work, led by Xavier Bonfils (Université Grenoble Alpes) hedges its bets by referring to the planet as ‘temperate’ and ‘close to the inner edge of the conventional habitable zone.’ 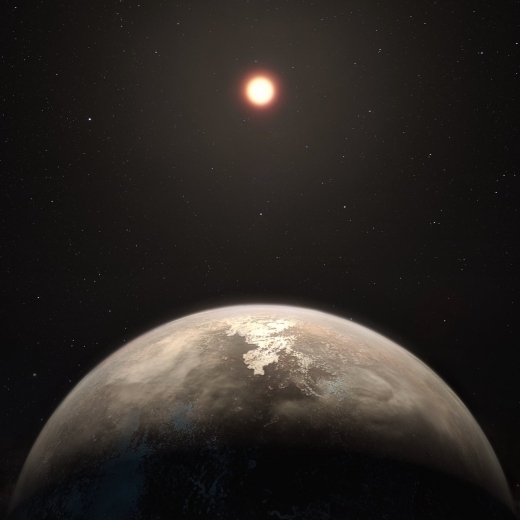 Image: This artist’s impression shows the temperate planet Ross 128 b, with its red dwarf parent star in the background. This planet, which lies only 11 light-years from Earth, was found by a team using ESO’s unique planet-hunting HARPS instrument. The new world is now the second-closest temperate planet to be detected after Proxima b. It is also the closest planet to be discovered orbiting an inactive red dwarf star, which may increase the likelihood that this planet could potentially sustain life. Ross 128 b will be a prime target for ESO’s Extremely Large Telescope, which will be able to search for biomarkers in the planet’s atmosphere. Credit: ESO/M. Kornmesser.

Thus trying to figure out Ross 128 b’s placement in or near the habitable zone is a tricky proposition. Consider this from the paper:

The key point here is that the habitable zone will take a good deal of future work to pin down. The paper resumes with this statement explaining the choice of the word ‘temperate’:

The precise location of the inner edge is therefore still uncertain, as it depends on subtle cloud-albedo feedbacks and on fine details in complex GCM [global climate] models. The habitable zone most likely will not be firmly constrained until liquid water is detected (or inferred) at the surface of many planets. Meanwhile, it is probably preferable to refer to Ross 128 b as a temperate planet rather than as a habitable zone planet. 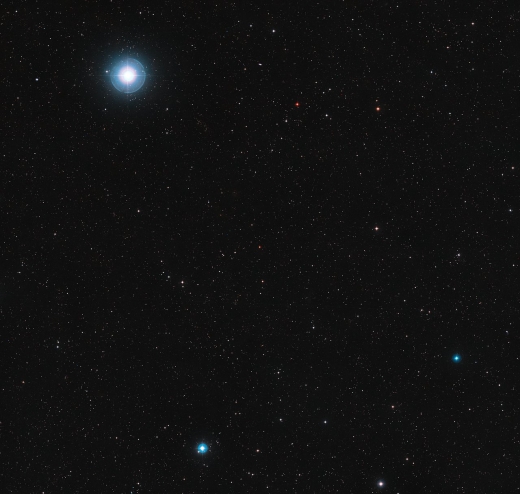 Image: This image shows the sky around the red dwarf star Ross 128 in the constellation of Virgo (The Virgin). It was created from images forming part of the Digitized Sky Survey 2. Ross 128 appears at the centre of the picture. Close inspection reveals that Ross 128 has a strange multiple appearance as this image was created from photographs taken over a more than forty year period, and the star, which is only 11 light-years from Earth, moved across the sky significantly during this time. Ross 128 is a “quiet” red dwarf star and is orbited by Ross 128 b, an exoplanet with a similar mass and temperature to the Earth. Credit: Digitized Sky Survey 2. Acknowledgement: Davide De Martin.

Whether or not Ross 128 b is in the classic habitable zone, it presents an appealing target for future observation with instruments like the European Extremely Large Telescope. Low stellar activity bodes well for the survival of planetary atmospheres and the potential emergence of life on planets orbiting M-dwarfs. Thus this interesting planet will appear high on our target lists for future atmospheric characterization and the search for potential biomarkers.

“New facilities at ESO will first play a critical role in building the census of Earth-mass planets amenable to characterisation. In particular, NIRPS, the infrared arm of HARPS, will boost our efficiency in observing red dwarfs, which emit most of their radiation in the infrared. And then, the ELT will provide the opportunity to observe and characterise a large fraction of these planets,” concludes Bonfils.

The paper is Bonfils et al., “A temperate exo-Earth around a quiet M dwarf at 3.4 parsecs,” accepted at Astronomy & Astrophysics. I’ll post a link to the online abstract and preprint as soon as they become available.

Next post: Mining Asteroids for Fun and Maybe Profit

Previous post: An Origin for a Far Traveling Asteroid