When I first wrote about the interstellar interloper now called ‘Oumuamua, I made reference to Arthur C. Clarke’s Rendezvous with Rama because of the delightful symmetry between the novel and the object, though noting that ‘we’re unlikely to find that A/2017 U1 is as intriguing as Clarke’s mysterious starship bound for the Magellanics’ (see An Interstellar Visitor?). Still, an interstellar object entering the Solar System only to go careening back out of it could not help but recall Clarke, whose ‘asteroid’ 31/439 wound up being artificial. 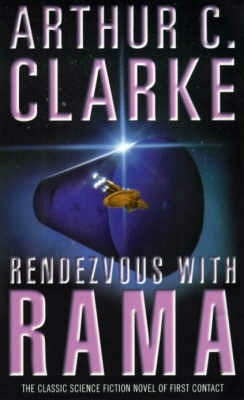 Then came the paper from Karen Meech (University of Hawaii Institute for Astronomy, where the object was first detected with the Pan-STARRS1 telescope). Drawing on data from telescopes around the world, Meech’s team has been able to characterize our first nearby object from another stellar system, with equally delightful results. For it turns out that ‘Oumuamua (pronounced oh MOO-uh MOO-uh) has an unusual axis ratio, being about ten times longer than it is wide. Jim Benford couldn’t resist suggesting I show a cover from Rendezvous with Rama depicting just such an axis ratio, and I agreed wholeheartedly.

Any science fiction fan familiar with Clarke (and are there any who aren’t?) will have fun with the similarities, but how much do we actually know about ‘Oumuamua? Meech’s team based its conclusions on the object’s shape on the fact that its brightness changed so dramatically as it rotated (spinning on its axis every 7.3 hours). Lance Benner, who specializes in radar imaging of near-Earth and main-belt asteroids at JPL, calls the axis ratio here ‘truly extraordinary.’ We know of no Solar System objects elongated more than 3 times longer than they are wide.

Nothing in our Solar System, in other words, quite matches an object shaped like this. Of course, it might also look like the image below, courtesy of the European Southern Observatory. 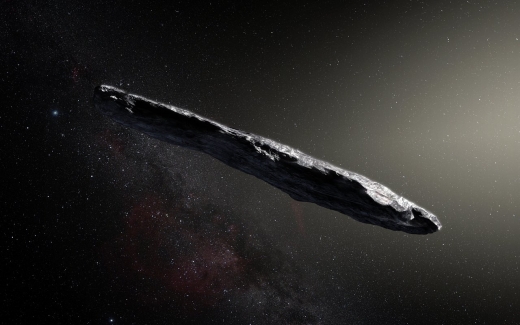 Image: This artist’s impression shows the first detected interstellar asteroid: `Oumuamua. This unique object was discovered on October 19, 2017 by the Pan-STARRS 1 telescope in Hawai`i. Subsequent observations from Gemini, ESO’s Very Large Telescope in Chile, CFHT, UKIRT, and other observatories around the world show that it was on a path which must have been travelling through interstellar space for millions of years before its chance encounter with our star system. `Oumuamua seems to be a dark red highly-elongated metallic or rocky object, about 400 meters long, and is unlike anything normally found in the Solar System. Credit: ESO/M. Kornmesser.

On the other hand, the object’s light curve, as examined through data from the Canada-France-Hawaii Telescope (CFHT), can show us rotation and likely axis ratio, but the overall observations — from the United Kingdom Infrared Telescope (UKIRT), the Keck Telescope on Mauna Kea, the Gemini South telescope, and the European Southern Observatory (ESO) Very Large Telescope (VLT) in Chile as well as CHFT — show similarities with local objects as well as differences. Here’s Karen Meech on those findings:

“While study of `Oumuamua’s colors shows that this body shares characteristics with both Kuiper Belt objects and organic-rich comets and trojan asteroids, its hyperbolic orbit says it comes from far beyond.”

The object’s dark red color is similar to Kuiper Belt objects, and the researchers believe it is dense and rocky or with high metal content, an asteroid that, according to this ESO news release, lacks significant amounts of water or ice, and one whose surface darkening and reddening is the result of millions of years of irradiation. Current length estimates are in the range of 400 meters.

So while its composition is similar to objects in our Solar System, its shape is unique and so, of course, is its origin. Observations of the object had to be quickly compiled, for while it was only 85 times the Earth-Moon distance away when discovery was announced earlier this month, it is moving away rapidly. It was clear to the discoverers that they had little time to gather data on this enigmatic visitor. Thus Gemini director Laura Ferrarese, who applied Gemini South’s resources to the study for Meech’s group: “Needless to say, we dropped everything so we could quickly point the Gemini telescopes at this object immediately after its discovery.”

Both Hubble and Spitzer are also tracking the object the week of November 20, according to JPL. And here’s another science fictional bit: Preliminary orbital calculations show `Oumuamua came from the approximate direction of Vega, in the constellation Lyra. That just might recall Carl Sagan’s novel Contact, where a SETI signal containing data is found to be coming from Vega, 26 light years away, leading to the construction of a most unusual device.

But there the similarities end: Our object is simply traveling too slow to have been sent from Vega, which would not have been nearby when `Oumuamua was there 300,000 years ago. 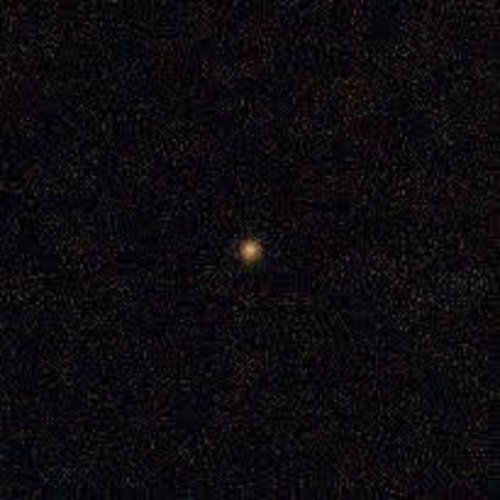 Image: This composite was produced by combining 192 images obtained through three visible and two near-infrared filters totaling 1.6 hours of integration on October 27 at the Gemini South telescope. Processing removes the background stars. The field of view represents a patch of sky 5,000 km on a side at the distance of `Oumuamua. Visible colors for the image were assigned to each filter as follows:
g (398-552 nm) = blue
r (562-692 nm) = green
i (706-850 nm) = yellow
z (830-925 nm) = orange
Y (970-1070 nm) = red
While assigning visible colors to filtered images is somewhat subjective, the resulting color of `Oumuamua in optical light is similar to the hue of some of the moons of outer planets in our Solar System, and possibly indicates a similar composition (a combination of minerals, carbon, iron, and organic compounds). Color composite produced by Travis Rector, University of Alaska Anchorage, using Gemini South GMOS data obtained and processed by Meech et. al. Credit: Gemini Observatory/AURA/NSF

Are we going to find more such visitors? Ejected comets and asteroids, forced into the deep through interactions with larger planets, may be relatively common. In fact, Robert Jedicke, who is part of the team working with Meech, estimates that a similar object, of similar size, is out there between the Earth and the Sun at any given time, up to perhaps 10 every year. If so, it will be surveys like Pan-STARRS and the future Large Synoptic Survey Telescope (LSST) that begin to compile statistics on the frequency of visitors like `Oumuamua.

`Oumuamua is now traveling at 38.3 kilometers per second relative to the Sun, about 200 million kilometers from Earth, and will pass the orbit of Jupiter in May of 2018, headed in the general direction of the constellation Pegasus. We should be able to continue to refine its trajectory as it leaves the Solar System through mid-December, when it becomes too faint to detect.

I am not saying this is going to happen, but wouldn’t it be fascinating if we learned it was headed toward another nearby star…

The paper is Meech et al., “A brief visit from a red and extremely elongated interstellar asteroid,” published online by Nature 20 November 2017 (abstract).

Previous post: ‘Dark Star’ and Staring into the Cosmic Abyss