TRAPPIST-1 and its seven interesting planets may be the most compelling stellar system we’re investigating, given the range of worlds here and the possibilities for analyzing an entire, nearby planetary system. But as we look toward examining systems like this with new space- and ground-based instruments, we may run into problems with searching for biosignatures. Both the TRAPPIST-1 planets and the promising Proxima Centauri b may be tough to characterize.

The problem: When searching for biosignatures, we’re looking for signs of metabolism, gases that are continually produced and remain out of balance in a planetary atmosphere. Ozone is one piece of the puzzle, one that signifies oxygen. Finding the latter in the same atmosphere with methane would be a compelling biosignature. But ozone could be hard to detect.

Ludmila Carone (Max Planck Institute for Astronomy) and colleagues now find that atmospheric circulation in planets close enough to red dwarfs to be in their habitable zone may mask the very signs we’re looking for. Ozone may become undetectable, trapped in equatorial regions.

The issue involves atmospheric flows, which will likely differ from what we see on Earth. The ozone in our stratosphere is formed when ultraviolet light from the Sun triggers chemical reactions in the oxygen molecules that make up approximately one-fifth of our atmosphere. The ozone protects us from harmful ultraviolet radiation from the Sun, and is distributed throughout the atmosphere owing to large-scale air flows moving from the equatorial regions to the poles. 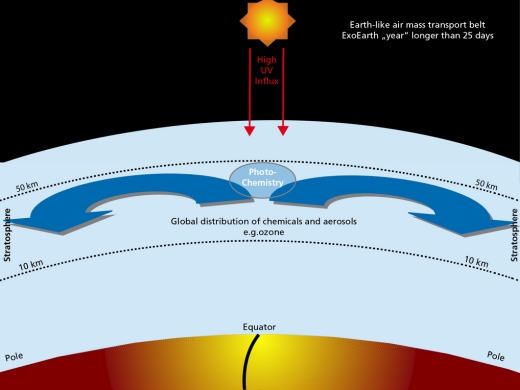 Image: Earth’s atmosphere has a “transportation belt” of air flows which move ozone from the main production areas near the equator towards the poles. This mechanism is important for creating Earth’s global ozone layer. Credit: MPIA (L. Carone & Graphics Dept.)

The problem for exoplanetology is that red dwarf planets in orbits of less than 25 days may be tidally locked to their star, presenting the same face to it at all times. Tidal lock, which we’ve examined often in these pages, could conceivably still allow enough heat to circulate to avoid the kind of extremes between dark and light sides that could prevent life from emerging. But for planets like these, Carone’s models show major air flows moving in the opposite direction, from the poles to the equator. The ozone we seek, then, could be trapped in the equatorial region. 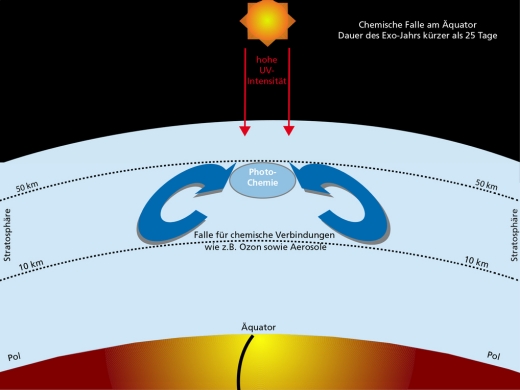 Image: As a new study by Ludmila Carone shows, certain exoplanets could have air flows that serve to trap ozone in the equatorial regions. This could present an unforeseen complication for the search for traces of life on these planets. For those who don’t speak German — my apologies, but I only have this image with German annotation. Credit: MPIA (L. Carone & Graphics Dept.)

This possibility is one we’ll need to consider as we begin the analysis of atmospheres on terrestrial-class planets around nearby red dwarfs. We may find no ozone on planets where ozone and oxygen might actually exist, though sequestered in places that might be difficult to detect. That’s a reverse take on the usual ‘false positive’ problem we’ve discussed here before, with abundant oxygen, for example, not necessarily being a marker for biological activity.

On the other hand, it’s worth asking whether a planet with ozone only in its equatorial regions would be capable of developing life in the first place. On that score, Carrone has an answer:

“In principle: yes. Proxima b and TRAPPIST-1d orbit red dwarfs, reddish stars that emit very little harmful UV-light to begin with. On the other hand, these stars can be very temperamental, and prone to violent outbursts of harmful radiation including UV. There is still a lot that we don’t know about these red dwarf stars. But I’m confident we will know much more in five years.”

True enough, assuming a successful launch of instruments like the James Webb Space Telescope, and the gradual emergence of the next generation of ground-based instruments. But as a marker for oxygen and potential life, exoplanet ozone may be a challenging detection.