Could plate tectonics occur on Europa? It’s an intriguing notion because the surface crust of the Saturnian moon offers oxidants and other chemicals useful for life. The process called subduction, in which a tectonic plate slides underneath another plate and sinks, would offer a way for these materials to come into contact with the subsurface ocean. We would have, in other words, a first-class mechanism for feeding the ocean with nutrients. 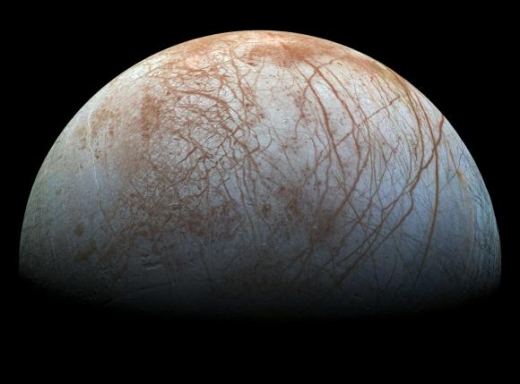 Image: Previous studies have hinted that something like subduction may have been happening on Jupiter’s moon, Europa. A new study provides geophysical evidence that it could indeed be happening on the moon’s icy shell. Credit: NASA/JPL-Caltech/SETI Institute.

There has been earlier evidence of possible plate tectonic activity on Europa, based on studies of surface geology. In places, the icy crust seems to be expanding, and here we can draw an analogy with mid-ocean ridges on Earth, which spread as a result of tectonic activity. In our oceans, material from the crust can sink into the mantle because it is cooler than the mantle material, and therefore denser. Negative buoyancy results, empowering subduction.

A temperature gradient could be in play on Europa. One line of thinking is that the ice shell on the moon is bi-layered, with the thin and cold outer layer atop a somewhat warmer layer of convective ice. Push colder ice from the surface into the warmer ice and it would sink until it warmed to the temperature of the ice around it. The image below illustrates how this might work, and is based on work that was done in 2014. 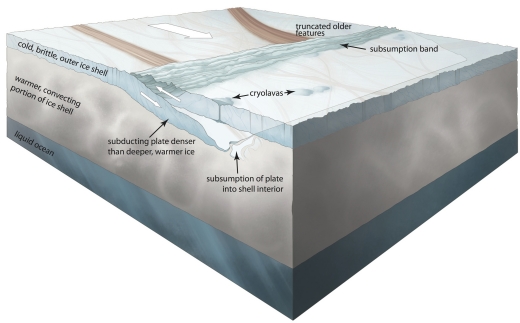 Image: A subduction model for Europa based on temperature, drawing on a 2014 paper by Simon Kattenhorn (University of Idaho) and Louise Prockter (JHU/APL), This conceptual illustration of the subduction process shows how a cold, brittle, outer portion of Europa’s 20-30 kilometer-thick ice shell moved into the warmer shell interior and was ultimately subsumed. A low-relief subsumption band was created at the surface in the overriding plate, alongside which cryolavas may have erupted. Credit: Noah Kroese, I.NK.

But a new study out of Brown University hints at another, perhaps more robust option. The work of Brandon Johnson, who developed it with the help of graduate students in a class on ocean worlds he was teaching, the paper looks at differences in salt content on Europa. The team’s computer modeling tracked the temperature and compacting of ice as it sinks into warmer ice below, analyzing density changes as warm ice becomes easier to compact. The temperature, salt content and level of ice compaction determine the buoyancy of the ice.

Johnson’s work shows that variations in salt content in Europa’s ice shell of no more than a few percent can cause subduction to occur. Moreover, we have several mechanisms for producing these variations in salt, with upwellings of water from the ocean — suggested by surface geology — offering similarities to magma rising from Earth’s mantle. This process, along with possible cryovolcanism, could deliver salty ocean water directly onto the surface.

Thus we have a mechanism for making salt variations global on Europa, and a process that can feed the ocean below with nutrients. If subduction is occuring on Europa, it would not necessarily be dependent on temperature differences. Or perhaps both processes are in play. In any case, Europa would be only the second place in the Solar System where plate tectonics occurs, and it would carry astrobiological implications. “If indeed there’s life in that ocean, subduction offers a way to supply the nutrients it would need,” Johnson says, and adds:

“It’s fascinating to think that we might have plate tectonics somewhere other than Earth. Thinking from the standpoint of comparative planetology, if we can now study plate tectonics in this very different place, it might be able to help us understand how plate tectonics got started on the Earth.”

The paper is Johnson et al., “Porosity and salt content determine if subduction can occur in Europa’s ice shell,” accepted at the Journal of Geophysical Research: Planets 4 December 2017 (abstract). The earlier Kattenhorn and Prockter paper is “Evidence for subduction in the ice shell of Europa,” Nature Geoscience 7 (2014), 762-767 (abstract).