A Second Super-Earth for K2-18

The transiting red dwarf K2-18 is about 111 light years out in the general direction of the constellation Leo, with a mass of 40 percent of Sol’s. A super-Earth, K2-18b, was detected here in 2015 through light curve analysis of data from the reconfigured Kepler K2 mission, and we now have the first measurement of the planet’s mass, drawing on radial velocity data from HARPS. The two planet detection methods in conjunction thus firm up our knowledge of a possible habitable zone planet.

But they also reveal, in the analysis of Ryan Cloutier (University of Toronto) and colleagues, a second super-Earth, K2-18c, which turns out to be non-transiting, and therefore non-coplanar with K2-18b. As we saw yesterday, HARPS (High Accuracy Radial Velocity Planet Searcher), is capable of drilling down to about one meter per second in the analysis of the stellar wobbles that radial velocity methods examine. The current data set gives us another interesting world while reminding us of the capabilities of the ESPRESSO spectrograph I talked about yesterday. 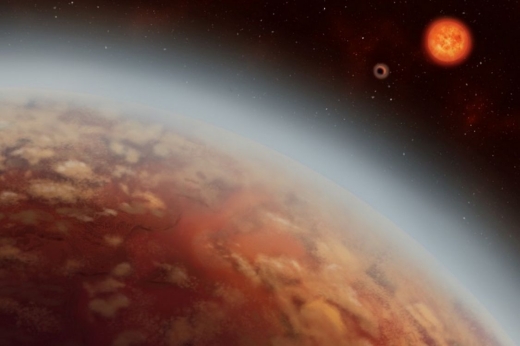 Image: An artist’s conception of planet K2-18b, its star K2-18 and the second planet K2-18c. Credit: Alex Boersma (www.alexboersma.com). Two things I like about this image: Its evocative feel, an imaginative take on a world whose actual conditions are speculative, and the fact that the artist is given credit by the Université de Montréal Institute for research on exoplanets (iREx). Artists should always get credit but all too often do not in press materials.

When it came to K2-18b, the challenge was to figure out whether the planet was a gaseous mini-Neptune or a predominately rocky world. Hence the importance of the radial velocity measurements, giving us in combination with earlier transit data a tentative mass as well as a radius, allowing the planet’s density to be inferred. The researchers believe K2-18b is either a large, rocky planet with a small gaseous atmosphere or a water planet with an ice crust. The range is explained by the uncertainty in the measured mass, which the paper cites at 24%.

It’s interesting to note that this planet’s mass is close to that of another possible habitable zone planet, LHS 1140b, though the dissimilarities are also striking:

K2-18b is of a similar mass to the habitable zone planet LHS 1140b (Dittmann et al. 2017) and receives a comparable level of insolation despite being ∼ 1.6 times larger than LHS 1140b. Analyzing the mass-radius relationship of these small planets over a range of equilibrium temperatures is a critical step towards understanding which of these systems have retained significant atmospheric content thus making them more suitable to extraterrestrial life.

Given the inability to distinguish between the two outcomes, we have to look to future instruments, like the upcoming James Webb Space Telescope. Cloutier points out that JWST should be able to probe the atmosphere of K2-18b to make the call. We keep bumping up against this ceiling as we wait for new instruments to come online. A nearby transiting world, this planet should climb toward the top of the target list for atmospheric analysis. K2-18 is now the second brightest M dwarf with a transiting habitable zone planet behind LHS 1140.

On JWST, by the way, be sure to read the always reliable Lee Billings’ article What Will NASA’s Biggest-Ever Space Telescope Study First? for a look at the inevitable prioritization of observing time and also the potential of the space telescope. A quick bit from the essay:

Unlike Kepler, which simply surveyed a single star-packed field of view for transits, Webb can zoom in on individual transiting worlds for deeper study. Astronomers should be able to use it to detect water vapor, methane, carbon dioxide and other gases in some silhouetted planets’ upper atmospheres by monitoring the starlight streaming through. They could also record a planet’s passage in front of and then behind its star, using the difference between the two observations to crudely measure a world’s temperature, weather patterns and clouds. “Webb is going to be great for exoplanets,” says Kepler project scientist Natalie Batalha, an astronomer at NASA Ames Research Center who leads the most time-intensive ERS program, which will use nearly 80 hours of Webb’s time to study transiting worlds. “It’s just that this is a difficult game to play, because the signals we’re looking for are really tiny. Seen [in transit] from another star, Venus blocks one part per ten-thousandth of the sun’s light, and its atmosphere intercepts one two-hundredth of that. It’s tough to see—you need a big mirror and great instrumentation to do it.”

As to newly detected K2-18c, the researchers looked for but did not find significant transit timing variations (TTV) in the K2 data. The Cloutier paper continues:

The orbit of the newly discovered K2-18c lies interior to that of K2-18b and yet the planet is non-transiting. This implies that the orbital planes of the planets are mutually inclined. In order for K2-18c to not be seen in-transit the planetary system requires a mutual inclination of just ≿ 1.4° which is consistent with the observed distribution of mutually inclined multi-planet systems (Figueira et al. 2012; Fabrycky et al. 2014).

The team’s dynamical simulations show that the oscillation timescale of the planets’ orbital inclinations is in the range of 106 years, meaning that it may be a long time before K2-18c can be seen in a transit from Earth. And the authors believe that finding the second planet through radial velocity data emphasizes the prevalence of Earth- to super-Earth size planets in M-dwarf systems, with multi-planet systems offering potential insights into planet formation processes around M-dwarfs. Comparative planetology here we come.

The paper is Cloutier et al., “Characterization of the K2-18 multi-planetary system with HARPS: A habitable zone super-Earth and discovery of a second, warm super-Earth on a non-coplanar orbit,” submitted to Astronomy & Astrophysics (preprint).