Keeping Up with Juno

We’re getting interesting results from analysis of Juno’s close flybys of Jupiter. The spacecraft has detected hydrogen, oxygen and sulfur ions moving at relativistic speeds in a new radiation zone just outside the atmosphere. We have its JEDI (Jupiter Energetic Particle Detector Instrument) to thank for the detection, which was made during approaches as close as 3400 kilometers from the cloud tops. Fast moving atoms without an electric charge — energetic neutral atoms — are thought to be the source of the new radiation zone as they move from gas around Io and Europa and become ionized in Jupiter’s upper atmosphere.

The new radiation zone is inside Jupiter’s previously known radiation belts, which have also been under scrutiny by Juno. High-energy, heavy ions have been detected in the inner edges of the planet’s electron radiation belt, previously thought to be made up primarily of electrons moving at near light speed. The heavy ions show up at high latitude locations within the electron belt, detected by Juno’s Stellar Reference Unit (SRU-1) star camera. You can see the locations where they were detected in the bright spots along the white line of Juno’s flight path below.

“The closer you get to Jupiter, the weirder it gets,” said Heidi Becker, Juno’s radiation monitoring investigation lead at JPL. “We knew the radiation would probably surprise us, but we didn’t think we’d find a new radiation zone that close to the planet. We only found it because Juno’s unique orbit around Jupiter allows it to get really close to the cloud tops during science collection flybys, and we literally flew through it.” 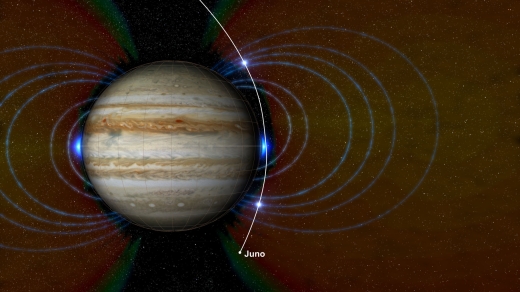 Image: This graphic shows a new radiation zone surrounding Jupiter, located just above the atmosphere near the equator, that has been discovered by NASA’s Juno mission. The new radiation zone is depicted here as a glowing blue area around the planet’s middle. Credit: NASA/JPL-Caltech/SwRI/JHUAPL.

Meanwhile, Juno’s microwave radiometer (MWR) instrument also culled data during Juno’s passage over the Great Red Spot in July of 2017. The figure below represents six channels of these data. Using the MWR, Juno can see deeper than any previous ground- or space-based observations into the clouds. It’s interesting to note that the large-scale structure of the Great Red Spot is evident as deep into the planet as the MWR can observe. 16,000 kilometers wide, the Great Red Spot is a vast crimson storm that has been monitored since 1830. It was twice Earth’s diameter when the Voyagers studied it but has since diminished in width. 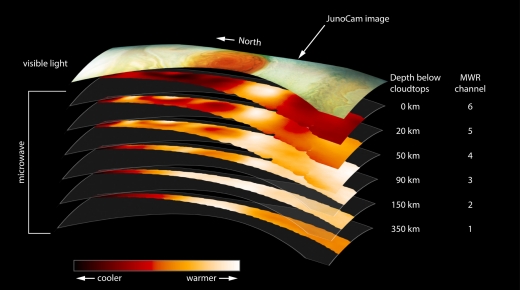 Image: This figure shows data from the six channels of the microwave radiometer (MWR) instrument onboard NASA’s Juno spacecraft. The data were collected in the mission’s sixth science orbit (referred to as “perijove 7”), during which the spacecraft passed over Jupiter’s Great Red Spot. The top layer in the figure is a visible light image from the mission’s JunoCam instrument, provided for context. Credit: NASA/JPL-Caltech/SwRI.

“Juno found that the Great Red Spot’s roots go 50 to 100 times deeper than Earth’s oceans and are warmer at the base than they are at the top,” said Andy Ingersoll, professor of planetary science at Caltech and a Juno co-investigator. “Winds are associated with differences in temperature, and the warmth of the spot’s base explains the ferocious winds we see at the top of the atmosphere.”

But below is the image that awakens the science fiction fan in me. It’s an animation assembled from JunoCam imagery to give us a sense of the winds in the Great Red Spot, using a velocity field model derived from earlier observations including those from Voyager. The animation is the work of two citizen scientists, Gerald Eichstädt and Justin Cowart, with Juno scientists Shawn Ewald and Andrew Ingersoll applying the velocity data to produce the finished animation.

Image: Winds around Jupiter’s Great Red Spot are simulated in this JunoCam view that has been animated using a model of the winds there. The wind model, called a velocity field, was derived from data collected by NASA’s Voyager spacecraft and Earth-based telescopes. NASA’s Juno spacecraft acquired the original, static view during passage over the spot on July 10, 2017. Credit: NASA/JPL-Caltech/SwRI/MSSS/Gerald Eichstadt/Justin Cowart.

If you’d like to dig into the analysis of radiation data, the paper is Kollman et al., “A heavy ion and proton radiation belt inside of Jupiter’s rings,” Geophys. Res. Lett 44, 5259-5268 (abstract).