MU69: New Horizons and its Target

We’re just a little more than a year away from New Horizons’ encounter with Kuiper Belt Object MU69. The spacecraft has now made its last trajectory correction of the cruise phase of its journey, following the 2015 flyby of Pluto/Charon, an adjustment performed to optimize science at destination. Both the Hubble instrument and the European Space Agency’s Gaia mission have supplied data that is now being used to tighten the parameters of the trajectory. Another course correction is possible in October of 2018 during the MU69 approach phase.

This update from JHU/APL tells us that closest approach is now scheduled for 0533 UTC, or 0033 EST on January 1, 2019, which should give many New Year’s partygoers something extra to stay up for. The course adjustment was performed to optimize visibility for the antennae of the Deep Space Network, which will reflect radar waves off the surface of MU69 in an experiment that, if successful, will help determine the reflectivity of its surface.

The 2.5-minute engine burn on December 9 thus sets a record for the farthest spacecraft course correction ever performed, at a distance of 6.1 billion kilometers. At this distance, radio confirmation took 5 hours and 41 minutes. The course was adjusted by approximately 151 centimeters per second, setting up a planned flyby distance of 3500 kilometers. New Horizons goes back into hibernation mode on December 21 and will remain in that mode until June.

Learning About the Target

Meanwhile, the occultation events of last June and July, which saw teams setting up telescopes in the shadow of the KBO as it passed in front of a star, have proved invaluable at assessing the shape of MU69, particularly the July 17 occultation, which produced information on the object’s size, shape and orbital characteristics. But it was data gathered by the Stratospheric Observatory for Infrared Astronomy (SOFIA) on July 10 that may be the most provocative, showing an abnormality in the occultation that could indicate a small moon. 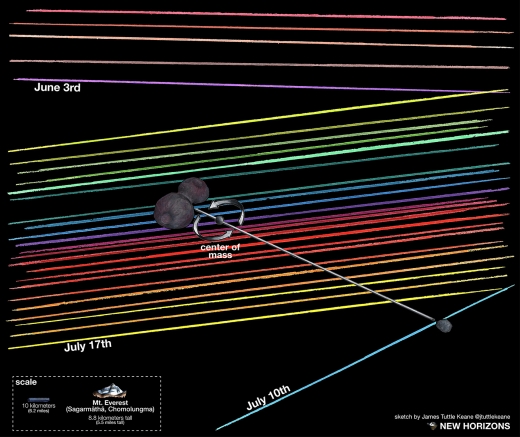 Image: On three occasions in June and July 2017, New Horizons mission team members attempted to track a small, distant Kuiper Belt object, 2014 MU69, as it passed in front of a star – an event known as an occultation. The colored lines mark the path of the star as seen from different telescopes on each day; the blank spaces on those lines indicate the few seconds when MU69 blocked the light from the star. Scientists are using these observations to craft a picture of MU69 and any companion bodies. (Credit: NASA/Johns Hopkins University Applied Physics Laboratory/Southwest Research Institute/James Tuttle Keane).

Marc Buie (SwRI), a member of the New Horizons science team, updated the analysis of the MU69 occultations at the American Geophysical Union fall meeting in New Orleans.

“We really won’t know what MU69 looks like until we fly past it, or even gain a full understanding of it until after the encounter,” said Buie. “But even from afar, the more we examine it, the more interesting and amazing this little world becomes… A binary with a smaller moon might also help explain the shifts we see in the position of MU69 during these various occultations. It’s all very suggestive, but another step in our work to get a clear picture of MU69 before New Horizons flies by, just over a year from now.”

What we do know at this point is that MU69 is more than 6.5 billion kilometers from Earth and no more than 30 kilometers long if a single object, or if it is a binary, then each component is roughly 15-20 kilometers in diameter. Scientists are hopeful that the flyby will give us information about the earliest era of planet formation in the outer Solar System. In any case, the more we learn about it, the more intriguing this clearly worthwhile target becomes.

“The occultation effort that Marc Buie and his team led for New Horizons has been invaluable in opening our eyes to the very real possibilities that MU69 is both a lot more complex than anyone suspected, and that it holds many surprises for us at flyby on New Year’s Eve and New Year’s Day, 2019,” added New Horizons principal investigator Alan Stern, also from Southwest Research Institute. “The allure of its exploration is becoming stronger and stronger as we learn more and more about it. It’s just fantastic!”

As the mission continues, you can keep up with New Horizons’ position here.