Until we can start observing the atmospheres of rocky worlds around red dwarf stars, we’re left to extrapolate conditions there as best we can. New work discussed at the fall meeting of the American Geophysical Union on Dec. 13 recounts one such attempt, using the planet Mars as a surrogate for a similar world in habitable zone orbit around an M-dwarf. The work draws on data from the MAVEN (Mars Atmosphere and Volatile Evolution) mission, launched in 2013 and now orbiting the Red Planet. Designed to study the deterioration of its atmosphere over time, MAVEN offers insights into exoplanets that are derived from plugging in different stellar values. 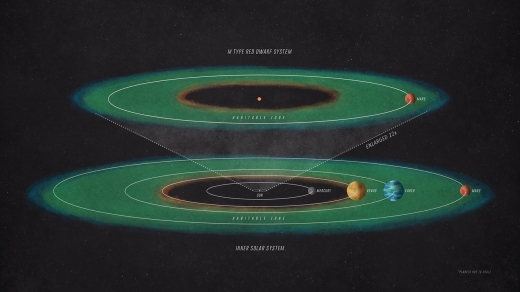 Image: To receive the same amount of starlight as Mars receives from our Sun, a planet orbiting an M-type red dwarf would have to be positioned much closer to its star than Mercury is to the Sun. Credit: NASA/GSFC.

MAVEN co-investigator David Brain (University of Colorado, Boulder) discussed MAVEN data at the meeting, noting that the planet has lost the bulk of its atmosphere to space through a combination of physical and chemical factors. Aiding the study have been periods of higher and lower solar activity, which have subjected Mars to solar storms, solar flares and coronal mass ejections (CMEs). The processes of atmospheric escape in play led to Brain and team’s calculations on a similar planet positioned at the edge of the habitable zone of a red dwarf.

The results: The tight orbit a planet would need to occupy to be in the habitable zone of a red dwarf would place it much closer to its star than Mercury is to the Sun. Extreme ultraviolet from the host would subject the planet to 5 to 10 times more UV radiation than Mars currently receives. According to the calculations, such a world would lose 3 to 5 times as many charged particles as Mars does in our system, through a process known as ion escape.

But ion escape is only one way to degrade a planetary atmosphere. Photochemical escape refers to the loss of neutral particles when ultraviolet radiation breaks down molecules in the upper atmosphere. The researchers found that this process is 5 to 10 times more effective in the red dwarf scenario, leading to the creation of charged particles that cause ‘sputtering’, where energetic particles are accelerated and create molecular collisions. 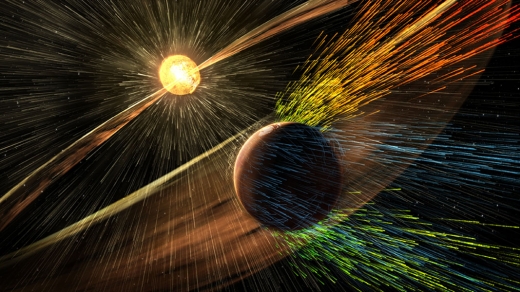 Image: This illustration depicts charged particles from a solar storm stripping away charged particles of Mars’ atmosphere, one of the processes of Martian atmosphere loss studied by NASA’s MAVEN mission, beginning in 2014. Unlike Earth, Mars lacks a global magnetic field that could deflect charged particles emanating from the Sun. Credit: NASA/GSFC.

We wind up with a depressing scenario for habitability, with even a quiet M-class dwarf shortening the habitable period of the planet by a factor as high as 20. A more active M-dwarf, according to this JPL news release, would shorten habitability by a factor of 1,000. The period during which life could arise is drastically shortened and still at the mercy of stellar storms.

But while the researchers see serious habitability issues for a Mars-class planet in this scenario, they point out that a planet with active geology could find its atmosphere replenished, while one with a magnetic field could be shielded to some extent from the effects of the stellar wind. A world of larger size than Mars would also have a larger gravitational field, allowing it to hold on to more of its atmosphere. Mars-like planets, then, are not candidates for habitable conditions even in a red dwarf habitable zone, but different kinds of planets may fare better.