Any thought that our Solar System offers a template for other stellar systems has pretty much vanished in the panoply of system architectures now exposed to our observation. But it seemed rational, in the days before we knew of the existence of other systems, to imagine that if they were there, they would be more or less well ordered. Planets presumably orbited in the equatorial plane of their star, all more or less co-planar (and if Pluto didn’t quite fit the bill, that was just more evidence of the features that would one day cause it to become a ‘dwarf planet’).

But looking at the eight planets that remained after Pluto’s ‘demotion,’ we see planets that are co-planar within about 7 degrees of difference. And as Ethan Siegel (Lewis & Clark College) points out, if we take Mercury out of the mix, the deviation from the plane is only about two degrees (Mercury’s inclination is 7 degrees). Likewise, planets in our system line up well with the Sun’s rotation axis. But some systems deviate far from this expected scenario.

This morning in Nature we learn more about the GJ 436 system, a red dwarf already in the public eye because GJ 436b, a transiting ‘hot Neptune,’ has an atmosphere that is evaporating, producing a cloud around the planet itself and a long tail — indeed, GJ 436 has been nicknamed ‘the hairy planet,’ one that evaporates like a comet. 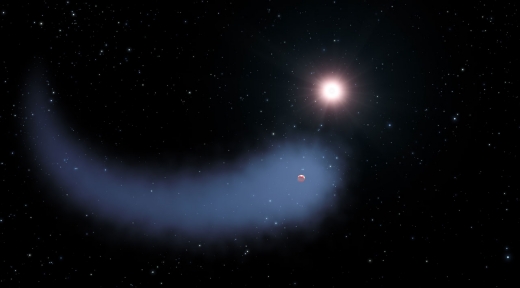 Image: This artist’s concept shows the enormous comet-like cloud of hydrogen bleeding off of the Neptune-sized planet GJ 436b just 30 light-years from Earth. Also depicted is the parent star, which is a faint red dwarf named GJ 436. The hydrogen is evaporating from the planet due to extreme radiation from the star. A phenomenon this large has never before been seen around any exoplanet. Credit: NASA, ESA, and G. Bacon (STScI).

This is a transiting world, so we have been able to determine both mass and radius — the planet is a bit more massive than Neptune, and about 5,000 kilometers larger in diameter. It orbits its host at some 4 million kilometers, fully 15 times closer than Mercury.

Now we learn that researchers at the University of Geneva (UNIGE) have determined that GJ 436b is in a polar orbit. In other words, rather than following in the equatorial plane, it passes above the poles of its star. Moreover, the orbit is eccentric to a degree that, given its proximity to the primary, is likewise unusual. UNIGE’s Vincent Bourrier is first author of the study:

“This planet is under enormous tidal forces because it is incredibly close to its star, barely 3% of the Earth-Sun distance. The star is a red dwarf whose lifespan is very long; the tidal forces it induces should have since circularized the orbit of the planet, but this is not the case!” 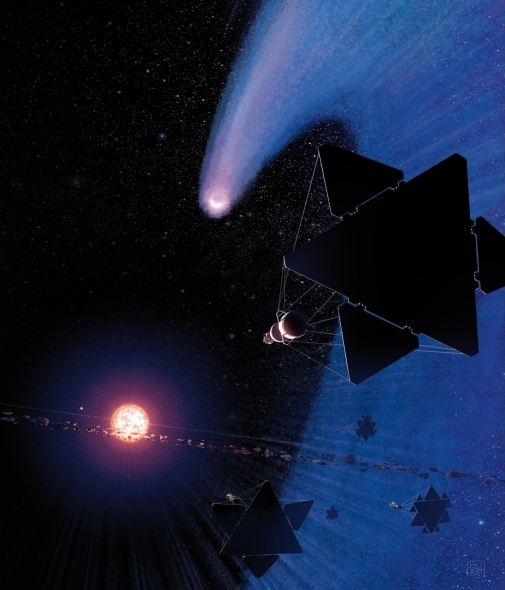 Image: A science fictional look at the GJ 436 system showing a stellar regatta. Space boaters parked in the equatorial plane of the star wait for the ‘hairy’ planet to emerge from this plane to “ride” the planetary wind with the help of kite-surfing vessels. As they rise above the poles of the star, they obtain a breathtaking view of the entire planetary system and can glimpse the mysterious disruptive planet, which appears as a bright spot in the background. Credit: Denis Bajram/UNIGE.

We’re reminded that the architecture of planetary systems preserves the history of their formation, if we can put together the clues. In this case, explaining an orbital scenario can itself become a tool for exoplanet discovery. For the new work ties in with earlier studies of a possible second planet, GJ 436c, around this star. The discovery was announced in 2008 but subsequently retracted, although the possibility of a second world here remained open.

The unusual orbit of GJ 436b now renders the presence of a more massive and distant second planet more likely. Planetary migration may be the cause of GJ 436b’s tight orbit. “Our next goal,” says Bourrier, “is to identify the mysterious planet that has upset this planetary system.”

Full citation when I have it. See also Bourrier et al., “An evaporating planet in the wind: Stellar wind interactions with the radiatively braked exosphere of GJ 436 b,” Astronomy & Astrophysics Vol. 591 (2016), A121 (full text).

Next post: What We Can Rule Out at Alpha Centauri