What We Can Rule Out at Alpha Centauri

One of the reasons to pay attention to spectrograph technologies — and we recently talked about ESPRESSO, which has just achieved ‘first light’ — is that we’re reaching the inflection point when it comes to certain key observations. Finding planets around Centauri A and B has been the gold standard for a number of researchers, and as Debra Fischer (Yale University) points out, we’re just now getting to where spectrographic technology is up to the challenge.

Chile is where much of the action is. Here we find ESPRESSO installed on the European Southern Observatory’s Very Large Telescope at Paranal. But Fischer’s team has built CHIRON at Cerro Tololo, and the paper likewise relies on data from the Geneva team’s HARPS and the UVES installation at the Very Large Telescope Array in the United States. Working with Yale’s Lily Zhao, Fischer has re-examined older data with an eye toward turning once again to Centauri A and B with a new round of observations beginning the year after next.

The scientist seems quite optimistic, and not just about the technology. In a Yale University news release she says: “Because Alpha Centauri is so close, it is our first stop outside our solar system. There’s almost certain to be small, rocky planets around Alpha Centauri A and B.”

Let’s dig into that assertion a bit. We’ve proceeded at Centauri A and B just as we did at Proxima Centauri, beginning with observations that allowed us to drill down progressively into the possible planet populations there. For a long time, it has been possible to say that no super-Earths larger than 8.5 Earth masses could be detected around Proxima in orbits with a period of 100 days (this was from work by Michael Endl and Martin Kürster). The same work showed that no super-Earths of 2-3 Earth masses could be found in the Proxima habitable zone.

But by pushing to ever more exacting observations, Guillem Anglada‐Escudé and team eventually discovered Proxima Centauri b, and now we are on the hunt for further planets there. In the close binary Centauri A and B system, Debra Fischer’s team can do something similar. Their new paper, looking at possibilities in the respective stars’ habitable zones, finds no evidence for planets at Centauri A larger than about 50 Earth masses. At Centauri B, we find no planets larger than about eight Earth masses. That leaves a lot of room for planets of that interesting small, rocky description that, in size at least, remind us of our own. 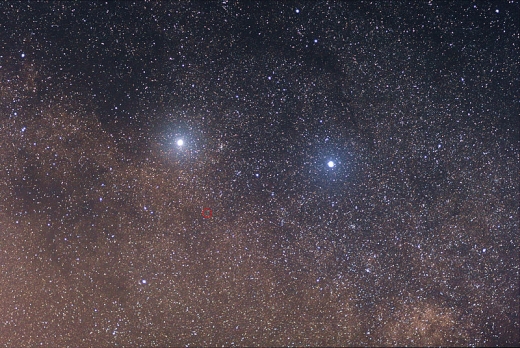 Image: The two bright stars are (left) Alpha Centauri and (right) Beta Centauri. The faint red star in the center of the red circle is Proxima Centauri. Here I always pause to remind people that Beta Centauri is an entirely different star, not part of Alpha Centauri. The stars we know as Centauri A and B are both within the glare of what appears to be the single ‘star’ on the left. The star Beta Centauri is actually in the range of 400 light years from us — don’t confuse it with Centauri B. This image was taken with a Canon 85mm f/1.8 lens with 11 frames stacked, each frame exposed 30 seconds. Credit: Skatebiker at English Wikipedia.

Radial velocity work, looking for the faint back-and-forth motion of a star as it is affected by the gravitational forces of orbiting planets, demands patient and time-consuming analysis. Fischer, Zhao and colleagues used more than a decade of radial velocity measurements for Centauri A and B as well as Proxima, drawing on CHIRON, UVES and HARPS data and using simulated signals to assess the probability that the signal could have been produced by stellar noise alone. The paper shows the lengths to which they went to screen for systematic errors as well.

This gets intriguing, for we know that with radial velocity, a key issue is that we cannot obtain a true planetary mass, but rather a range of masses with a minimum established — this is the result of the fact that in most cases, we cannot know the inclination of the planetary system, so what might appear to be a relatively small planet at minimum could also be much larger.

At Alpha Centauri, though, other factors come into play. Here, the dynamical influences of the binary system mean, according to Zhao and Fischer, that any stable planets are most likely co-planar, or nearly so, with the 79 degree inclination of the stellar binary system. In that case we can derive from radial velocity data a figure that is approximately the actual planet mass for any planets we do find around Centauri A and B. The work demonstrates that terrestrial class worlds could still exist around Centauri A or B and would not have been detected by the past ten years of precision radial velocity searches. The idea that we could find Earth-sized planets using radial velocity methods is still robust, and that includes for searches inside the habitable zone.

Here are the specifics of the result:

At each point in the parameter space of M sin i and orbital period, we sample a Keplerian signal at the actual time of the observations with added white noise scaled to the errors to provide a baseline of planet detection space. These simulations exclude planets within the conservative habitable zone of each planet with a M sin i of greater than 53 M⊕ for α Cen A, 8.4 M⊕ for α Cen B, and 0.47 M⊕ for Proxima Centauri on average. This result for α Cen B comes from the HARPS data set; the CHIRON data set excludes planets in the habitable zone of α Cen B to greater than 23.5 M⊕.

Note that finding on Proxima Centauri, which tells us that there could be planets orbiting there that are less than one-half of Earth’s mass. We have a great deal to learn about planet possibilities around all three stars. Note, too, how this work picks up another theme we’ve looked at recently, the use of existing datasets to draw new conclusions. As to future work, the paper gives us the roadmap: We will need radial velocity precision in the 10 centimeters per second space before we can detect the smaller planets that may lurk around Centauri A and B.

Bear in mind that work on Centauri A and B is currently tricky thanks to the small separation of the two stars as seen from Earth. That angular separation is now increasing, and the authors believe that the two stars will be ‘ideal targets’ for renewed radial velocity study by 2019. Adds Fischer: “The precision of our instruments hasn’t been good enough, until now.”