To understand why Beta Pictoris is receiving so much attention among astronomers, particularly those specializing in exoplanets, you have only to consider a few parameters. This is a young star, perhaps 25 million years old, one with a well observed circumstellar disk, the first actually imaged around another star. We not only have a large gas giant in orbit here, but also evidence of cometary activity as seen in spectral data. β Pic is also relatively nearby at 64 light years. 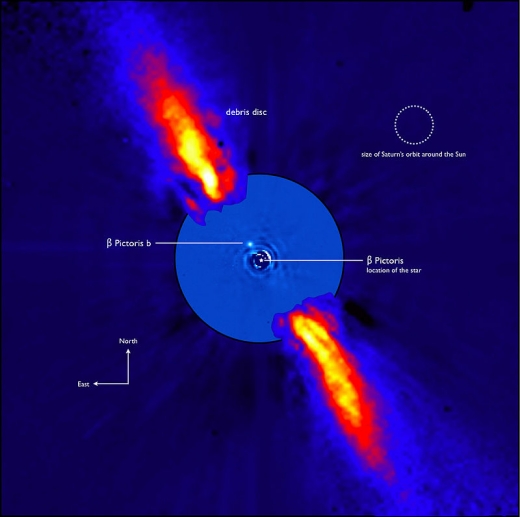 Image: This composite image represents the close environment of Beta Pictoris as seen in near infrared light. This very faint environment is revealed after a careful subtraction of the much brighter stellar halo. The outer part of the image shows the reflected light on the dust disc, as observed in 1996 with the ADONIS instrument on ESO’s 3.6 m telescope; the inner part is the innermost part of the system, as seen at 3.6 microns with NACO on the Very Large Telescope. The newly detected source is more than 1000 times fainter than Beta Pictoris and aligned with the disc. Both parts of the image were obtained on ESO telescopes equipped with adaptive optics. Credit: ESO/A.-M. Lagrange et al.

Consider this star, then, a conveniently close laboratory for the study of how stellar systems form. β Pic b, about seven times as massive as Jupiter, was discovered in 2009 by a French team led by Anne-Marie Lagrange (CNRS/Université Grenoble Alpes). The planet orbits at 1.5 billion kilometers, roughly the distance of Saturn from our Sun, but there is also the possibility of other planets now in formation within the debris disk. Indeed, the observed structure of planetesimal belts here is a possible indication of smaller planets we have not yet observed.

While β Pic b was discovered by direct imaging, there are interesting transit possibilities that are now being explored by scientists at the Paris Observatory and the Centre National De La Recherche Scientifique (CNRS). With launch scheduled for tomorrow, PicSat is a nanosatellite built on a CubeSat platform, one containing a 5 cm telescope destined for the study of β Pic. PicSat will use no more than 5 watts of power in the attempt to view a transit of β Pic b.

We don’t have a firm idea of exactly when the transit will occur, but scientists with the project peg any time between now and the summer of this year. A transit here would last only a few hours, but it would give us information about the size of the planet, the extent of its atmosphere and its chemical composition. The beginning of a transit will trigger an alert to the 3.6 meter telescope at the European Southern Observatory’s La Silla site, where the HARPS (High Accuracy Radial velocity Planet Searcher) spectrograph can be used to study the event.

Keeping a continuous eye on β Pic to spot the beginning of the transit is thus an imperative. Transits are expected to occur only every 18 years, and indeed PicSat was designed and constructed in just three short years. Modular methodologies to the rescue as we are reminded once again that simple resources like CubeSats are capable of world-class science.

Launch is scheduled for 12 January at 0358 UTC (2258 EST) aboard an Indian PSLV launcher, with the satellite inserted into a polar orbit at an altitude of 505 kilometers, a tandem launch that will include some thirty other satellites. While the satellite will be operated from Meudon in France, a facility of the Paris Observatory, PicSat uses radio amateur bands for communication.

Citizen scientists therefore take note: The PicSat team is opening the door for radio amateurs worldwise to collaborate in tracking the satellite, receiving data and relaying them to the PicSat database over the Internet. Have a look at the PicSat website for information on how to register to become part of this ad hoc radio network and follow PicSat updates. The site has been down this morning, presumably because of last minute updates, but keep checking.

Achieving great things with small packages is becoming part of our culture, and we can wish French space agency CNES and PicSat a safe launch as it begins its one year mission. The launch will be covered live here and you can keep up with PicSat events at https://twitter.com/IamPicSat, or check out its YouTube channel.

Next post: SETI and Astrobiology: Toward a Unified Strategy