Although I carry on about upcoming observatories on the ground and in space, I never want to ignore the continuing contribution of the Hubble telescope to our understanding of planet and star formation. As witness the latest deep survey made by team lead Massimo Robberto (Space Telescope Institute) and colleagues, which used the instrument to study small, faint objects in the Orion Nebula. At a relatively close 1,350 light years from Sol, the nebula is something of a proving ground for star formation, and now one that is yielding data on small stars indeed. 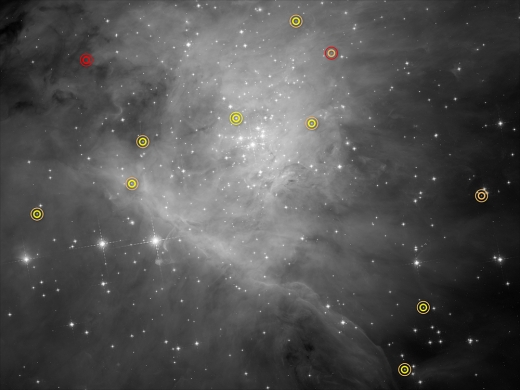 Image: This image is part of a Hubble Space Telescope survey for low-mass stars, brown dwarfs, and planets in the Orion Nebula. Each symbol identifies a pair of objects, which can be seen in the symbol’s center as a single dot of light. Special image processing techniques were used to separate the starlight into a pair of objects. The thicker inner circle represents the primary body, and the thinner outer circle indicates the companion. The circles are color-coded: Red for a planet; orange for a brown dwarf; and yellow for a star. Located in the upper left corner is a planet-planet pair in the absence of a parent star. In the middle of the right side is a pair of brown dwarfs. The portion of the Orion Nebula measures roughly 4 by 3 light-years. Credit: NASA , ESA, and G. Strampelli (STScI).

How to separate brown dwarf candidates from small red dwarfs? The technique in play was identification of water vapor in their atmospheres, which can peg cool red dwarfs as well, according to this Space Telescope Science Institute news release:

“These are so cold that water vapor forms,” explained Robberto. “Water is a signature of substellar objects. It’s an amazing and very clear mark. As the masses get smaller, the stars become redder and fainter, and you need to view them in the infrared. And in infrared light, the most prominent feature is water.”

The free-floating brown dwarfs and planets within the Orion Nebula are all new discoveries, a tribute to Hubble’s continuing role in astrophysical discovery. The search for binary companions to the 1,200 candidate stars in the original sample relied on high-contrast imaging techniques developed at STScI by Laurent Pueyo. The presence of water vapor in the atmospheres of the candidate companions is evidence that they are not the result of a chance alignment with background stars but rather must be brown dwarfs or exoplanet companions. Says Pueyo:

“We experimented with a method, high-contrast imaging post processing, that astronomers have been relying on for years. We usually use it to look for very faint planets in the close vicinity of nearby stars, by painstakingly observing them one by one. This time around, we decided to combine our algorithms with the ultra-stability of Hubble to inspect the vicinity of hundreds of very young stars in every single exposure obtained by the Orion survey. It turns out that even if we do not reach the deepest sensitivity for a single star, the sheer volume of our sample allowed us to obtain an unprecedented statistical snapshot of young exoplanets and brown dwarf companions in Orion.”

What other discoveries are waiting to be made in the Hubble archive? That data trove is soon to be complemented with the launch of the James Webb Space Telescope next year, an observatory designed to operate at infrared wavelengths.

Meanwhile, we have an early sample of low-mass objects early in the formation process, some of them solitary stars or brown dwarfs, others companions to other objects. Watching the formation process here may provide helpful insights into the boundary between star and planet as they evolve in such stellar nurseries.