Cassini’s huge dataset will yield discoveries for many years, as witness the global topographical map of Titan that has been assembled by Cornell University astronomers. The map draws on topographical data of the moon from multiple sources by way of studying its terrain and the flow of its surface liquids. Bear in mind that only 9 percent of Titan has been observed at relatively high resolution, and another 25-30 percent at lower resolution. For the remainder, the team mapped the surface using an interpolation algorithm and a global minimization process described in the first of two papers in Geophysical Review Letters.

The methods are complex and described in detail in the paper. For our purposes, let’s look at the result:

We present updated topographic and spherical harmonic maps of Titan making use of the complete Cassini RADAR data set for use by the scientific community. These maps improve on previous efforts (Lorenz et al., 2013; Mitri et al., 2014) through their increased coverage, higher resolutions, a global minimization of the data, and incorporation of observational errors, with the intent to serve a broader range of studies within the Titan community.

What stands out here are new mountains, none of them higher than 700 meters, and a global view of Titan’s topography that confirms that two locations in the equatorial region are depressions, a sign of cryovolcanic flows or, perhaps, ancient, now dried seas. There is also an implication that Titan’s crust may be more variable in thickness than previously believed, for the map shows a flatter (more oblate) Titan than our view up until now has suggested.

Three significant results emerge in the second of the two papers. We learn that Titan’s three seas share a common equipotential surface; i.e., a sea level. Although Titan’s seas are filled with hydrocarbons instead of water and are surrounded with a water ice bedrock, they do, just like Earth’s oceans, follow a constant elevation relative to Titan’s gravitational pull. Put another way, the oceans on Titan are all at the same elevation, the result of either flow through the subsurface between them or actual channels between the seas allowing liquid flow. 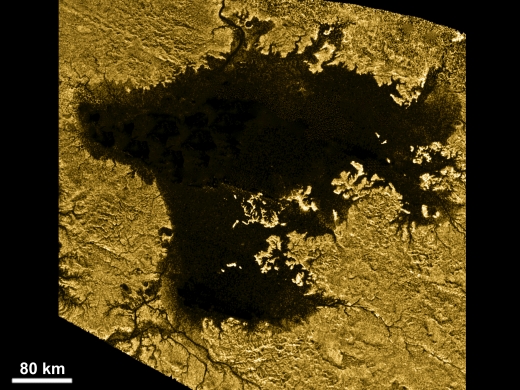 Image: Ligeia Mare, shown here in a false-color image from NASA’s Cassini mission, is the second largest known body of liquid on Saturn’s moon Titan. It is filled with liquid hydrocarbons, such as ethane and methane, and is one of the many seas and lakes that bejewel Titan’s north polar region. Credit: NASA/JPL-Caltech/ASI/Cornell.

“We’re measuring the elevation of a liquid surface on another body 10 astronomical units away from the sun to an accuracy of roughly 40 centimeters. Because we have such amazing accuracy we were able to see that between these two seas the elevation varied smoothly about 11 meters, relative to the center of mass of Titan, consistent with the expected change in the gravitational potential. We are measuring Titan’s geoid. This is the shape that the surface would take under the influence of gravity and rotation alone, which is the same shape that dominates Earth’s oceans.”

Thus the seas form a sea level, although, again like Earth, smaller lakes can appear at elevations several hundred meters higher than Titan’s sea level — this suggests that the lakes are isolated from the seas. There is also evidence in the topographical work that Titan’s lakes within a given ‘watershed’ communicate with each other through the subsurface. The floors of empty lakes are all at higher elevations within a watershed than any nearby filled lakes. No empty lakes are found below nearby filled lakes because they would then fill. An active flow has to be at work here in the form of liquid hydrocarbons below the surface.

Formation cannot involve significant fluvial processes unless the widths of the resulting channels and/or valleys remain smaller than the ~300 m resolution of the Cassini RADAR. Regardless, fluvial channels cannot be the dominant method for removing material from the basin. Within a regional topographic basin, the lakes appear dynamically linked such that their fill state is determined by the elevation of their basin floors as compared to the local phreatic surface or impermeable boundary. 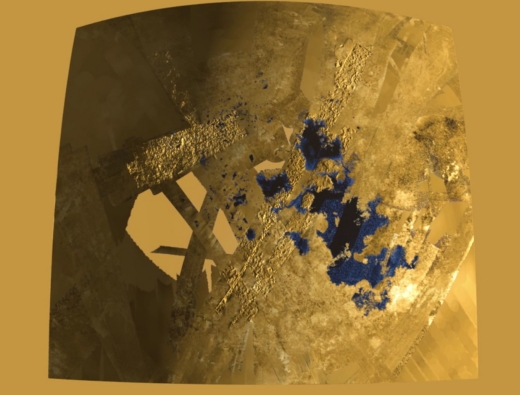 Image: This frame from a colorized flyover movie from NASA’s Cassini mission shows the two largest seas on Saturn’s moon Titan and nearby lakes. The liquid in Titan’s lakes and seas is mostly methane and ethane. Credit: NASA/JPL-Caltech/ASI/USGS.

Titan’s lakes, concentrated in the polar regions, prove to be curiosities. Most of them are in depressions with sharp edges that, says Hayes, “literally look like you took a cookie cutter and cut out holes in Titan’s surface.” The ridges surrounding the lakes can be hundreds of meters high in some areas, making the lakes topographically closed; they stand out starkly from the surrounding undulating plains. Understanding the process that shapes these lakes and their sharply defined edges will be key to making sense of the evolution of the polar basins on Titan. 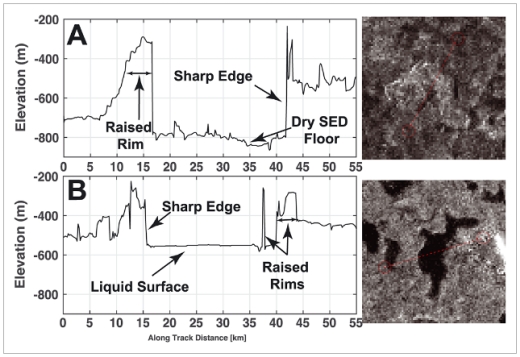 Image: This is Figure 1 from the “Topographic Constraints on the Evolution and Connectivity of Titan’s Lacustrine Basins” paper. Caption: Closest-approach altimetry profiles an unfilled and filled SED observed in (a) May 2007 (T30) and (b) April 2017 (T126), respectively. The profiles were processed to improve along-track resolution using the delay-Doppler algorithm described in Michaelides et al. (2016). Note that raised rims border the steep-sided depressions in both the empty and filled SEDs. Credit: Hayes et al.

The sharp-edged depressions, referred to in the paper as SEDs, are a unique feature of Titan, as the second of the two papers on the topographical map makes clear:

SEDs include the majority of Titan’s smaller lakes and are morphologically distinct from the larger, broad depressions (Hayes, 2016). The morphologic similarities between filled and empty SEDs have been used to suggest that dry SEDs represent previously filled, but now empty, lakes (Hayes et al., 2008). The spatial ubiquity and distinct morphologic expression of the SEDs make them a distinctive landform of Titan’s polar terrain (e.g., Aharonson et al., 2014).

First author Paul Corlies, a Cornell doctoral student, says that the data set aroused immediate interest among scientists, with the first inquiries about its use coming in within 30 minutes of the data being made available online. Out of this should come useful tweaks to our current models of Titan’s climate, as well as new work on interior models and studies of the moon’s gravity.