As Centauri Dreams readers know, I always keep an eye on the K2 mission, the rejuvenated Kepler effort to find exoplanets with a spacecraft that had originally examined 145,000 stars in Cygnus and Lyra. Now working with different fields of view, K2 has examined a surprisingly large number of stars, some 287,309, according to this Caltech news release. Digging around a bit, I discovered that each 80-day campaign brings in data on anywhere from 13,000 to 28,000 targets, all released to the public within three months of the end of the campaign. In the paper we’ll discuss today, this influx is referred to as a ‘deluge of data.’

Our datasets just continue to grow in a time of exploration that seems unprecedented in scientific history. I’ve heard it compared to the explosion in knowledge of microorganisms after their detection by van Leeuwenhoek in the 17th Century, though of course it also conjures up thoughts of early exploratory voyages as humans pushed into hitherto unknown terrain. But given that we are finding exoplanets in huge variety and by the thousands, this era surely has an edge because of the speed with which it is happening and its related search for life.

No wonder that public interest is high, and it’s gratifying to see projects like Exoplanet Explorers available (through the Zooniverse site) to serve as a platform for crowdsourced research. Exoplanet Explorers sifts through K2 data to look for transiting planets, with calibrated data files up through Campaign 14 (C14) and the uncalibrated data from Campaign 15 now available. The project, which went online for the first time last April, has already snagged, among other things, a highly interesting multi-planet system dubbed K2-138, and in a highly visible way. 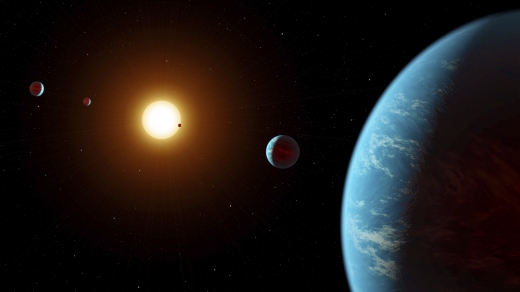 Image: Artist’s visualization of the K2-138 system, the first multi-planet system discovered by citizen scientists. The central star is slightly smaller and cooler than our sun. The five known planets are all between the size of Earth and Neptune; planet b may potentially be rocky, but planets c, d, e, and f likely contain large amounts of ice and gas. All five planets have orbital periods shorter than 13 days and all are incredibly hot, ranging from 425 to 980 degrees Celsius. Credit: NASA/JPL-Caltech/R. Hurt (IPAC).

Potential transit signals can be spotted by computers using signal-processing algorithms, but detections can be iffy. Many features that might seem to flag a transit can turn out to be astrophysical in origin, everything from eclipsing binaries to flare stars, pulsating variables, even cosmic-ray pixel strikes. We also have to account for instrument issues like spacecraft pointing drift. All this makes human eyes on the data a sensible idea, for the human brain is optimized for pattern matching and has proven successful at distinguishing between transits and artifacts.

Exoplanet Explorers runs a signal detection algorithm first to identify potential transit signals and then asks its users to examine the resulting candidates. K2-138 is the first K2 planetary system discovered by the project, and the first multi-planet system found entirely by crowdsourcing.

To help boost interest among the public, UC-Santa Cruz astronomer Ian Crossfield and Caltech staff scientist Jessie Christiansen worked with a British TV show, in co-production with ABC Australia, called Stargazing Live. Last April they introduced Exoplanet Explorers in a three-day event. The enthusiasm for crowdsourcing exoplanet research became immediately evident, as over 2 million classifications came in from more than 10,000 users, some of them analyzing the C12 dataset, which had yet to be examined by professional astronomers.

The quickly identified planet candidates included 44 Jupiter-sized planets, 72 Neptune-sized, 44 Earth-sized, and 53 ‘Super Earths.’ Each potential transit is looked at by a minimum of 10 volunteers using the Exoplanet Explorers platform, with each needing a minimum of 90 percent positive votes to proceed to further characterization. Crossfield and Christiansen determined to look for a signal likely to be confirmed for discussion on the show’s last night.

“We wanted to find a new classification that would be exciting to announce on the final night, so we were originally combing through the planet candidates to find a planet in the habitable zone—the region around a star where liquid water could exist,” says Christiansen. “But those can take a while to validate, to make sure that it really is a real planet and not a false alarm. So, we decided to look for a multi-planet system because it’s very hard to get an accidental false signal of several planets.”

Within the crowdsourced data, Christiansen and colleagues found a star with four planets, three of the four with 100 percent ‘yes’ votes from over 10 volunteers and a fourth with 92 percent. Having announced the discovery on Stargazing Live, the scientists went to work on K2-138, determining that the four planets orbit in a resonance, and finding a fifth planet on the same chain of resonances, with some possibility of a sixth. The five planets are all sub-Neptune in size, ranging from 1.6 to 3.3 Earth radii. All have periods under 13 days, making this an example of a tightly packed system of small planets. 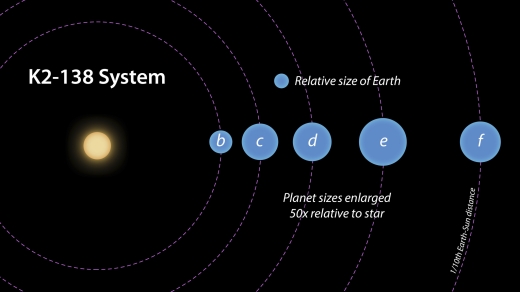 Image: Artist’s concept of a top-down view of the K2-138 system discovered by citizen scientists, showing the orbits and relative sizes of the five known planets. Orbital periods of the five planets, shown to scale, fall close to a series of 3:2 mean motion resonances. This indicates that the planets orbiting K2-138, which likely formed much farther away from the star, migrated inward slowly and smoothly. Credit: Credit: NASA/JPL-Caltech/R. Hurt (IPAC).

In a paper accepted at The Astronomical Journal, the scientists describe the discovery and characterization of the system, calling it:

…a compact system of five sub-Neptune sized planets orbiting an early-K star in a chain of successive near-first-order resonances; in addition, the planets are locked in a set of three-body Laplace resonances. The planets may be accessible to mass measurement via dedicated radial velocity monitoring, and possibly via TTVs with improved timing precision.

and going on to note:

The Exoplanet Explorers project has provided an additional 68 candidate planets from the C12 light curves that likely contain additional planet discoveries, and we plan to upload potential detections for consideration from the rest of the available K2 campaigns.

These may be interesting planets, as the paper notes, for atmospheric characterization. In any case, multi-planet systems are useful as laboratories for planet formation, allowing us to test models of migration and system evolution. Caltech’s Konstantin Batygin, who was not involved in the paper, points to the “…rather gentle and laminar formation environment of these distant worlds.” It’s an interesting point also echoed by Christiansen. Chaotic scattering of materials in an early planetary system seems unlikely to produce quite so orderly a configuration.