The wrong initial assumption can easily lead anyone down a blind alley. The problem comes across loud and clear in new work from Marc Kuchner (NASA GSFC) and colleagues, which Kuchner presented at the recent meeting of the American Astronomical Society in Washington. At issue is the matter of the disks of gas and dust around young stars, in many of which we can find patterns such as rings, arcs and spirals that suggest the formation of planets.

But are such patterns sure indicators or merely suggestions? Kuchner’s team has been looking at the question for several years now, presenting in a 2013 paper the possibility that a phenomenon called photoelectric instability (PeI) can explain the narrow rings we see in some disk systems. PeI happens when high-energy ultraviolet light strikes dust and ice grains, stripping away electrons. The electrons then strike and heat gas in the disk, causing gas pressure to increase and more dust to be trapped. Rings can form that begin to oscillate, along with arcs and clumps — bright, moving sources of light that could be mistaken for planets.

Photoelectric instability is a cascading phenomenon as rising gas pressure affects the orbiting dust, with clumps forming with many times the dust density found elsewhere in the disk. In the new paper, submitted to The Astrophysical Journal, Kuchner and Wladimir Lyra (California State University) worked with Penn State doctoral student Alexander Richert to factor in radiation pressure.

Photons have no mass but they do convey momentum. Conceive a dust particle as a tiny solar sail and consider how that momentum can push the dust surrounding a young star into highly eccentric orbits. The team shows that by including radiation pressure in their model, spirals like those found around the star HD 141569A, a star studied in the 2013 paper, can be created. These do not necessarily indicate a planet. 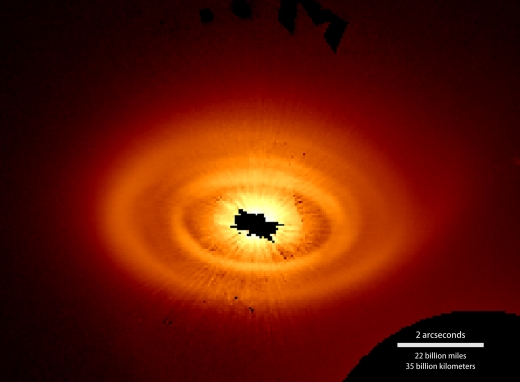 Image: Arcs, rings and spirals appear in the debris disk around the star HD 141569A. The black region in the center is caused by a mask that blocks direct light from the star. This image incorporates observations made in June and August 2015 using the Hubble Space Telescope’s STIS instrument. Credits: NASA/Hubble/Konishi et al. 2016.

“Carl Sagan used to say extraordinary claims require extraordinary evidence,” Lyra said. “I feel we are sometimes too quick to jump to the idea that the structures we see are caused by planets. That is what I consider an extraordinary claim. We need to rule out everything else before we claim that.”

We can now view some prominent disk structures with an eye toward photoelectric instability, as the paper notes:

…the non-axisymmetric clumps and spiral arms seen in the gas distributions in several of our models suggest that interactions between gas and small-to-medium grains could underlie the asymmetric structures seen in the 49 Ceti and AU Mic edge-on disks (Hughes et al. 2017; Boccaletti et al. 2015), though explanations for the AU Mic moving blobs involving only rocky body collisions (no gas) have also been proposed (Sezestre et al. 2017; Chiang & Fung 2017). We also underscore that so far the PeI is the best candidate for producing arcs, a feature that is not predicted from planet-disk interaction. That the PeI leads to arcs was predicted by Lyra & Kuchner (2013), before the discovery of these features in the disk around HD 141569A (Perrot et al. 2016).

We’ve got a long way to go in studying these phenomena, and the new paper casts a critical eye on what physical processes and parameters still need to be explored, among them turbulence and varying types of dust and gas. This roadmap of future work should be useful, particularly as we try to extend these simulations beyond stars like the Sun into the realm, for example, of A-class stars. The point is that untangling the numerous conceivable interactions in young disks is necessary before we can construct truly accurate models of planet formation.

…planet–disk interactions in optically thin disks may manifest themselves very differently than they do in existing, simpler models. The formation of gaps, rings, and other disk morphologies associated with planets may be inhibited, enhanced, or otherwise affected by the presence of gas.

Go easy on the assumptions, in other words, and tune up the modeling of infant stellar systems. What looks for all the world to be planets in formation may yet prove an earlier stage of system evolution. Run on the Discover computing cluster at NASA GSFC, the Kuchner team’s simulations are showing just how complicated the interactions in a young disk can be.

The paper is Richert et al., “The interplay between radiation pressure and the photoelectric instability in optically thin disks of gas and dust,” submitted to The Astrophysical Journal (preprint). The 2013 paper is Kuchner and Lyra, “Formation of sharp eccentric rings in debris disks with gas but without planets,” Nature 499 (11 July 2013), pp. 184-187 (abstract). Kuchner also heads up a citizen science project called Disk Detective that has produced 2.5 million classifications of potential disks.