A new project called Exoplanets in Transits and their Atmospheres (ExTrA) has been set in motion at the European Southern Observatory’s site at La Silla (Chile). Funded by the European Research Council and the French Agence National de la Recherche, ExTrA’s three 0.6-metre telescopes will be operated remotely from Grenoble, France. This is an exoplanet transit effort centered around finding and characterizing Earth-sized planets orbiting M-dwarf stars.

Not an easy task from the ground, as lead researcher Xavier Bonfils makes clear, though if you’re going to attempt it, northern Chile offers optimum conditions:

“La Silla was selected as the home of the telescopes because of the site’s excellent atmospheric conditions. The kind of light we are observing — near-infrared — is very easily absorbed by Earth’s atmosphere, so we required the driest and darkest conditions possible. La Silla is a perfect match to our specifications.”

To do its work, ExTrA weds spectroscopic information to traditional photometry. The collected light from the target star is fed through optical fibres into a multi-object spectrograph. Known as differential photometry, the method involves collecting light not only from the target but also from four comparison stars. The comparison helps the technology filter out atmospheric distortions and effects produced by the instruments and detectors themselves.

Image: A new national facility at ESO’s La Silla Observatory has successfully made its first observations. The ExTrA telescopes will search for and study Earth-sized planets orbiting nearby red dwarf stars. ExTrA’s novel design allows for much improved sensitivity compared to previous searches. Astronomers now have a powerful new tool to help in the search for potentially habitable worlds. Credit: ESO.

“With the next generation of telescopes, such as ESO’s Extremely Large Telescope, we may be able to study the atmospheres of exoplanets found by ExTra to try to assess the viability of these worlds to support life as we know it. The study of exoplanets is bringing what was once science fiction into the world of science fact.”

And while we’re talking about M-dwarfs, a new paper is out looking at one of the most interesting systems yet discovered, comprising the seven planets around TRAPPIST-1. Lead author Amy Barr (Planetary Science Institute) and colleagues go to work on the interior structures of these planets as well as their tidal heating and convection given what we know about their mass and radius. The balance between tidal heating and convective transport has implications for the mantles of each planet. 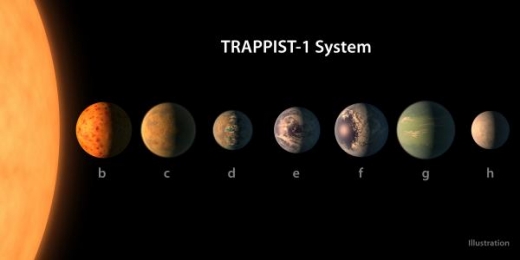 Image: A size comparison of the planets of the TRAPPIST-1 system, lined up in order of increasing distance from their host star. The planetary surfaces are portrayed with an artist’s impression of their potential surface features, including water, ice, and atmospheres. The paper from Amy Barr, Vera Dobos and László L. Kiss shows that planets d and e are the most likely to be habitable due to their moderate surface temperatures, modest amounts of tidal heating, and because their heat fluxes are low enough to avoid entering a runaway greenhouse state. Planet d is likely covered by a global water ocean. Credit: NASA/R. Hurt/T. Pyle.

Given that their orbits are slightly eccentric, there is the possibility of tidal heating, which in the Galilean moons has intrigued us for its possibilities at providing an energy source for life beneath an icy crust, and indeed, the paper notes that “…on planets b, e, f, g and h, life might appear in the tidally heated (subsurface) ocean close to hydrothermal vents.“

In the TRAPPIST-1 system, though, we have much to learn about the composition of the respective worlds. The Barr paper examines the limits of present knowledge:

Assuming the planets are composed of water ice, rock, and iron, we determine how much of each might be present, and how thick the different layers would be. Because the masses and radii of the planets are not very well-constrained, we show the full range of possible interior structures and interior compositions.

The paper is a thoroughgoing examination of the TRAPPIST-1 planets, with planets d and e flagged as the most likely to produce habitable conditions. Here tidal heating would be modest and heat flux low enough to avoid runaway greenhouse conditions:

Planet d is likely to be covered by a global water ocean, and can be habitable if its albedo is ≳ 0.3. Planetary albedos may be estimated from photometric measurements during occultations (see e.g. Rowe et al., 2008) which may give an additional constraint on the habitability of TRAPPIST-1d. As discussed in Section 5, planet e is likely to have liquid water on its surface, too, according to climate models (Turbet et al., 2017; Wolf, 2017).

Planets f, g, and h, the authors believe, are rich in H2O, possibly containing liquid water oceans beneath a thick ice mantle. Planets b and c likely harbor magma oceans in their interiors. Planet b in particular demands further work, given its proximity to the central star and its “seemingly water-rich composition,” while c may experience eruptions from its magma ocean, a phenomenon that may eventually become detectable.

But note how far we have to go:

Our knowledge of the compositions of the four interior planets, chiefly, their water content, can significantly be improved if their masses can be determined to within ∼ 0.1 to 0.5M⊕, which will require further observations of the TRAPPIST-1 system.

The paper is Barr et al., “Interior Structures and Tidal Heating in the TRAPPIST-1 Planets,” accepted at Astronomy & Astrophysics (preprint).