Thinking about Ursula Le Guin takes me to a single place. It is a snow-driven landscape, a glaciated world of constant winter called Gethen, whose name means ‘winter’ in the language of its people. I was reading The Left Hand of Darkness while snow pelted down outside one afternoon in upstate New York, waiting for my wife to get back from her teaching job, nursing a cup of tea and finding my mental location fusing with Le Guin’s fascinating world. 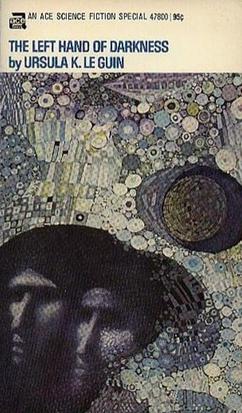 For The Left Hand of Darkness was a spectacular introduction to Le Guin. I had seen her name and even had, somewhere in the stacks, a copy of her first novel, Rocannon’s World (1966), part of an Ace Double that I never got around to reading. The Left Hand of Darkness came out in 1969 but it was in the late 70’s that I read it. I had been through “The Word for World is Forest” when reading Again, Dangerous Visions (1972), one of Harlan Ellison’s anthologies, and although it won a Hugo Award in 1973, I hadn’t found it as much compelling as didactic and all too linked to its era.

I just wasn’t, in other words, prepared for The Left Hand of Darkness, which explores a world in which the inhabitants have no fixed sex. I had read Samuel Delany’s Triton (1976), which deals in some of the same themes, without enthusiasm — I would learn later that Delany saw connections between the novel and Le Guin’s later novel The Dispossessed (1974) — although positing a world where people can change appearance and gender at will provided Delany with vast terrain for exploration.

Image: Front cover of the first edition, with art by the Dillons. Cover depicts two faces against an abstract background. Credit: Wikimedia Commons.

What made The Left Hand of Darkness stand out for me was simply the quality of its prose. Le Guin wrote the novel without sacrificing narrative flow, mining her subject with the gaze of a person who had been raised by two anthropologists (her mother’s book Ishi in Two Worlds (1960) had been widely acclaimed for its look at Californian Indian culture), but she was much more than a chronicler of scientific detail. A dispassionate eye couples in the novel with an explorer’s growing wonderment at place, at people. And the language…

Even as I think this the world’s sun dims between clouds ragathering, and soon a flaw of rain runs sparse and hard upriver, spattering the crowds on the Embankment, darkening the sky. As the king comes down the gangplank the light breaks through a last time, and his white figure and the great arch stand out a moment vivid and splendid against the storm-darkened south. The clouds close. A cold wind comes tearing up Port-and-Palace Street, the river goes gray, the trees on the Embankment shudder. The parade is over. Half an hour later it is snowing.

I can’t speak about The Dispossessed (1974) because I’ve never read it. In fact, there is a great deal of Le Guin I haven’t read. But when the writer died on Monday, I was reminded of my frequent intention of getting into her essays. A new volume called No Time to Spare: Thinking About What Matters had gone on my Amazon wishlist as soon as I saw it in 2017, but I also wanted to cycle back around to her Earthsea series.

As for The Left Hand of Darkness, though, what sticks with me as well as the evocation of place and the vivid sense of snow is the idea behind its civilization. The Hainish universe, beginning with Rocannon’s World, assumes that humans evolved not on Earth but on a planet some 140 light years away called Hain. Because its inhabitants colonized many stellar systems, the possibility was strong that any exploratory vessels from Earth would encounter populations that had been seeded as we had on their worlds. The effort becomes one of re-creating a lost interstellar civilization, using starships traveling close to the speed of light.

I’m told that the ansible was introduced in Rocannon’s World as a way of communicating instantaneously, so a civilization otherwise bound by lightspeed could manage its affairs. Many authors have used an ansible in their work since (and I also think of Dave Langford’s science fiction news and tip-zine of the same name). Le Guin’s galactic civilization becomes known as the Ekumen by the time of The Left Hand of Darkness, comprising fully 83 worlds. 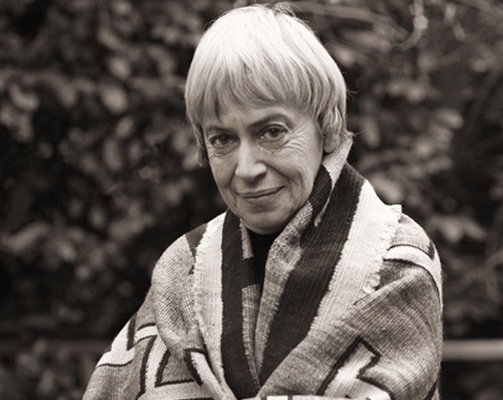 I like the fact that Le Guin contrasted science fiction, which she insisted could be serious literature, with some of the creative-writing-workshop fiction that is all too easily churned out today:

“The thing to remember, however exotic or futuristic or alien the mirror seems, is that you are in fact looking at your world and yourself. Serious science fiction is just as much about the real world and human beings as realistic novels are. (Sometimes more so, I think when faced with yet another dreary story about a dysfunctional upper middle class East Coast urban family.) After all, the imagination can only take apart reality and recombine it. We aren’t God, our word isn’t the world. But our minds can learn a lot about the world by playing with it, and the imagination finds an infinite playing field in fiction.” Interview, Electric Lit, August 7, 2014

The Left Hand of Darkness took both Hugo and Nebula awards and became a fixture wherever science fiction was taught in the academy, surely the first SF novel to do so. No less a figure than Harold Bloom described the book in his monumental The Western Canon. I may not be the only writer who sees Le Guin invariably through its lens.

The New York Times has a fine obituary for Le Guin, as does the Washington Post, but if you want to get to know her views up close, read John Wray’s interview in the Paris Review. What a fine, spirited person! Here Wray, who is no slouch at working science fictional elements into his own novels, asks her about the genre:

I don’t think science fiction is a very good name for it, but it’s the name that we’ve got. It is different from other kinds of writing, I suppose, so it deserves a name of its own. But where I can get prickly and combative is if I’m just called a sci-fi writer. I’m not. I’m a novelist and poet. Don’t shove me into your damn pigeonhole, where I don’t fit, because I’m all over. My tentacles are coming out of the pigeonhole in all directions.