Europa’s Surface: Problems for a Lander?

What do asteroids 44 Nysa, 64 Angelina and the Galilean satellites Io, Europa and Ganymede have in common? They are all Solar System objects without an atmosphere that are highly reflective. They are also the subject of study in a new paper from Robert Nelson (Planetary Science Institute) that investigates a feature common to all: At small phase angles (the angle from the Sun to the target being observed), they show negatively polarized light.

Light reflected from objects in the Solar System is usually polarized, meaning that the electric and magnetic vibrations of the electromagnetic wave occur in a single plane. The amount of polarization depends upon the reflective material, but also on the geometry, as a good astronomy textbook makes clear (I’m checking against Karttunen et al.’s Fundamental Astronomy, 6th ed., 2016).

Image: The phases of Rhea. Emily Lakdawalla used these Cassini images to explain phase angle in a useful 2009 backgrounder. Her caption: The angle from the Sun, to a moon, to the observer is called “phase angle.” This montage shows Saturn’s moon Rhea as seen by Cassini through a clear filter at a variety of phase angles. The images have been resized to a constant pixel scale and rotated so that the terminator is up-and-down; the images sample a variety of latitudes and longitudes. Credit: NASA / JPL / SSI / montage by Emily Lakdawalla.

Polarization at phase angles of greater than about 20° from a body without an atmosphere are positive, while closer to opposition, the polarization is negative. Looking at the polarization behavior of the Jovian moons and asteroids he studies, Nelson and team deduce that their long-observed negative polarization at low phase angles can be explained by extremely fine-grained particles with void space above 95 percent. The surface material, in other words, would feature grain sizes on the order of the wavelength of light of the observations, or a fraction of a micron.

The inference is that these objects are covered with material that is less dense than newly fallen snow. This is a significant result, given that in the long term, we have hopes of placing a lander on Europa that can explore some of the intriguing surface material that may represent upwellings from the ocean below. The question becomes: Would a lander simply sink into the surface before it could do its work?

“Of course, before the landing of the Luna 2 robotic spacecraft in 1959, there was concern that the Moon might be covered in low density dust into which any future astronauts might sink,” Nelson said. “However, we must keep in mind that remote visible-wavelength observations of objects like Europa are only probing the outermost microns of the surface.” 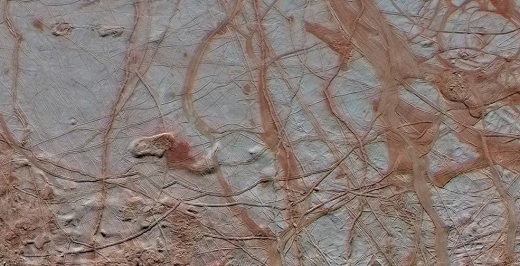 Notice that three Galilean satellites are implicated in this work, meaning that we may have comparable issues at Io and Ganymede. Nelson’s reminder of the Luna 2 landing has in turn reminded me of a 1963 novel by Jeff Sutton called Apollo At Go, an extrapolation based on where the manned space program was at that time of what a lunar landing might involve. Here, too, we had dust as a major feature, this time of a science fiction plot. Indeed, the cover blurb for the book includes this look at a projected first lunar landing: 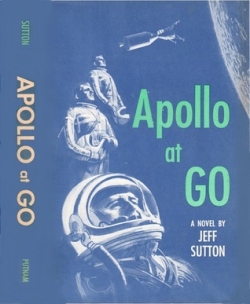 They were hurtling over it, hurtling and dropping. He fought his harnessing to learn closer to the port… There a small crater, here a hill, a crevice, a milky rectangle that looked absolutely smooth and rock hard — this was an inferno without fire, a hell, the architecture of a maddened nature. The House of Lucifer…

“May says zero on the fuel. Still going down. Trying to hold steady, but can’t. Ash looks deep, deep… Rocks right next to us jagged and — Oh, there she goes… main engines off. Small jets can’t… We’re falling…”

Sutton, a newspaperman, public relations professional and former Marine, may have been wrong about the dangers posed by the lunar surface, but he was spot on in a different regard. He sets up his Moon landing on July 8, 1969, just twelve days before the actual event. And as to the dust, he was actually writing before we had enough data from the Soviet Luna program and the Surveyor landings to ease scientists’ worries. Let’s hope we’re as well informed about Europa’s surface against the day when our first robotic lander sets down there.